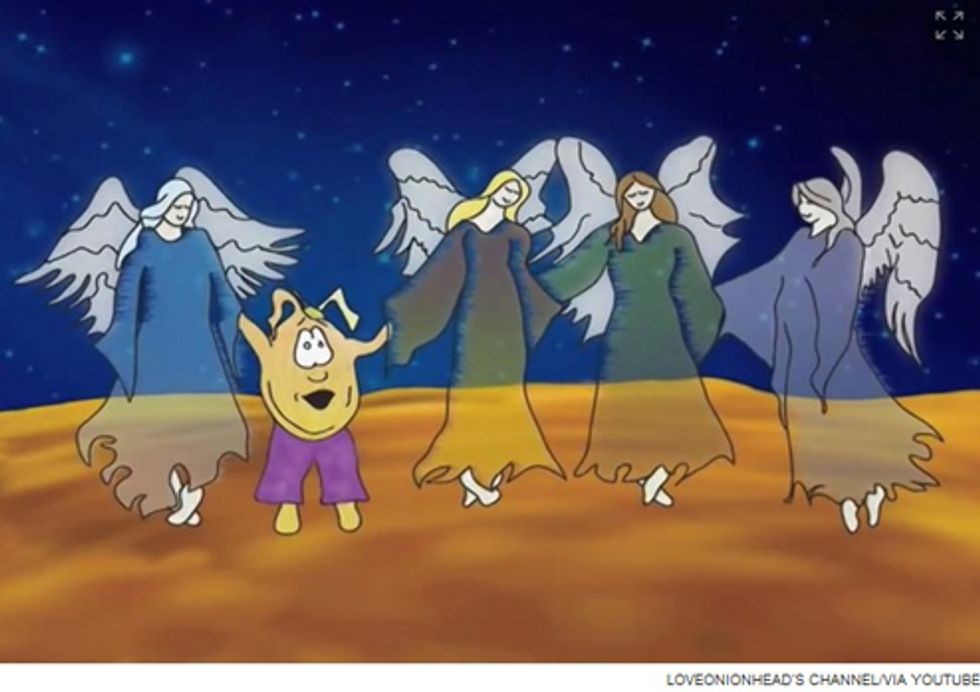 Looks like Big Government is trying to impose secularism on yet another business whose owners simply ask that they be allowed to practice their faith, and also to make sure their employees do, too. This may sound a lot like the companies that object to paying for slut pills, except this time you don't have a bunch of fundagelicals complaining about godless government tyranny, because the religion in question is a bunch of New-Agey Cosmic Muffin cowflop.

The women said they were forced out of their jobs because they refused to take part in workplace religious rituals – such as prayer circles, thanking God for their jobs, and saying “I love you” to managers and co-workers.

In addition, the suit alleges that employees were required to read spiritual texts, burn candles, and talk about their personal lives with co-workers, all part of something called “Harnessing Happiness,” which the organizer's website says is "dedicated to teaching problem solving skills, conflict resolution and appropriate behavior through emotional awareness." So maybe it's just a set of "personal growth" techniques, and totes not a religion at all? Maybe! Then again, the website also suggests that its educational materials can bring about "a decrease in violence, suicide, depression, addiction and we will see an increase in love, respect, honor, peace and happiness" and that "More often than not, through our work, we miraculously witness incredible transformation and transmutation." So if they're turning lead into gold, we bet OSHA should give them a look, too.

The "Onionhead" character is the group's mascot, which one of the developers created for their 2-year-old, because of course a 2-year-old needs spiritual guidance from an anthropomorphic onion:

Onionhead was developed by a mother-daughter team over 20 years ago. The mother, conceived the idea for adults. Her 2 year old grandson, considered a spectrum child, demanded that Onionhead be done for children. So the daughter, an artist and writer, birthed the character. They used some of their challenging life experiences and their wonderful relationship as basis for the tools, programs and stories.

After many years, the Onionhead family has grown. Each member holds up love and accountability not only for what we do but how we do it. We, as a team, are committed to creating a world of non-violence by empowering loving feelings. We knew that to change the world, we must first change ourselves. We therefore use Onionhead every day, as a way to better understand ourselves and each other.

That pretty much screams, "totally not a cult, no way, not us! Spiritual growth! Dilute! Dilute!"

See also this charming video, which manages to be creepy, filled with crappy pop psychology, and ALSO gets science completely wrong:

Sorry, creators of Onionhead, there is gravity on the moon, and you are idiots.

As for the nice folks at United Health Programs of America, the lawsuit claims that a cost containment manager identified only as "Denali" led the Onionhead sessions or whatever you'd call them at work. If you can't trust someone named after a mountain or an SUV to be your workplace spiritual advisor, who can you trust?

Former employees Elizabeth Ontaneda, Francine Pennisi, and Faith Pabon said Denali retaliated against them when they balked at attending one-on-one sessions with her to discuss “divine plans” and “moral codes.”

Pennisi said she spoke out against Onionhead at a company meeting, suggesting the practices violated her Catholic beliefs, and she claims she was moved from her office and replaced by Denali with a large statue of Buddha.

All three women were demoted and later fired, the suit claims.

Ah, but there is another side to all this, says Denali Jordan, who told the New York Daily News that no way is Onionhead a "religion." (It is, as the website very clearly says, a 501c3 nonprofit, duh.) In a phone interview, Jordan explained that she's just an "independent consultant" to the company, and that the company is the real victim:

"This (complaint) has been going on for years and it is based on untruths and money," Jordan told The News. "The EEOC just likes going after companies and causing problems. There will be something good that comes from this that helps others."

"It hurts my soul ... From my heart to yours, thank you for calling," she said.

Why won't these mean ladies stop hurting people's souls by complaining about the happy funtimes New Age woo at work? It seems awfully unfair. Besides, where would anyone get the crazy idea that this stuff has anything to do with religion, except maybe from their dumb videos?

Follow Doktor Zoom on Twitter. He oughta form a cult. But who'd want to attend the Temple of Zoom?