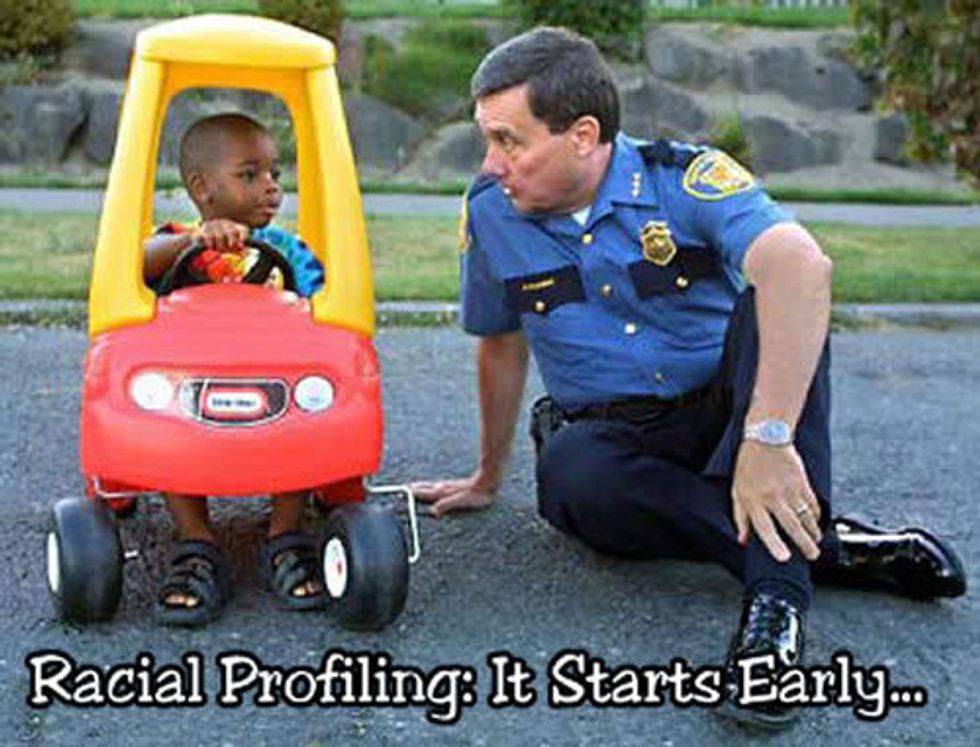 NYPD officers and Barney's Department Store did their best to encourage hard work among urban youth this week when the storeaccused a black teen of using a counterfeit debit card to pay for a designer belt. In reality, the card was legitimate, and Trayon Christian, 19, was spending his paycheck on a $350 Ferragamo belt because he had the mistaken notion that black nineteen-year-olds are free to spend their own money as they want to, even on luxurious fripperies. Ah, the innocent follies of youth! Doesn't he know that if you work hard in America, you are free to be understanding when white people make the reasonable assumption that black kids with money are thugs and crimers?

The New York Daily News reports that Christian is suing Barney's and the NYPD over the incident:

The fashion-forward teen, who lives with his mom in Corona, Queens, is studying engineering at the New York City College of Technology, where he had a work-study job.

Christian said his paycheck had just been direct deposited into his Chase bank account, so he went straight to Barneys on the afternoon of April 29 to buy the pricey Ferragamo belt with a silver buckle and a reversible black and white strap.

“I knew exactly what I wanted,” Christian said. He’d seen the belt on a lot of his favorite celebrities, including rapper Juelz Santana.

He paid with his debit card, showed a photo ID to verify his identity, signed for the purchase, and left. A block away from the store, two plainclothes NYPD detectives, apparently not needed for anything more important than making sure a black kid doesn't dress above his station, arrested him.

“They said my card wasn’t real, it was fake. They said someone at Barneys called to report it,” said Christian.

“The detectives were asking me, ‘How could you afford a belt like this? Where did you get this money from?’” he said.

He was handcuffed and taken to the 19th Precinct stationhouse, he said.

According to his lawsuit, he was detained in a holding cell for about two hours.

He was then released with his debit card, his belt and an apology from the police, Christian said.

A few days after the incident, Christian returned the belt for a refund, and says he's never shopping at Barney's again, which as a commenter at Gawker notes, is almost certainly just what the store wanted all along.

But hey, he was never charged, and wasn't even tased, so why is he even making a fuss? Shouldn't he just recognize that, as a black male hauled in by the NYPD, he was lucky not to have been sodomized with a broom handle?

Even though we question his shopping priorities -- no one needs a $350 belt -- we're hoping that Christian gets a bundle in a settlement. This is America, and working for a living is definitely a chump's game.