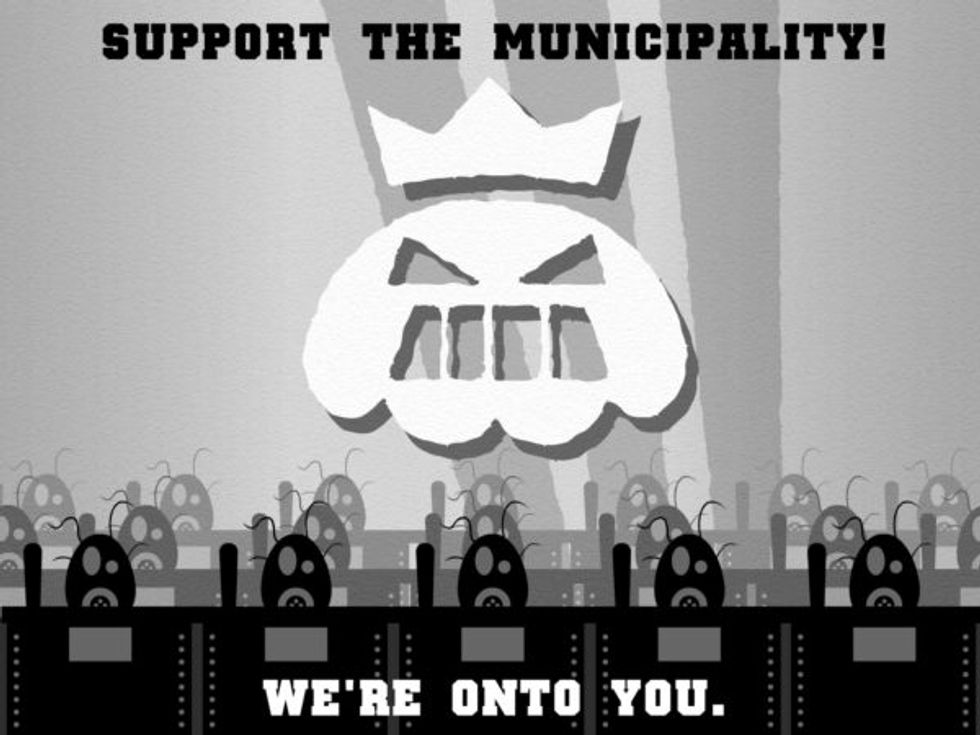 Welp, folks, we're getting past last week's tragedies a day at a time, and now it's time to come together to build stronger communities, heal racial rifts and improve support for better law enforcement.

Or, if you're noted radio loon Alex Jones, it's time to make up a bunch of crap about how the Commies are exploiting police killings to come for your freedoms.

Jones, impresario of the conspiracy-porn site InfoWars.com, shared his Deep Thoughts via Facebook Live on Friday. Turns out the Obama administration plans to use the killing of five Dallas police officers by a deranged gunman to support a long-laid plot to federalize all law enforcement. This will help bring about the one-world socialist government that George Soros and his fellow Marxist Elders of Zion have spent fortunes to create, natch:

This is a globalist, leftist takeover. That’s what it is.

A destabilization program, a civil war in the making. It’s already here.

This is the beginnings of it. We’ve been trying to stop it. This is a United Nations, globalist program where they bring in the refugees, where they sue Sheriff Arpaio, where they run the departments, where they bully and intimidate you and even organize their thugs to shoot and kill you until you bow down and listen to Obama, and Hillary, and Jesse Jackson, and say you know what, you’re right, you’re right, we need to reform ourselves, we’ll do whatever you say, just call off the dogs.

What the eff is he even babbling about, you may well ask? Well, sheeple, you obviously have not been paying attention to what Obama has been up to. If you had, you'd know about his "President's Task Force on 21st Century Policing," ostensibly set up to improve local policing in the wake of the 2014 Michael Brown shooting in Ferguson, Missouri. InfoWars helpfully explains this is actually an effort to eliminate local, freedom-loving government and replace it with Obama's jackbooted federal goons.

You might have thought that Obama had used a thoughtful process to help spread reforms like those that improved Dallas's relationship between police and the community. You probably believe in goofy theories like "evolution" and "gravity," too, but InfoWars is not so gullible.

We are a little disappointed that Jones merely blamed Obama for organizing Black Lives Matter, thus inevitably encouraging a "thug" assassin to murder police officers. InfoWars is generally good at promoting "false flag" conspiracy theories, and we were hoping for Chinese Army assassins colluding with paid crisis actors or something.

Never fear, that's out there on even fringier fringes of the luniverse. Dave Hodges of the hilariously named "Common Sense Show" points out how obviously fake the Dallas "shootings" were, since there was an active-shooter drill at a high school 40 miles away a week earlier. C'mon, how much more do you need it spelled out?

And sure, it's hard to grasp how so profound an event could have so meaningless and petty a cause -- a delusional, anger-filled lone wolf "inspired" by the microscopic fringe of black-separatist hate groups. Even some Black Lives Matter activists initially mused on conspiracy theories to try to make some sense of it.

But Jones's broken record on how this is all about the commies taking over is less despicable than the obsessive cataloging of #BLM tweets by Dead Breitbart's Wonder Trumporium. Those smarmy wankers, like America's least favorite human-rat hybrid, are feverishly trying to conflate the Black Lives Matter protests with a handful of black hate groups, which they imply are bringing us to the brink of a race war.

Gross, we need a shower now.