Obama And Pelosi Throwing All The Shade At Dumb James Comey, And It Is LOL 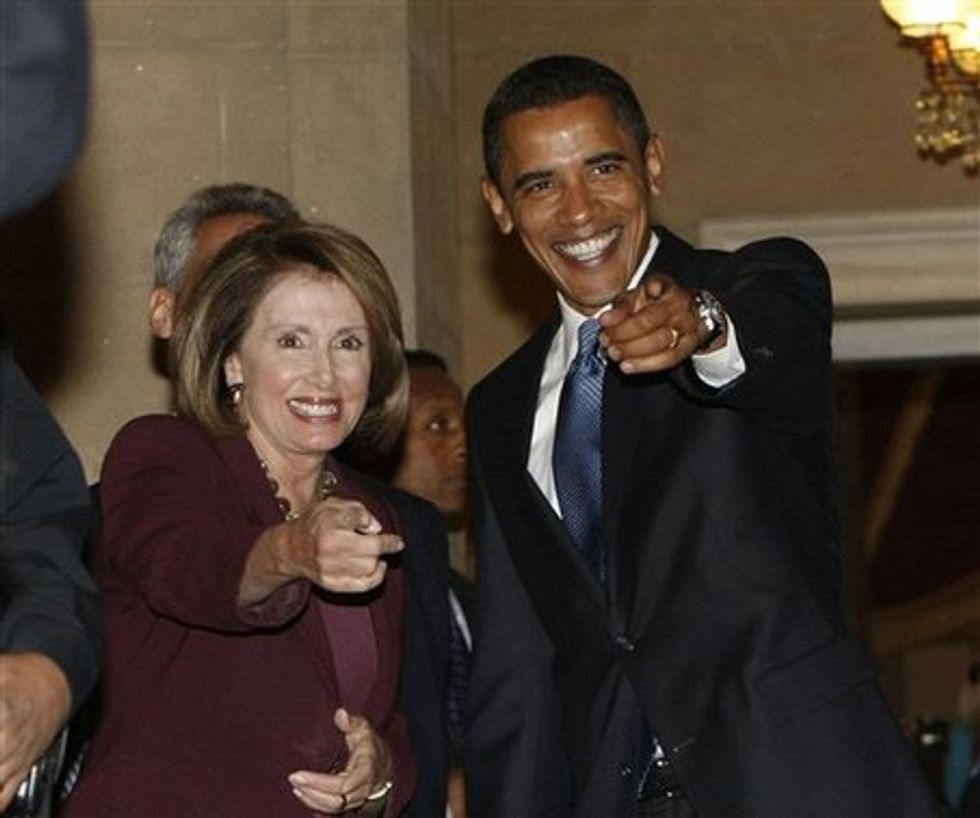 Lots of people have been kind of annoyed with President Bamz the past few days -- like not annoyed enough to stop loving him madly forever and ever, just perturbed -- because he appeared to be Standing By His Man in refusing to criticize FBI Director James Comey for being a politics-playing douche-snort and meddling in the election by revealing to the American public that Hillary Clinton and Huma Abedin did some emailing about stuff, BREAKING SCANDAL NEWS! Here's what White House Press Secretary Josh Earnest said on Monday:

"I'll neither defend nor criticize what Director Comey has decided to communicate to the public about this investigation," White House press secretary Josh Earnest said in Monday's press briefing.

Some Democrats have been like "HELP US BARRY, YOU'RE OUR ONLY HOPE!" We haven't been mad at Obama, though, becaue we just figured he was doing a public and private position like a common Hillary Clinton, and that behind the scenes he was livid, designing his One Million-Dimensional Chess Game Plan to deal with Comey in the proper way.

But Obama has now spoken up, in an interview with NowThis News! The preznit of America has some things to share with his ding-dong FBI director about FBI-ing, How Does IT Work? But just like Bamz and Michelle Obama do when they're talking about Trump, HE DIDN'T EVEN SAY COMEY'S NAME. Ooh girl, Barry just put you in the TRUMP ZONE, I know that's right!

'We don't operate on innuendo' — President Obama discusses Hillary, emails, and the FBI in an exclusive interview with NowThis pic.twitter.com/0J6tJyEYSh

I've made a very deliberate effort to make sure that I don't look I'm like meddling in what are supposed to be independent processes for making these assessments. Setting aside the particulars of this case ...

[wonkbar]<a href="http://wonkette.com/608161/dear-fbi-are-you-fcking-kidding"></a>[/wonkbar]Innuendo? CHECK! Incomplete information? YEP YEP YEP! Leaks? Well, one of Comey's BS justifications for breaking the news that sometimes Huma and Hillary email each other (!!!!) was that it might have been leaked by rogue fuckers in the agency if he hadn't, so we're gonna go ahead and say that applies here too! Oh and there was that weird thing where the FBI tweeted some bullshit about an ages-old case involving Bill Clinton where no wrongdoing was found, so there's that.

Before sticking it to Comey, Obama talked about Clinton Email Derangement Syndrome, an epidemic that renders one million wingnuts PER YEAR unable to live normal lives without crying dumb tears about Hillary every single waking moment:

You know, the fact of the matter is that Hillary Clinton, having been in the arena for 30 years, oftentimes gets knocked around and people say crazy stuff about her, and when she makes a mistake, an honest mistake, it ends up being blown up as if it's just some crazy thing, and so I understand why if you are voting for the first time or even the second time, you know, all that noise coming at you, you think, oh well, there's something maybe I should be worried about.

Yeah. Like "emails." PFFFFFFT, GET A LIFE. Anyway, Obama said he has "absolute confidence in [Hillary's] integrity," end of story, can this election be over now?

OK, so Barry Bamz's method of throwing shade is JUST SAYING this is not how America is supposed to work, not that he's specifically naming names, but you know who he's talking about, cough cough James Comey! cough cough cough.

NANCY PELOSI, on the other hand, is a hair more direct:

Maybe he's not in the right job," Pelosi said.

Maybe there's a janitorial position for him or maybe somebody could pay Comey to KISS HILLARY'S ASS when she's president, not that Pelosi is suggesting anything of the sort. That was definitely yr Wonkette who said that.

What about Huma Abedin, did Hillary do a bad by being BFFs with her, Speaker Pelosi?

YA BURNT! Huma probably agrees with that, though.

Anyway, the point of this post is this moving picture right here: