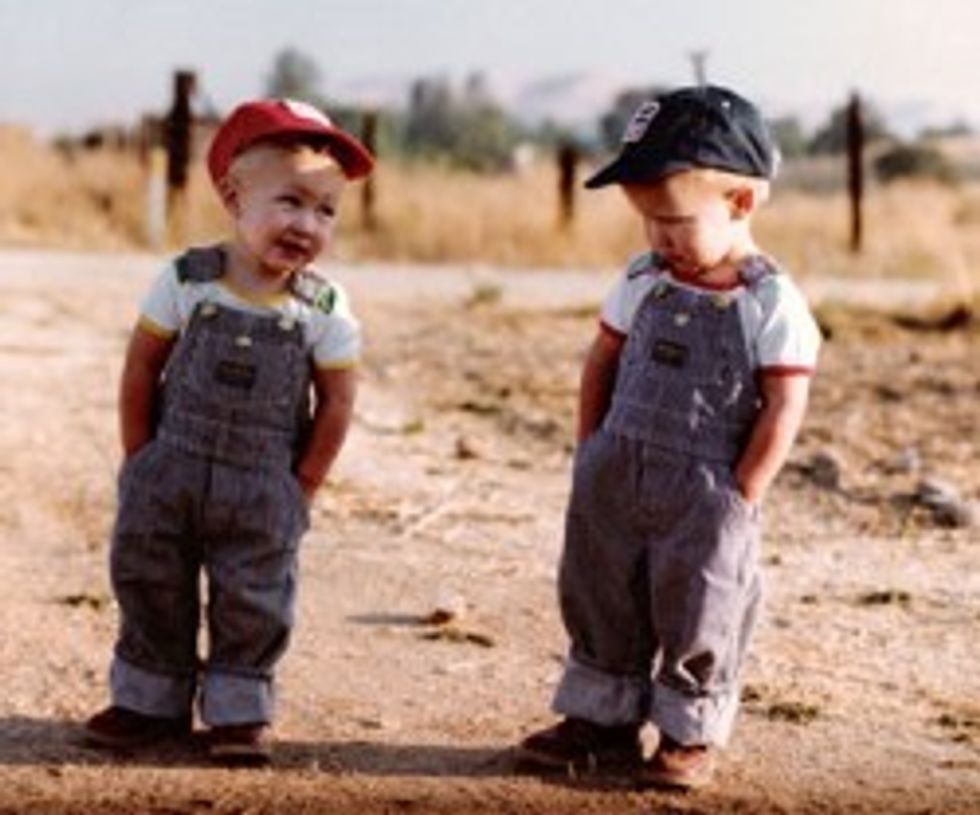 Yesterday, late-night television, today, THE FAMILY FARM! President Obama is on a quest to ruin all the fun the conservatives are having now they've got a/their man, and the latest method is to tell people who own farms that their children can't necessarily work on them because they are children? Crazy. "For generations children and adults have worked together on the family farm. Those days are over," writes The Gateway Pundit, even though of course there are plenty of conservatives coming to the aid of farmers great and small (in stature) now. And of course the proposed bill, sponsored by Republicans John Thune (SD) and Jerry Moran (Kansas) has the word "preserving" in it, because if they could submerge 1950s-or-so America in formaldehyde and seal it in an airtight container forever, well, they would.

The Department of Labor announced last year that it was planning to restrict child labor on farms so that children under 18 could no longer be involved “in the storing, marketing and transporting of farm product raw materials," among other things. The opposing argument goes something like, "Come on, there aren't that many farm accidents, and they can so study American history and drive tractors at the same time!" And also, perhaps, that Monsanto with its Dalek employees will continue to rule the world because robots are more efficient than children and without the children the family farms will be really powerless. Yes, all of a sudden conservatives are really against big corporations monopolizing industries, isn't it lovely?

The bottom line is...MARXISM. Someone from Canada, of all places, has chimed in, declaring that Obama's proposal "comes straight from the Marxist handbook." From "Dr." somebody at Canada Free Press:

The Marxist-Leninist dogma said, “A small property generates capitalism day by day, minute by minute, spontaneous, and in mass proportions.” The small-time farmer feeding his family, with a little surplus, was seen as an individual member of the bourgeoisie, requiring squashing.

Can this happen in America? Can we lose our land and property to someone else deemed more deserving by constant leftist propaganda? Can we lose our land to wilderness because environmentalists in control force us to move? Or is it already happening peacefully and silently while the population is being soothed with “hope and change”, lies and fabrications on a daily basis?

Interesting that this person is up in Canada, being oppressed by trees and ruled by pioneer Stephen Harper and still feeling angry about what's happening down here with Obama.

We're getting word that someone else, a Ms. Sarah Palin, has something to say about this. On her Facebook page, the former ex-something equates stricter child labor laws on farms with the failure of America.

The Obama Administration is working on regulations that would prevent children from working on our own family farms. This is more overreach of the federal government with many negative consequences. And if you think the government’s new regs will stop at family farms, think again.

My family is a commercial fishing family, and commercial fishing in Alaska is much like the family farm (but the year 'round farmers no doubt work harder than we do!). I guarantee fishing families wouldn’t stand for this nonsensical intrusion into our lives and livelihoods, and, as a former 4-H member, I don’t believe farm families will either. Our kids learn to work and to help feed America on our nation’s farms, and out on the water.

Federal government: get your own house in order and stop interfering in ours.

Well, working on a farm is slightly better, though also very similar, to being a janitor in one's school. And how does school fit into this, again? This may be a concern of Obama's, but it's more likely that he just hates children. [The Gateway Pundit/Politico]