Obama Crosses Nerd Streams, Every Molecule Of Internet Explodes At Speed Of Light 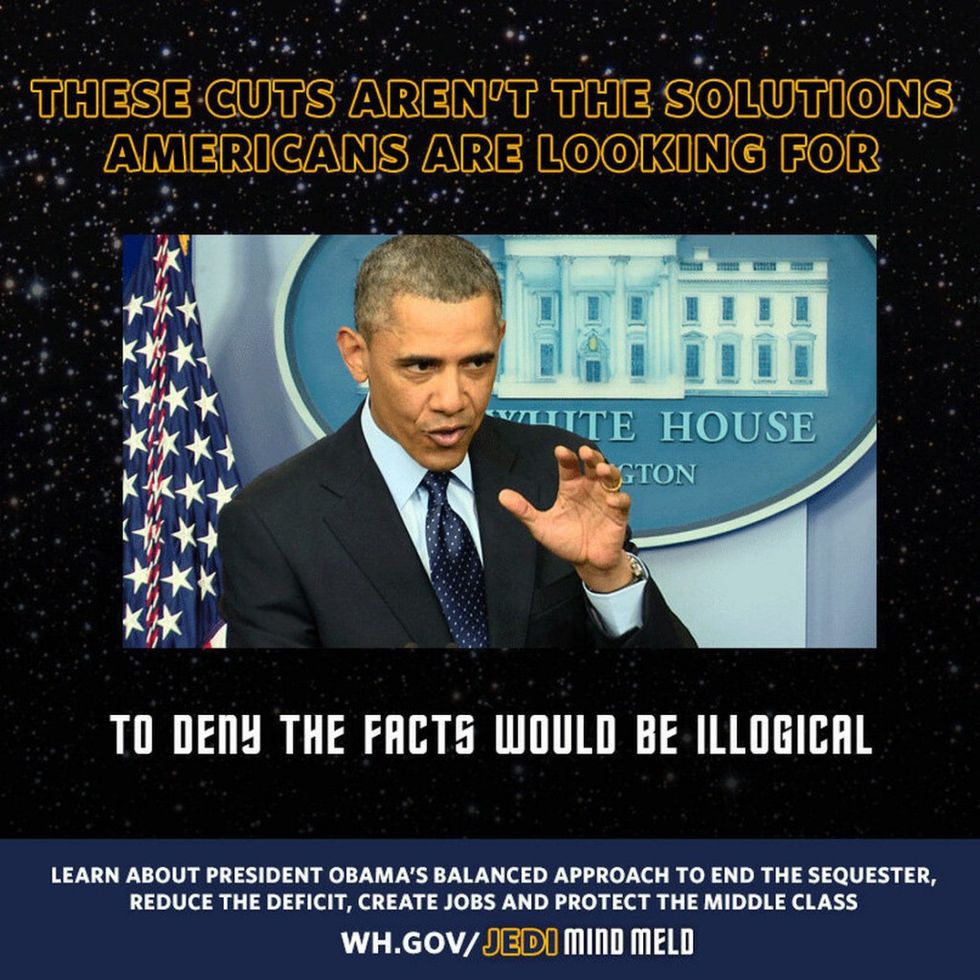 President Obama's reference to a "Jedi mind meld" at a press conference shook the geekosphere Friday, leading many to doubt his credentials as nerd in chief. Anguished tweets about the gaffe flooded the internet, as if millions of voices suddenly cried out in terror and refused to shut up. And Serious News Organizations carefully explained that in George Roddenberry's Star Wars movies, a "Jedi Mind trick" is a means of using The Force to impose a Jedi's will upon weak minds, whereas in Star Trek, a "mind meld" is a psychic joining of two consiousnesses, as practiced by the enigmatic Dr. Spock, who is a "Tribble."

Just for the sake of "context," in response to a queston about whether he had provided enough "leadership" in the sequestration fuck-tussle, Obama said,

"Even though most people agree that I'm being reasonable; that most people agree I'm presenting a fair deal; the fact they don't take it means I should somehow do a Jedi mind meld with these folks and convince them to do what's right."

The Atlantic Wire deserves special mention for adding to its coverage a reader's observation that, in the Star Wars "Extended Universe" of games, novels, and hastily-written furry fanfic, there actually is such a thing as a "Jedi meld" or "Force meld," although commenters quickly argued that it is not canon and is only wielded by Jedi to multiply their power, and cannot be used to influence House Republicans or other nonsentient beings. MSNBC sought the wisdom of Nerd God George Takei, who considered the fusion of terms a terrific idea:

“Jedis are the guardians of peace and justice. And mind meld is the Vulcan way of having the force of pure, clean communication between one mind and the another,” Takei said on “The Ed Show” on Friday. “Well, that’s what the president is trying to do–bring those two forces together.”

Takei also compared Republicans with Klingons, recurring villains in the Star Trek franchise, but predicted “the force of the mind meld and the force of Jedi power” will eventually produce the common ground that’ll be required for a resolution.

Another guy wrote a whole blog post combining nerdlore and communication theory to claim that Obama is both the Kwisatz Haderach and the second coming of Bruno Latour.

We also offer a big shout out to Reuters, which simply noted the comment as part of its coverage but did not do a sidebar on the Nerd Foofaraw. (Not that there is anything wrong with nerd foofaraws, without which we would be very bored indeed.)

Of the hundreds of tweets using the #ObamaSciFiQuotes hashtag, we liked this one:

And finally, the White House social media team decided that, rather than regretting the error, they might as well just play along:

Join Doktor Zoom at noon EST on Tuesday March 5 here on Wonkette for our Book Club livechat with Andy Carvin, author of Distant Witness: Social Media, the Arab Spring and a Journalism Revolution. You still have time to buy and read the e-book!