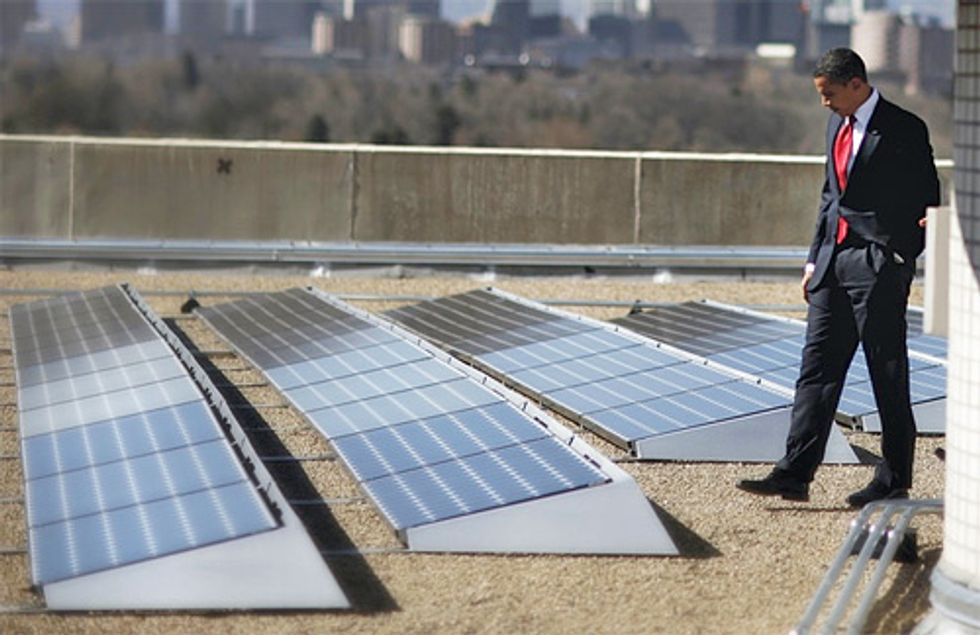 So we all know that President B. Barry Bamz hates St. Ronald Reagan, right? It is clear, established fact that everything Nobummer does is directly related to desecrating the memory of Reagan's lifetime of achievements. Remember when Obama was going to tear down Reagan’s childhood home using only his testicles as wrecking balls? Well apparently desecrating Reagan’s childhood home was not enough, and Obama has to go and try to wreck Reagan’s adulthood home, per WaPo:

The White House has completed installing solar panels on the First Family's residence, a process it started back in 2010.

Next thing you know, he will acknowledge the existence of AIDS or something!

If you are a millennial, you may be wondering how putting up solar panels is a dickslap in the face to Reagan. Here’s why:

President Obama, who will announce the project's completion as part of a broader push to expand solar energy deployment in the private and public sectors, took up the gauntlet nearly three decades after Ronald Reagan dismantled the panels Jimmy Carter had put on the roof.

That’s right. Back in the late '70s, hippie future-carpenter JC (the other JC) decided to take one small step to become very slightly more energy independent, what with the energy crisis and all. And Reagan said fuck that shit, take em down! Because what’s more in line with American self-reliance than relying on foreign countries for 40% of our oil?

In 2002, multiple solar grids were installed on the White House grounds. The installation was done quietly, with far less fanfare than Carter’s, but the panels provided energy to several White House operations. According to a New York Times article from 2003, “a grid of 167 solar panels on the roof of a maintenance shed has been delivering electricity to the White House grounds. Another solar installation has been helping to provide hot water. Yet another has been keeping the water warm in the presidential pool.”

And here we thought it was Dick Cheney’s unreliable bladder that kept the presidential pool warm. Also, who knew that Dubya hated Reagan just like us hippie liberals.

The White House will not say exactly how many solar panels there are, nor their exact location. Something something security nonsense. But they did say that they will provide, “6.3 kilowatts of solar generation.” We have no idea how much energy that is, so we tried to find out how many vibrators that would power. But that shit is hard to find out, so we found that the typical coffee maker used about 900 watts. And in case Hillary is there in 2016, the typical clothes iron uses about 1,000 watts, so we might need to up the number of solar panels if she is going spend all day ironing Bill's shirts.