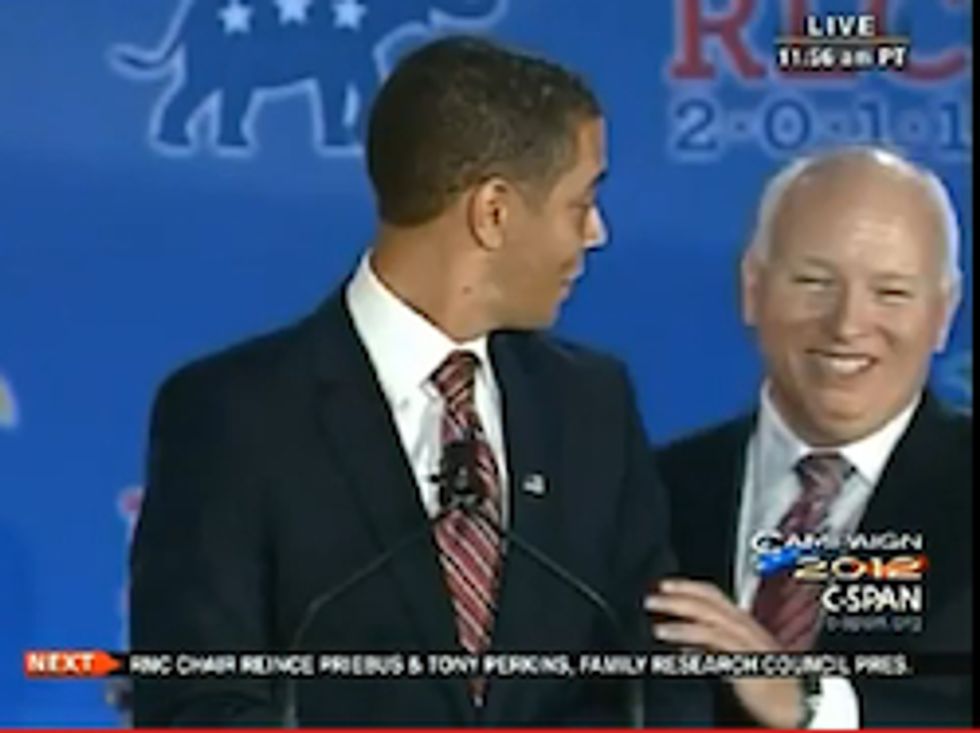 Inexplicably, the organizers of the Republican Leadership Conference in New Orleans asked an Obama impersonator to do a light comedy routine making fun of the president for a roomful of pasty napping olds. For some reason, the organizers thought it would be super funny to have a black impersonator show up onstage and make a bunch of miscegenation jokes to this white crowd. But that's not a laughing matter, having Africans take advantage of Our White Women!

So the crowd was very uncomfortable about this whole attempt at humor. And as this video proves, the old Saturday Night Live 1981-2011 "if it's not getting laughs, just make the sketch even longer" rule has not been lost on the GOP leadership. "Michelle celebrates all of Black History Month. I only celebrate half," was an actual joke this guy, Reggie Brown, used on his audience, and they laughed.

For some reason, multiplemediaoutlets decided to report that this performance was bad because it was full of jokes about Obama being black. Sure, this is true. None of it was terribly funny. But the audience was in stitches through every one of those jokes.

A comedian impersonating President Obama made racially tinged jokes Saturday at the Republican Leadership Conference before being pulled off the stage by an event organizer.

The Obama impersonator, Reggie Brown, said that while the First Lady celebrated all of Black History Month, the bi-racial president only celebrated half the month.

Brown also said: "My mother loved a black man, and she was not a Kardashian."

This makes it sound like the RLC organizers were offended that Brown made jokes about black people in hideously poor taste. But no, he actually got all the way through those "Obama is black" jokes -- including one about how they should rearrange the room according to pre-Civil Rights Act regulations, and everyone laughed -- before he used the joke that just tells itself, "Newt Gingrich's campaign is falling apart." AHAHA... see, we laughed at that one? This is when the audience finally turned on Reggie Brown. They booed him. DO NOT INSULT NEWT.

By the time he gets around to mocking Michele Bachmann, about nineteen minutes into this thing, the GOP is freaking out! They cut his microphone! And then some old white guy in a suit literally hauls the Obama impersonator off the stage! Incredible!

The real accomplishment here was to get a bunch of Republicans laughing, on camera, because they enjoy mocking the very existence of a black president. They do this anyway. But it's good to have more archival video? We were getting tired of those dumb watermelon-on-the-White-House lawn photos. [YouTube/Politico]