Obama Learns His Lesson From Election, Fires Only Republican In Room 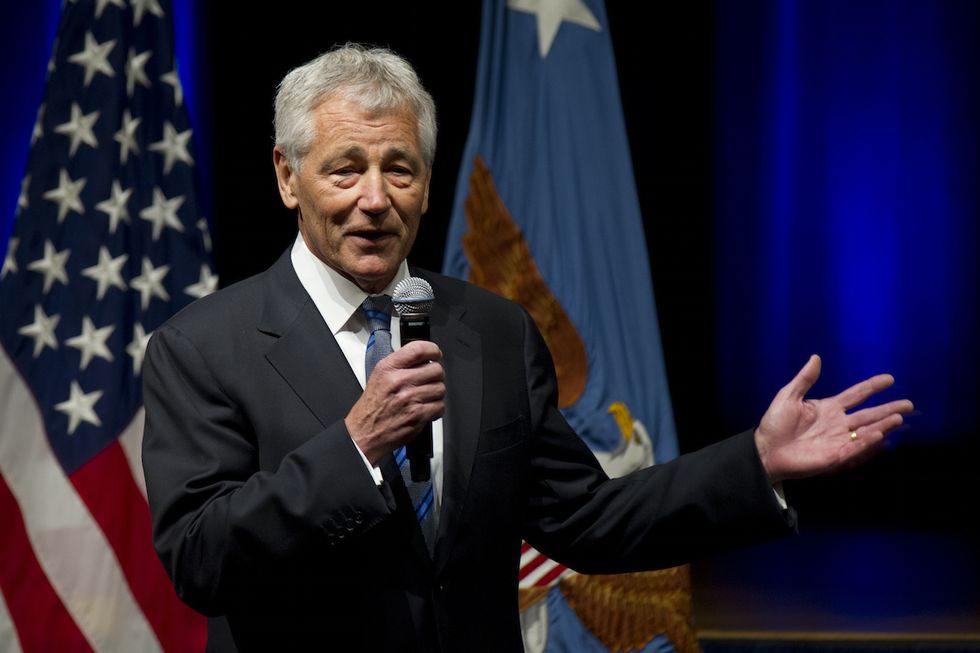 It seems President Obama has learned at least one valuable lesson from the devastating mandate delivered by the minority of the American people who bothered voting on Election Day: can the Republican.

The New York Timesis reporting that Secretary of Defense Chuck Hagel, the only Republican member of the president's cabinet, has been politely invited to decide to spend more time with his family, an announcement the president is expected to make on Monday. As is always the case when high-profile members of a presidential administration resign, we are never going to know the real real reason -- except for that time George W. Bush finally fired Donald Rumsfeld, finally, and absolutely no one in America had to ask why because DUH, that guy sucked rotten eggs, made a huge mess, was wrong about absolutely everything, and was also a real dick to boot.

But the Times has this nifty, unattributed theory:

His removal appears to be an effort by the White House to show that it is sensitive to critics who have pointed to stumbles in the government’s early response to several national security issues, including the Ebola crisis to the threat posed by the Islamic State militant group.

We are not going to dicker about whether the former Republican senator has been a good secretary of defense, but we are going to have a good side-splitting guffaw over the idea that Hagel should go because the administration has not sufficiently addressed the "national security issue" of that one guy having Ebola. But sure, why not, blame the completely appropriate handling of the non-epidemic in America on Hagel. Whatever works.

According to Senior Administration Official, that blabbermouth who's always talking out of school to the press, the White House already has a list of names to trial balloon as Hagel's replacement:

A Democratic president appointing a Democrat to the position would be a nice refreshing change, since Democratic presidents have a tendency to buy into the myth that only Republicans are qualified to lead the Defense Department and get us stuck in wars we can't never leave. And we sure would be get-your-popcorn amused to watch Republicans lose their ever-lovin' minds at the thought of appointing a woman to the post, since we've only barely just kind of started to accept the idea that ladies can serve in the military, maybe, so we're probably a good solid century away from believing that a lady can be man enough to run the Defense Department.

Not that Hagel was ever really man enough, according to the Republicans who were so disgusted by his appointment to the position in the first place, since Hagel, while technically a guy who actually fought -- as an enlisted man, no less -- in an American war, had no business being in charge of American wars because he had become so semi-sort-of squeamish about them. The person who heads the department formerly known as the Department of War really needs to have a more iron stomach than that and needs to be unafraid to do MORE WAR and kill ALL THE THINGS no matter what. For America!

Not that it matters much. President Lame Duck will be out of the White House soon enough, and, assuming he doesn't completely destroy America in the next two years, President Rand Romney Cruz Whoever can bring in some big tough-talking' guy who always managed to have other priorities when he could have served in wars he supported to bomb all the things. Bill Kristol for defense secretary, perhaps? Just so long as we no longer have that lefty liberal hippy-dippy extremist Chuck Hagel running around feminizing America and our sacred military by saying crazy things like, "Hey, our The Gay troops deserve some rights too."