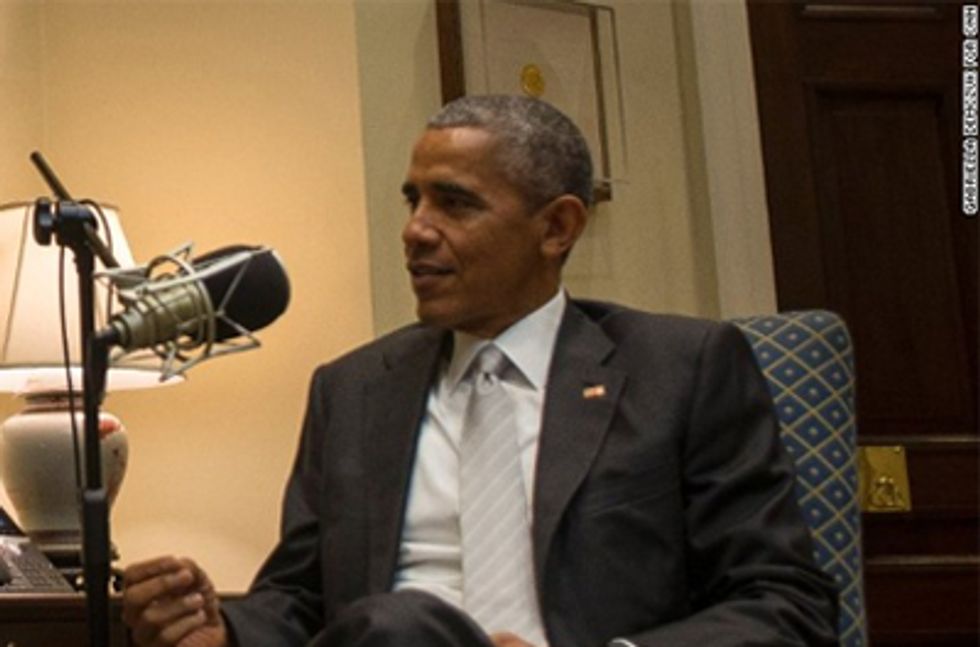 Photo by CNN, duh, so be nice about it, lawyers, we're promoting your podcast, OK?

Should you find yourself with 50 free minutes on this lovely Barbara Boxing Day, you owe it to yourself to listen to David Axelrod's "exit interview" with Barack Obama, because it's Barack-o-licious. All you have to do is get past the podcast title, "The Axe Files," which sounds like it's going to be 50 minutes on body spray, and no, David, nobody outside your immediate circle is ever going to call you "Axe," even if they say it when you're around just to be indulgent. Friends will do weird things if they really like you. But our point here is that you Wonkers should give this thing a listen, because it's so ridiculously obvious that these are two old friends who like each other a hell of a lot, and they're chatting about stuff that matters (as well as some stuff that's just fun).

Does CNN have the decency to provide an embeddable version of the podcast? They do not, because they are a bunch of mindless jerks who'll be first up against the wall come the revolution (with votes), but you can listen to it here, where there is also a transcript.

The CNN overview of the conversation gets at the meatier, newsy parts of the interview, particularly Obama's belief that if he'd had the Constitutional ability (and inclination, he says modestly) to run for a third term, he probably could have won it. Not that Hillary Clinton ran a bad campaign, he's careful to say; rather, he says, she had to fight against 30 years of a media double standard that always seemed a hell of a lot tougher on Clinton than on most other candidates. And yes, that's from the guy who in 2008 put his own foot in that stream when he said she was "likeable enough." But he doesn't think America as a whole has given up on Hope and Change. Directly quoting Sarah Palin's mocking "How's that Hopey-Changey thing workin' out for ya?, Obama says, well, actually, pretty darn well, not this time around, but for the long term, probably:

obviously in the wake of the election and Trump winning, a lot of people have -- have suggested that somehow, it really was a fantasy. What I would argue is, is that the culture actually did shift, that the majority does buy into the notion of a one America that is tolerant and diverse and open and -- and full of energy and dynamism.

And -- and the problem is, it doesn't always manifest itself in politics, right? You know, I am confident in this vision because I'm confident that if I -- if I had run again and articulated it, I think I could've mobilized a majority of the American people to rally behind it.

I know that in conversations that I've had with people around the country, even some people who disagreed with me, they would say the vision, the direction that you point towards is the right one.

Let's hope so! But this is also as good a time as any to point out there's no telling yet just how thoroughly the Trump Wrecking Crew will demolish every bit of that progress, and to say Barry may be entirely too optimistic about the promise of that vision surviving four (or Crom forbid, eight) years of bludgeoning by the crowd that just proclaimed Trump our new King (they meant Jesus, of course). We're fairly optimistic ourselves that Trump is never going to be another Reagan, because while Reagan was also an idiot, he was a sunny, optimistic idiot who people genuinely liked. Hard to say yet how much that'll matter, since the hardcore Republicans behind the curtain, the ones writing the legislation and implementing the policies, are similar -- but one hell of a lot meaner this time around, even if we thought the Reagan crowd was despicable. We're cautiously hopeful the national mood won't go their way -- we like our myths and our myth-makers optimistic, after all, and so far, Trump is no good at doing "sunny."

Still, says Obama, there's a lot of talent out there in the progressive wing of the Democratic party, and he's going to devote his post-presidency to nurturing it and pushing Democrats to take the country back following the model the conservative movement did in the post-1960s political landscape: focusing on local and state elections, building the national party from the ground up, and not simply shooting for the White House every four years. The point isn't that Democrats need to give up on "identity politics," it's that the party needs to communicate its message more effectively to the people who voted for Trump but are suddenly surprised they're going to lose their health insurance when Trump really does repeal the ACA:

See, I think the issue was less that Democrats have somehow abandoned the white working class, I think that's nonsense. Look, the Affordable Care Act benefits a huge number of Trump voters. There are a lot of folks in places like West Virginia or Kentucky who didn't vote for Hillary, didn't vote for me, but are being helped by this. [...]

[And] part of what we have to do to rebuild is to be there and -- and that means organizing, that means caring about state parties, it means caring about local races, state boards or school boards and city councils and state legislative races and not thinking that somehow, just a great set of progressive policies that we present to the New York Times editorial board will win the day.

Obama also said that -- after he's caught up on some sleep, at least -- he's determined to focus on that basic-level organizing and party building, to

build that next generation of leadership; organizers, journalists, politicians. I see them in America, I see them around the world, 20-year-olds, 30-year-olds who are just full of talent, full of idealism. And the question is how do we link them up? How do we give them the tools for them to bring about progressive change? And I want to use my presidential center as a mechanism for developing that next generation of talent.

He also wouldn't rule out the occasional return to a less behind-the-scenes role if the next administration tries to get away with something truly horrific -- he won't step into debates about tax bills, but if some issue arises that "goes to some foundational issues about our democracy," he'll definitely get involved to speak up about it. But not as a regular matter, because that's not what ex-presidents generally do, and because he worries too much Obama-to-the-rescue involvement with governing "would inhibit the development of those new voices. And I know they're out there; I've seen them."

Go listen to the whole thing -- there's your policy and political meat up there, but you'll want to hear the whole interview for the really sweet stuff between two old friends, like Barry admitting there's two things guaranteed to get him to tear up a little when he talks about them: his girls and the people who work for him, or Obama's admission he thought "Yes We Can" and the "O" logo -- both Axelrod's ideas -- were kind of cheesy, but Axelrod turned out to be right. (Axelrod: "I'm glad we straightened this out... I've gotten everything I wanted." Obama: "That's what I figured.") Obama's reflections on how his upbringing made him who he is, and got him to that 2004 Democratic Convention keynote address -- just four years after his pass to the 2000 convention didn't even get him access beyond the halls of the convention center -- are simply terrific to listen to, and will leave you missing him all the more. But then he reminds us he's going to get back to work, and will be the old guy at the bar, reliving his past glories -- even if, as Axelrod says, we'll all want to buy him a drink.

And while Obama does close by telling Axelrod, "Love you back, brother," he doesn't once call him "Axe."