Obama Saves Planned Parenthood From Trump's Grabby Hands! (At Least For A Minute!) 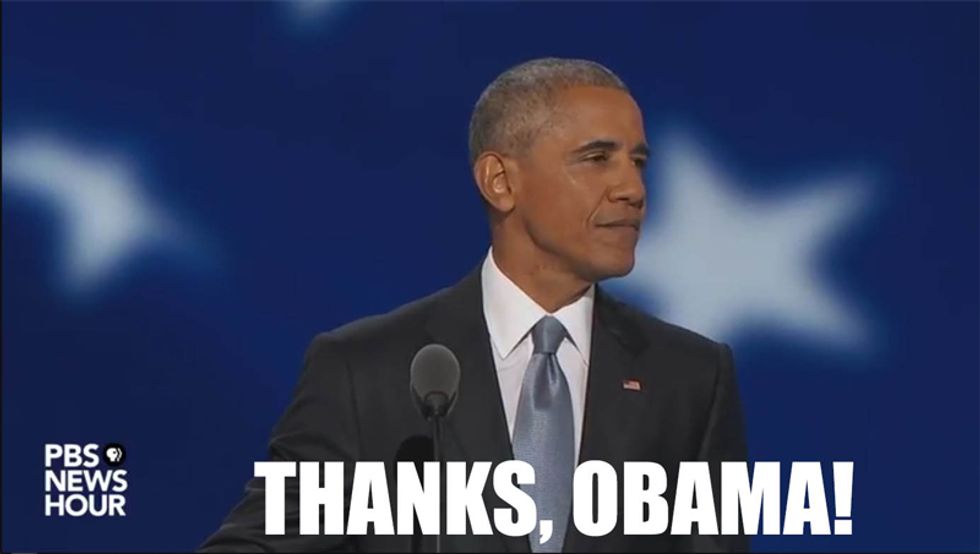 One of the very legitimate worries people are having, now that a shriveled minority of Americans have chosen Donald Trump as the next president, is what will happen to Planned Parenthood? Will it still be able to provide women's healthcare and STD screening and treatment? Will it still be able to sell baby parts out the back of a Winnebago in the Cracker Barrel parking lot? (HAHA, PLANNED PARENTHOOD DOES NOT DO THAT, CARLY FIORINA, YOU FOOL.) Will Paul Ryan's House Of Representatives immediately defund the organization?

[wonkbar]<a href="http://wonkette.com/600212/donald-trump-will-bomb-sht-out-of-ladies-who-have-abortions-murder-their-families"></a>[/wonkbar]Trump himself has been a bit hard to read on the issue. On the one hand, he loves some of the things Planned Parenthood does, but he also said somebody needs to get punished for getting all the abortions, and by that he meant ladies.

Well, your current president, Barry Bamz Barack, who will be president for just a little bit longer, is doing what he can to keep Planned Parenthood up and running, by issuing a new rule that says states cannot deny federal family planning moneys to the organization, simply because they feel like it. The LOL part is that the new rule takes effect on January 18, two whole days before Pussgrab McSpraytan takes office.

It requires that state and local governments distribute federal funds for services related to contraception, sexually transmitted infections, fertility, pregnancy care, and breast and cervical cancer screening to qualified health providers, regardless of whether they also perform abortions.

That's nice! Now, remember, to any idiot wingnuts who might be reading this: This is not money that will be used to buy abortions and abortion gift certificates and exclusive abortion swag. That is prohibited by a very stupid thing called the Hyde Amendment, which should be repealed. This is money for other things Planned Parenthood does! Yes, it does other things, and the nice New York Times just listed some of them for you! Like, for real, 97% of its activities don't even involve one abortion! WEIRD, RIGHT?

Now, can this be undone? Sure! But, according to the Times, the Department of Health and Human Services says it'll be a real pain in the ass:

According to the department, repealing the rule would require a new rulemaking process, or a joint resolution of disapproval by the House and Senate, with concurrence by the new president.

Advocates of reproductive rights acknowledged that prospect was a real one. “This fight is not over,” Cecile Richards, president of the Planned Parenthood Federation, said in a statement.

[wonkbar]<a href="http://wonkette.com/607245/mike-pence-compassionately-wants-to-nationalize-your-uterus"></a>[/wonkbar]And you can bet, with Vice President Mike "Vagina Hall Monitor" Pence in office, they will go ahead and try to do what they can do fuck this up as quickly as they can. UNLESS Trump doesn't really care, because half the stuff he said during the campaign on the issue was just "Two Corinthians"-style sucking up to evangelicals, and we learn it's MUCH MORE important to the new president that all the pussies be in tip-top shape for the grabbing, therefore Planned Parenthood may be allowed to live. We also have a sneaking suspicion the president-elect isn't the biggest fan of surprising unplanned pregnancies, so ... WE ARE JUST SAYING.

For now, we are just happy to report that Bamz The President has laid this flaming bag of turds (the good kind!) on the new administration's doorstep, and we pray to baby Jesus he's got many more "presents" in store to leave them, all the way up to the second Trump starts covering the White House with tacky gold-plating, like you know he's going to.