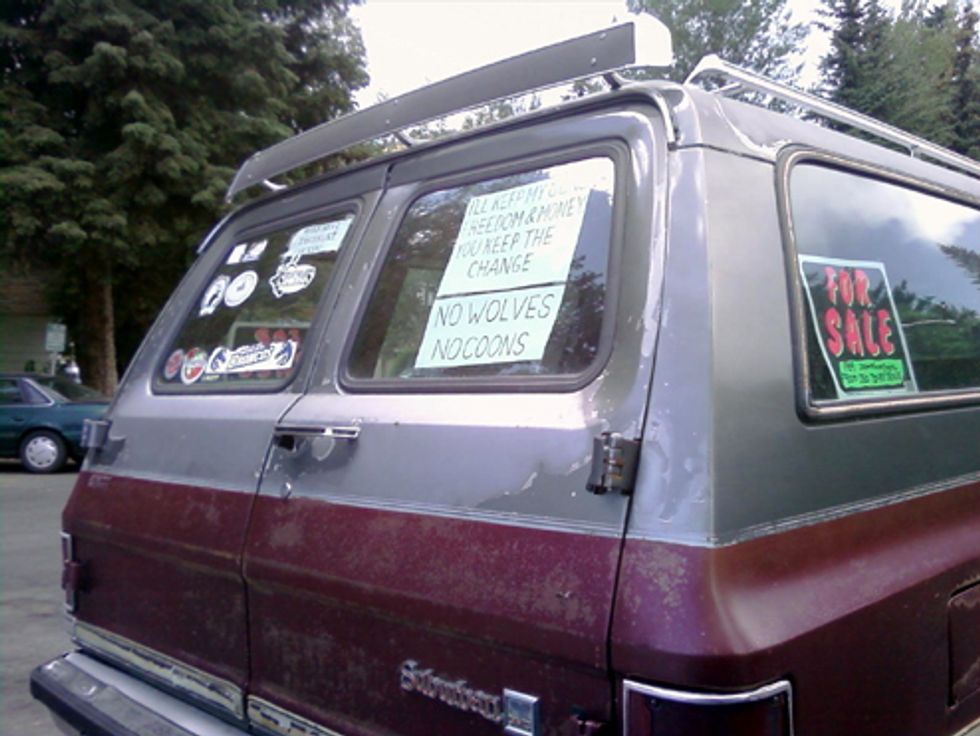 Direct from Ketchum, Idaho -- where Ernest Hemingway shot himself, because the people were such trash -- comes this shocking photograph of a dumb redneck's beat-to-hell 1984 Suburban. Wonkette operative "Sebastian S." apparently walked right up to this thing to take this picture, or maybe he just leaned out of his car and snapped the shot and sped away, weeping for America. But what do the custom Word document printout 'n scotch tape signs say, about America? Let's say "Enhance, enhance" to the teevee-apocalypse robot of the future (which is now) and get a closeup view.

Oh, proud patriot with your peeling window stickers and home-made racist signs, how much do you want for this two-tone (primer & rust) piece of crap so you can continue having so much money, which the "coon" is not going to take, because you are free? Nine-hundred dollars? That's a bit steep for such a PoS, but whatever, you're rich (in freedom)!

Extra bonus wingnut points for proudly standing up for shooting wolves. It's too bad wolves aren't a "threat" to anybody but welfare ranchers and the sheep they love in the night, because it would be funny if re-introduced wolves really did develop a taste for the slob offspring of the very rednecks who hunted wolves to near extinction. (The home-made sign in the driver-side back window says "Wolf meat tastes like chicken.")

(Ha ha, we are so accustomed to outright public racism from the teabagger trash these days that we're more offended by the shitty anti-wolf window signs ... and the paint job on this piece of American garbage.)