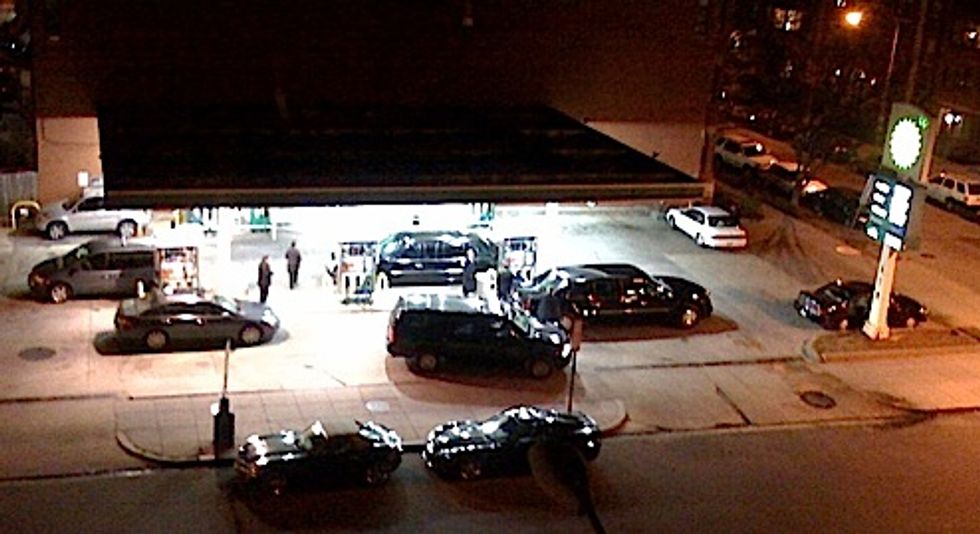 Hey isn't he supposed to be plugging the danged hole, America? Each year, at the beginning of shrimp season, Barack Obama blesses the fleet of oil-spill cleanup boats. Why isn't BP honoring this tradition today? Where are all the windmills! What is he even talking about? At least this isn't the "last crisis America will face."

We planned to do liveblogging on this historic night of Barack Obama's first televised speech from the Oval Office, but it went so quick! Still, we can live-blog whatever nonsense people say on the teevee in response, right?

8:19 PM -- Have you ever stood on a muddy swamp-beach in the summertime on the Gulf of Mexico and watched the beautiful ceremony of the Blessing of the Shrimp Boats? Well then how dare you call yourself an American, sir.

8:20 PM -- See this guy on CNN, the parish president of whatever crazy Cajun-French? That is really how everybody talks. It is an interesting American culture! Plus, terrible things always happen there.

8:21 PM -- Snake-creep James Carville agrees it was a special speech about oil spills, but maybe not that much.

8:25 PM -- Chris Matthews wants America's Youth to go clean up the oil and wonders if "the unions" won't let people do this, while Keith Olbermann says BP is blocking volunteers, so there are no pictures of the "goddamned" (!) dispersants making people get sick?

8:28 PM -- And Obama did cite World War II, and our Moon Battles there, and Howard Fineman says Obama is not enough of an FDR (the socialist), etc.

8:28 PM -- Who knows, man. Who knows. Maybe there is nothing to be done. And we should all just weep, silently, in the gas lines, listening to the AM radio, with Gerald Ford talking about inflation.

8:30 PM -- Bloomberg teevee is repeating the speech, for some reason? What, they don't have YouTube over there? Well maybe we'll see the five minutes we missed.

8:31 PM -- What was George W. Bush's first address from the Oval Office? The day after 9/11? What was Clinton's? Where is our research intern?

8:33 PM -- All the dang robots we've got doing things everywhere -- building cars, defusing bombs, vacuuming our floors, doing all kinds of surgery in people's hearts and butts -- and there's no robot that can do a little better? DARPA doesn't have some kind of Secret Submarine that can go 5,000 feet down?

8:35 PM -- That's really the horrible and mostly-unsaid thing here: We wouldn't be tapping the inky depths of Gulf of Mexico if we could easily get oil elsewhere. In a decade or so, will the Gulf Oil Spill be the thing people remember as the End of the Oil Era? And will it be remembered as a fairly smooth transition or as a Decade of Incredible Pain & Civil War? And what kind of futuristic clothing will the survivors be wearing, in 2020?

8:40 PM -- That picture? That's Obama's motorcade at a BP station in Washington, at 13th & N NW! (It's a picture from a year and a half ago, so why won't Obama denounce this picture of his Secret Service people filling up at a now-hated brand of gas station?)

8:43 PM -- Oh, a national mission! That sounds fun. So, jobs for people? A website, maybe a place to sign up? Where are these old factories with the jobs making windmills? Because, you know, a lot of people need jobs!

8:45 PM -- Al Gore & Lauri David had a sex affair for two years, according to The Star celebrity sex-affair tabloid.