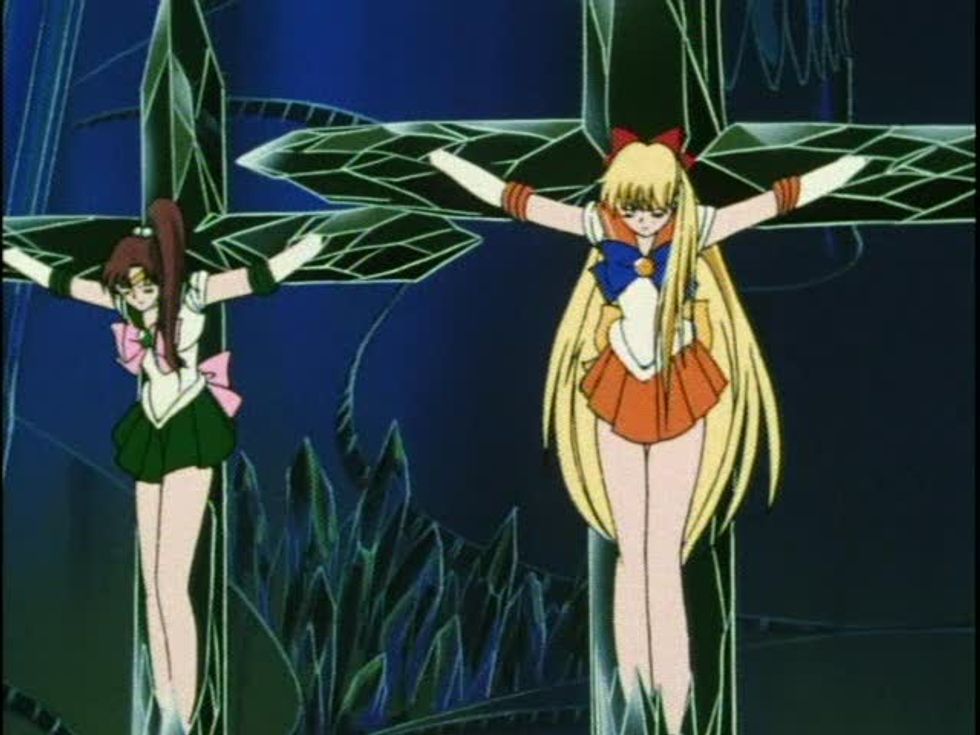 Sailor Moon died for your sins

Thank heavens, the latest attempt to oppress Christians in America has been thwarted. The CEO of Office Depot has apologized to a nice "pro-life" lady after an employee at one of its Chicago-area stores refused to print 500 copies of an anti-abortion prayer. A spokesperson for the chain had initially claimed that the flier, "A Prayer for the Conversion of Planned Parenthood," violated its policy against printing "material that advocates any form of racial or religious discrimination or the persecution of certain groups of people,” and also that it violated their policy against reprinting copyrighted material.

The prayer was written by Rev. Frank Pavone, the head (and possibly sole member) of the radical anti-abortion Catholic group "Priests for Life," which warned us a while back that America was on the verge of being consumed by a Three-headed Racist Pervert Sex Dragon Thing. Pavone has also begged Pope Francis to withhold communion from Joe Biden and Nancy Pelosi, because they are Fake Catholics for being pro-choice. In addition, Fr. Pavone is a regular contributor to Dead Breitbart's Sanctuary for Culture Wars Panic, which managed to squeeze at least three stories out of the prayer-copying incident. All because a business discriminated against a paying customer by refusing to provide services her, which is outrageous and should be illegal. Commenters even suggested Office Depot -- the whole company, apparently -- ought to be thrown in jail for refusing to do its job.

The foofaraw started when Maria Goldstein went to an Office Depot in Schaumburg, Illinois, and ordered 500 copies of the anti-abortion prayer to distribute at her Roman Catholic parish; an employee read the thing, with its calls to "Bring an end to the killing of children in the womb / And bring an end to the sale of their body parts" and to "Close the doors of the death camps in our midst," and declined to print the order, saying that it called for discrimination against Planned Parenthood employees and supporters. The employee said Ms. Goldstein was welcome to run it off on one of the self-serve machines, but Goldstein didn't want to do that, so she took the job to another printer. But she also complained to the Thomas More Society, a rightwing nonprofit legal firm specializing in anti-abortion cases, that Office Depot was doing Religious Discrimination against her, and besides, the prayer is for the conversion of Planned Parenthood's baby-killing employees and supporters, not violence against them.

The smart thing would have been to immediately say, "Yeah, our employee screwed up and misapplied a rule that's meant to allow us to deny service to people who want us to print a zillion copies of their Furry Snuff Porn newsletter or The Protocols of the Elders of Zion." Instead, an Office Depot attorney replied to the complaint from the Thomas More Society with a letter claiming that the prayer "falls within the definition of 'graphic material' and/or 'hate material,'" and that the refusal to print it was appropriate, and "not based in any part on the fact that the message here is couched in terms of Ms. Goldstein’s religious beliefs." The letter specified that the prayer's references to "the killing of children in the womb" and "the grisly trade in baby body parts" were what crossed the "graphic material" line.

Needless to say, this didn't sit well with Fr. Pavone, who called on "supporters of Priests for Life across the country" to swarm Office Depots and demand that they print copies of the prayer. He did not, however, issue a call for people to copy his group's cool Three-headed Racist Pervert Sex Dragon Thing, which is a darn shame, since it's stoled from a videogame graphic in the first place. That would have raised all kinds of Intellectual Property discussions in copy centers.

They do Photoshop good!

Before copy centers could get bogged down by angry people bringing in gory fetus photos along with the prayer, Office Depot CEO Roland Smith apologized, saying in a statement:

We sincerely apologize to Ms. Goldstein for her experience and our initial reaction was not at all related to her religious beliefs. We invite her to return to Office Depot if she still wishes to print the flier.

Office Depot spokeswoman Karen Denning added that after reviewing the flier, the company decided that it wasn't in violation of the company's policies after all. Yr Wonkette is inclined to think that she may have later muttered under her breath, "It's still pretty damned tacky, though."

Ms. Goldstein is awfully proud of her contribution to Keeping America Free (and racking up publicity for her anti-abortion crusade):

“Thanks to the help of the Thomas More Society, I was able to stand up for my rights as a Christian, and I hope other people are empowered to stand up for their religious freedom, as well,” said Goldstein. “I am grateful that God has used this situation to unite countless people in prayer for the conversion of Planned Parenthood.”

It sure was nice of God to do that, although you'd think that if this were all part of His plan to stop abortion forever, He'd have put that Omnipotence of His to more direct use than causing some doofuses at a copy center to make a boneheaded customer service decision so that rightwing media could have a hissy fit over it, thus calling attention to an overwrought screed on a rightwing website. Those Mysterious Ways just work out like that, we suppose.

Still, it gave us an excuse to call attention to the freaky Three-headed Racist Pervert Sex Dragon Thing once more, so we can always rejoice at the strange side effects of Divine Providence.