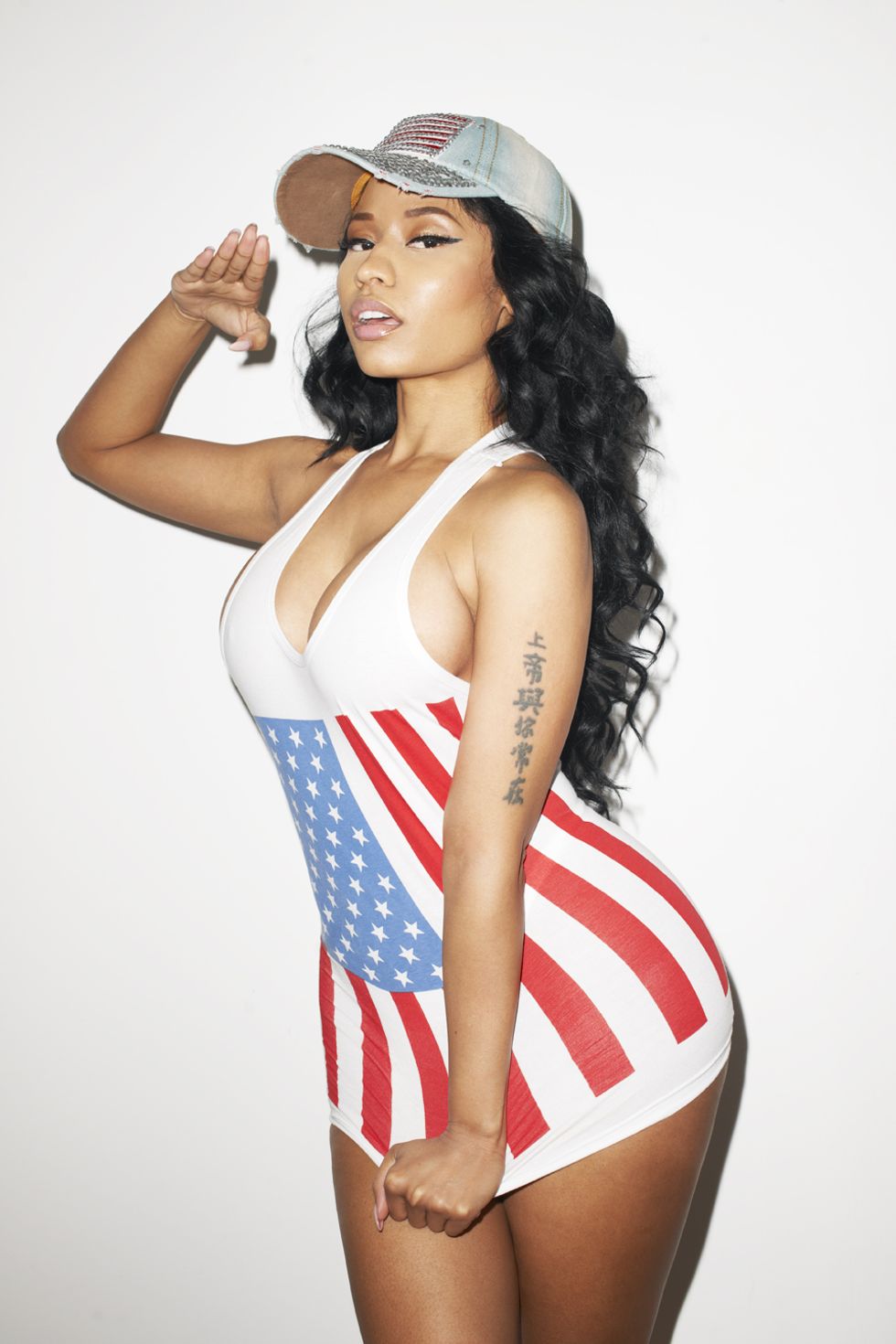 In the wake of her critically and commercially well-received third album, The Pinkprint, Nicki Minaj gave a wide-ranging interview to Rolling Stone. When the discussion turned to the killing of unarmed black people, Minaj gave an explanation as to why she thought more hip hop artists didn't speak out, citing Kanye West's infamous critique of George W. Bush during a Hurricane Katrina telethon:

“I feel like when Public Enemy were doing ‘Fight the Power,’ we as a culture had more power — now it feels hopeless,” Minaj said. “People say, ‘Why aren’t black celebrities speaking out more?’ But look what happened to Kanye when he spoke out. People told him to apologize to Bush!

“He was the unofficial spokesman for hip-hop, and he got torn apart,” she said. “And now you haven’t heard him speaking about these last couple things, and it’s sad. Because how many times can you be made to feel horrible for caring about your people before you say, ‘F--k it, it’s not worth it, let me live my life because I’m rich, and why should I give a f--k?’”

David Duke, longtime pop music fan, OG hip hop head, unofficial historian of the genre, and master of the 4 elements, had apparently been waiting for this moment to bless us with some #knowledge about The Pinkprint, Nicki Minaj, hip hop, the music industry, and, of course, "The Jews," as The Root reported:

At another point in the broadcast, he condemned the “absolute filth, drugs and violence” promoted by the hip-hop star Nicki Minaj. “Why do people blame blacks like Minaj?” he asked, rhetorically. “Because Minaj wouldn’t be a pimple on somebody’s rear end except for the fact that she is promoted by the Jewish record producers and the media, the mass media, the powerful media, that promotes absolute degenerates like her.”

Wow, thank you David Duke, for that extremely cogent and sensical analysis. Many members of the establishment media heard about David Duke's comments and assumed he was criticizing Nicki Minaj for speaking out against police killings. This is not true. How do we know it's not true? Well, because we visited David Duke's website, on which an employee of David Duke Dot Com objects to this characterization of his remarks, saying his criticism was solely about the content of Minaj's music (you can click this link with a clear conscience, it's to an archive.today capture of his website and won't give him traffic or anything):

In a bizarre new twist to recent events, a number of obscure news sites are stating that Dr. Duke’s recent well-publicized criticism of Nikki Minaj are not due to the obscenity of her work, but rather — get this — a response to her speaking out on the Eric Garner decision! (I guess these journalists weren’t listening when we voiced our sympathy for Eric Garner.)

The article goes on to discuss the many media sites which have scurrilously mischaracterized his quotes about Nicki Minaj. And you know what? He's right, his critique is grounded in a close reading of The Pinkprint. How do we know this? Well, we had David Duke over at official Wonkette HQ for our very popular "Bridge N Brews" night a couple weeks ago. At the end of the night, after David had taken an Uber back home, between the couch cushions, we found David Duke's accidentally abandoned notebook! (How did we know it was his? Well, the cover was a spangly pink & black Rebel battle flag, and on the inside cover he'd written "Official property of Triple D (Dr. David Duke), RETURN TO OWNER IF FOUND.") Anyway, we flipped through and found track-by-track notes he'd taken from his first listen of The Pinkprint, obviously in preparation for a Pitchfork review. Being responsible muckraking Wonks, we present his review verbatim, only correcting spelling.

Notes for David Duke's Review of Nicki Minaj's The Pinkprint

All Things Go - Very apt way to open the album. Interesting fact for your consideration: "All Things Go" has 11 characters in it, and it's the first track on the album. 1 + 11 = 12. Twelve, as many of you know, is two sixes added together, each six representing one of Nicki Minaj's albums. This is her third album, which makes it the third 6. I don't need to tell you what 666 means. It means "The Jews" in numerology (the good (white) numerology). I don't think I need to say any more.

I Lied - Of course she did. Negroes are lying and duplicitous, it's in their Negro nature that they can't help but lie. It makes it very difficult for them to communicate with people, since you can never tell whether they're lying or lying about lying. The only day I can make sense of what Negroes say is on Wednesday. Why? Wednesday is opposite day.

The Crying Game - You know what makes me sad? When "Minorities" and guilt-riddled race traitors suffering from the disease of self-hatred, call simple expressions of white self-love "racist hatred." Look at that girl and her Negro puppy. She's sad, and I am too. Why won't they let us love ourselves? Why?

Get On Your Knees - This song is about how The Jew and their allies The Black want good Christian good-hearted tax-paying white Americans all over the world to bow before their evil Jew agenda of hip hop and force-feeding everyone latkes. I hate latkes. I have always hated them, but now I am trying to reduce my starch intake and The Jew and Black won't let me. The Jews are trying to make me fat.

Only - I liked the video Nicki Minaj and The Jews originally made for this song, which reminded me of the good ol days of the Nazis. But then she apologized for the content of the video and said that she was not antisemitic, which was very disappointing but not surprising. Everyone knows about the cozy relationship between The Black and The Jew.

Four Door Aventador - "Aventador" is not an English word, so I skipped this track. If English was good enough for The White Baby Jesus Who Was Definitely White and Not Black,  Olive Skinned or Even Slightly Tanned, Being as He Is From Somewhere in Scandinavian, then it's good enough for me.

Buy A Heart - This song is about the massive, world-spanning, illegal organ trafficking conspiracy which is run by The Jews, along with Their Allies The Mexican. They kidnap white babies and either cut out their beautiful white hearts immediately and eat them (a delicacy among Minorities) or alternately raise the children until adulthood, brain-washing them anti-white propaganda and then send them as sleeper agents into unsuspecting white communities in order to bring them down from the inside with Political Correctness and White Guilt. Sad.

Trini Dem Girls - I don't think "Trini" or "Dem" is English. Another Skip.

Anaconda - An anaconda is a snake, and you know what else is a snake? You guessed it. I don't think I need to say any more. I watched the music video for this song and I got all warm and had to take a shower and then lie down in bed for several hours. I don't think I can listen to this album anymore, the video made me feel unusual.