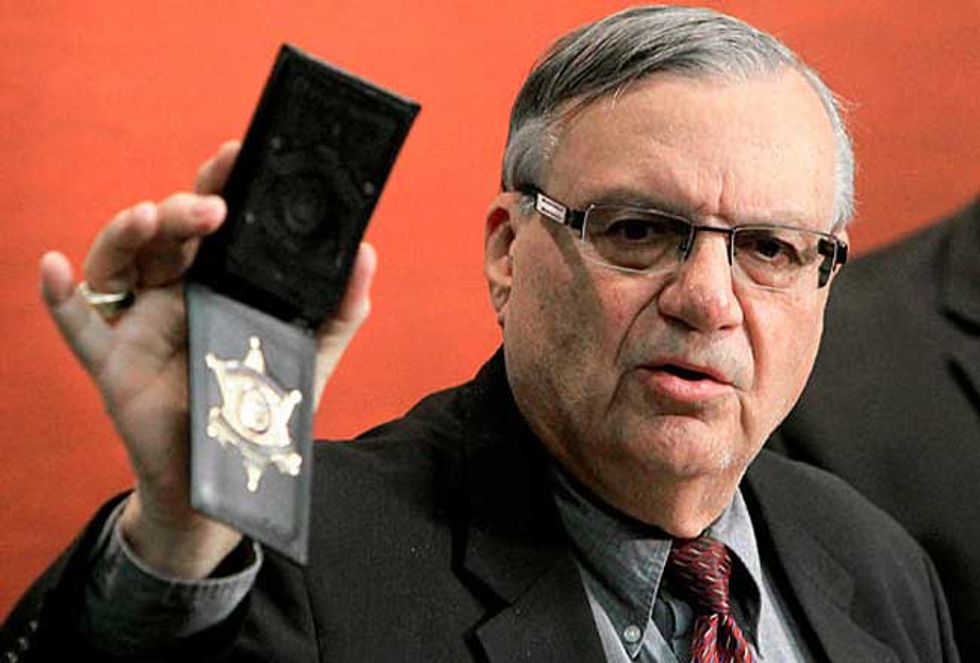 Loser pig turd racist Maricopa County Sheriff Joe Arpaio, who got his ass kicked in November's election and will not be sheriff much longer, and who also is still facing jail time in an ongoing criminal contempt case against him, knows what is still important, and that is proving that Obummer The Foreign faked his Foreign Obummer birth certificate. Priorities! Arpaio's birther crusade about the current Kenyan-Hawaiian-Islamogaywad president of America, Barack Obama, has been going on a long time. No, for real, a long damn time.

But now it is over and done with (haha unless he 'vestigates Bamz's REAL birth certificate IN JAIL, or just as a crackpot private citizen on the internet), because Arpaio held a press conference Thursday to reveal that his "Cold Case Posse" (branded lunchboxes and baseball caps available on Arpaio's Etsy page probably) has found THE SMOKING GUN that proves that the birth certificate is a fake, a fraud, a forgery, a ruse, a telegram from Make Believe Land, and by the way, Barry Bamz is a black man. GUILTY!

The presser came with a press release, because this is serious official government business. Excerpts:

Sheriff Arpaio says, “My concern was not where the president was born, but whether the document presented to the people was a fraud.”

But why would Obama do a fraud birth certificate if he wasn't hiding how he was born in Kenya, and also Indonesia, and also he was never born in the first place? SPLAIN THAT, SHERIFF.

The overwhelming forensic evidence shows the posted document is nothing more than a “created” document – pieced together using another source document. The original source document used in creating the fraudulent birth certificate is in fact an official Hawaiian Birth Certificate belonging to Johana Ah’nee [sic because these stupid motherfuckers spelled the woman's name wrong in their own press release]. Evidence shows there are 9 separate elements of forensic artifacts that were lifted and place directly on the Obama birth certificate in an apparent attempt to make it appear authentic.

The forensic evidence was verified by two different highly credentialed and nationally and internationally respected digital document experts who live on two different continents. Neither of these experts knew each other or the fact that both were being utilized to look into the documents, however they both arrived at the same forensic conclusions in this case. Not only were we unable to clear the document, but as you will see today the opposite is true.

Arpaio didn't stick THE REAL BIRTH CERTIFICATE of Johanna Ah'Nee under EITHER of the experts' doors, and they were not allowed to ever meet, or even swipe right on each other on Tinder. Nope!

Are you convinced yet, or do you need to watch Arpaio and his goons say it out loud at their press conference? Lucky for you, there is video of the presser! It's an hour long! It starts with a goon saying it's WAH MEAN UNFAIR that the press has always made fun of their very important investigation, because it was "never about where President Obama was born," even though it totally was, because these men are brainwashed racists who still believe Obama has come to take away their guns, freedom, and whiteness, even though, here they are, in the waning days of the Bamz White House, having guns and freedom and easily sunburnt white skin parts.

Arpaio then takes over and "proves" his "case":

Oh, you do not want to watch a smelly, sad, failed racist for one whole hour? You betcha. Here is a shorter news report, that shows THE SMOKING GUN part, haha just kidding no it doesn't. Arpaio says, "I believe you will be shocked by what you hear and see today." SPOILER, you will not be:

Toward the end of that news report, Arpaio says, presumably to President Obama (who is not listening because LOL), "Show us the microfiche, show us the birth certificate, and we'll all go home." Awwwww, Sweet Baby Joe, we hope you get to go "home" and don't get distracted by IN JAIL after your May 2017 contempt hearing, just kidding, we hope you go to jail, now screw off forever, GOODBYE.