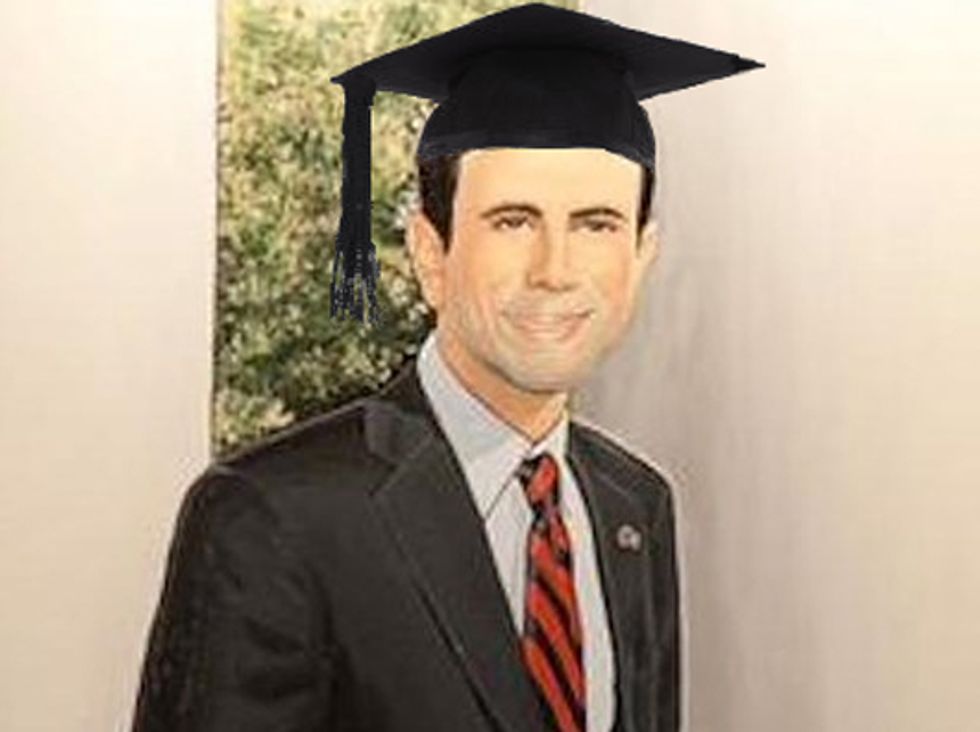 Louisiana, as you may have heard, isn't a state that's all that big on forcing education into people. Its public schools are being dismantled through aggressive "school choice" vouchers that use precious taxpayer dollars to fund religious schools, including some without libraries -- just as long as they don't include any weird religions that don't have Jesus in them. The state encourages teachers to bring in their own alternate instructional materials to help students think critically about the lies of science. And in the current legislative session, Louisiana is fixing to cut funding higher education by as much as 82 percent, which could lead to entire academic departments being eliminated. Louisiana State University is drafting the academic equivalent of a plan to file for bankruptcy, to have it ready, just in case. But there's no need to panic. Gov. Bobby Jindal has plans to rescue Louisiana education in at least one academic subject: He's publishing a history book in October.

Threshold Editions announced Tuesday that Jindal has a deal with the publisher for "American Will: The Forgotten Choices That Changed Our Republic."

In a statement issued through Threshold, Jindal called the book a work of history and "a call to arms" for the future as he reviews events ranging from the Louisiana Purchase to the Cold War.

Gosh, that sounds simply fascinating! For one thing, we're pretty impressed that Bobby Jindal considers the Louisiana Purchase and the Cold War parts of history that we've forgotten about. Or maybe it's the important lessons about those events that we've forgotten -- like maybe how the Louisiana Purchase put a huge burden on the taxpayers of 1803, and should have been handled by private industry, we guess. Or maybe it and the Cold War were the last examples of government spending Jindal approves of.

Threshold, we should note, is the division of Simon and Schuster that brings us other serious works of history like Rush Limbaugh's "Rush Revere" series of fake histories for kids.

Still, this Jindal tome sounds like an awfully important book, with many important lessons on history, particularly as history prepares us for the next presidential election, which Bobby Jindal will definitely win. The press release from Threshold promises the book will be stuffed with "dramatic tales that demonstrate the courage, faith, and vision that we need in 2016."

And after Bobby Jindal becomes president (stop snickering, you -- it could happen!), he'll do for American higher education what he's done for Louisiana, so you won't be needing any fancy-schmancy college books anymore.