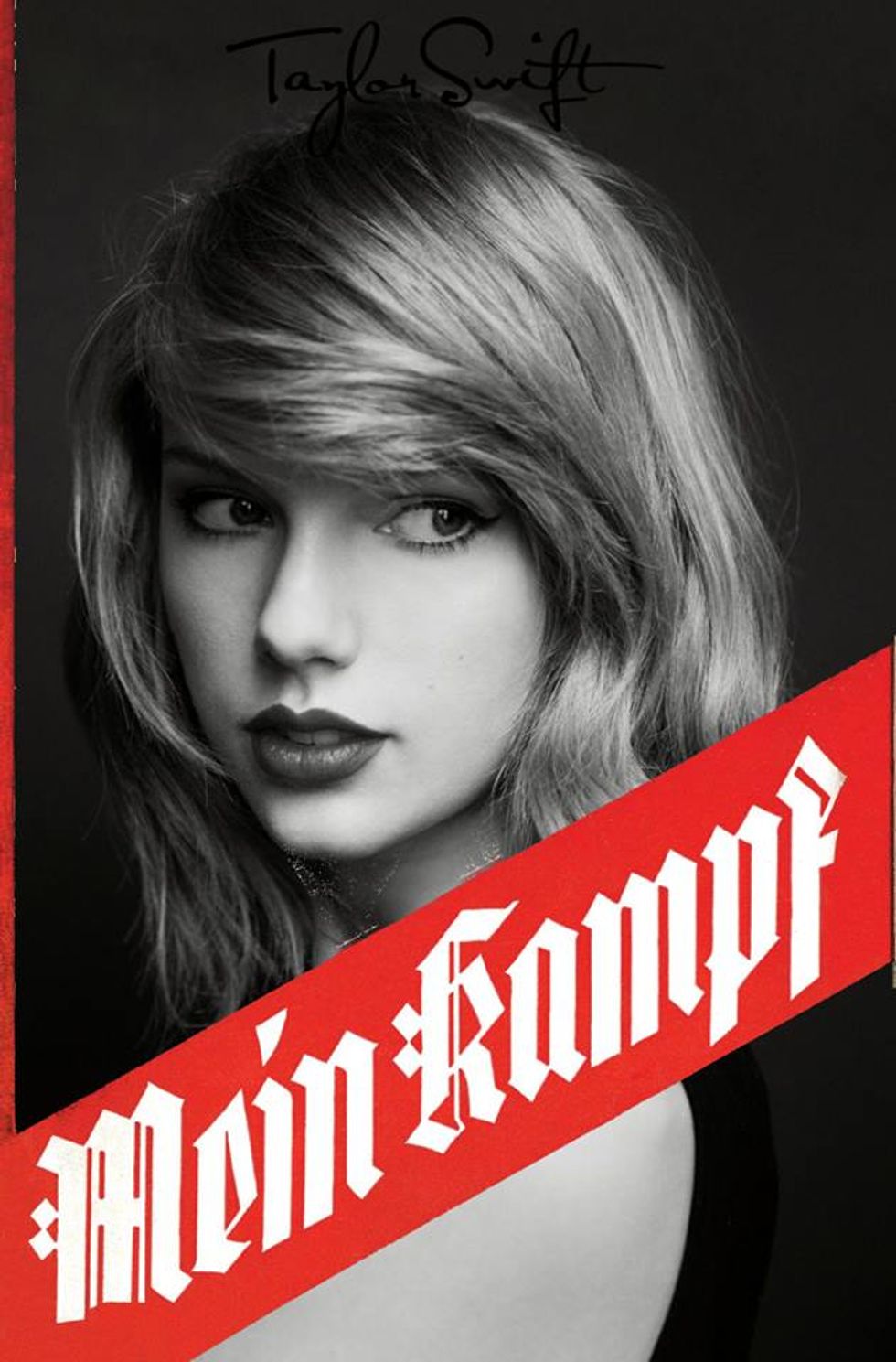 What is up with the Kids These Days who happen to be our biggest lady pop stars? We just found out Monday that the Illuminati is literally using Britney Spears to make devil horns at our daughters, to turn them into stripper slaves. Brit-Brit, how could you! And don't even get us started on how Beyoncé is under deep cover for the CIA, subliminally convincing black children to kill each other, and also cops, so that Obama and the ruling classes can ... WE DON'T EVEN KNOW WHAT THEIR END GOAL IS, that's how scary!

[wonkbar]<a href="http://wonkette.com/601059/drudge-sirens-beyonce-murdering-white-america-for-the-cia"></a>[/wonkbar]And now we learn that good girl Taylor Swift, who's been telling everybody to Shake It Off, has a secret too. She is an "Aryan goddess" who is secretly using her dark powers to start a race war, but on the opposing side from Beyoncé. Yes, according to some fun-loving neo-Nazis, Taylor has Bad Blood, and it is with non-Aryan people. Moreover, she does have a Blank Space, baby, and that's where she will write the name "Hitler." WHOA IF TRUE:

"Firstly, Taylor Swift is a pure Aryan goddess, like something out of classical Greek poetry. Athena reborn. That's the most important thing," explains Andre Anglin, the writer of the white supremacist blog the Daily Stormer. "It is also an established fact that Taylor Swift is secretly a Nazi and is simply waiting for the time when Donald Trump makes it safe for her to come out and announce her Aryan agenda to the world. Probably, she will be betrothed to Trump's son, and they will be crowned American royalty."

OBVIOUSLY. For one thing, Trump's son is kind of an Aryan goddess himself, except for how he's kind of creepy and inbred-looking, not that white supremacists have ever had a problem with that look before!

As wingnut homogay Breitbart jackhole Milo Yiannopoulos explains, a lot of this Taylor Is A Nazi shit started as #jokes, but for SOME of the meth-binging rage-monkeys on the "alt-right," it's TOTALLY for serious. Is it that they don't get the joke, and are thus convinced that Taylor Swift will one day reveal herself as their once and future queen, whom they will worship? Are they that stupid? Of course! Yiannopoulos writes:

[W]e find pictures of Swift with Hitler quotes superimposed upon them and attributed to her — and, bizarrely and perhaps even more amusingly, pictures of Hitler with Taylor Swift quotes.

There was once an entire Pinterest account called “Real Taylor Swift Quotes” dedicated to attributing Hitler quotes to Swift. [...]

[T]here is the 16,000-strong “Taylor Swift for Fascist Europe” Facebook group, previously banned by Facebook but up again.

Like the alt-right itself, the far-right internet’s love affair with this pop star is predominantly sincere but with a heady whiff of satire and troublemaking. That’s the alt-right for you: white nationalism, yes — but also frog memes, anime, and Taylor Swift.

Oh, they are such funny bunnies. And oh, those memes!

Yiannapoulos helpfully translates why wingnuts -- both the super-white supremacist kind, and also the garden variety racist kind that likes internet jokes -- like their Tay-Tay so much. Surprise, it is because she's not all gross and black:

Swift doesn’t look like other pop stars, who are either white people acting black or black people who seem to get whiter every year. She appears more comfortable in her own skin and doesn’t go in for racial ambiguity.

Beyond race, Swift is an icon of quintessentially American culture: she didn’t originally pursue pop music but got her start as a country star, a genre typically associated with white southern conservatives. Very problematic!

But not problematic for white folks who love Hitler, yeah? Let's go back to where we started, with that Daily Stormer white supremacist dude who knows it's a SECRET FACT that Taylor Swift is a Nazi. He has more thoughts:

"It's incredible really that she's surrounded by these filthy, perverted Jews [in Hollyweird], and yet she remains capable of exuding 1950s purity, femininity and innocence," Anglin says. "She is the anti-Miley. While Miley is out having gang-bangs with colored gentlemen, she is at home with her cat reading Jane Austen."

Know who ELSE eschewed gang-bangs with colored gentlemen in favor of pussy-petting time with Jane Austen?

So! Is Taylor Swift a secret Nazi? Nah. She is just a nice girl who breaks up with very many boys and makes records about it, unless she is actually a secret Nazi, in which case OMFG TAYLOR SWIFT, STOP IT.