Oh Hey There Is A New Democrat In The Senate, That's Nice! 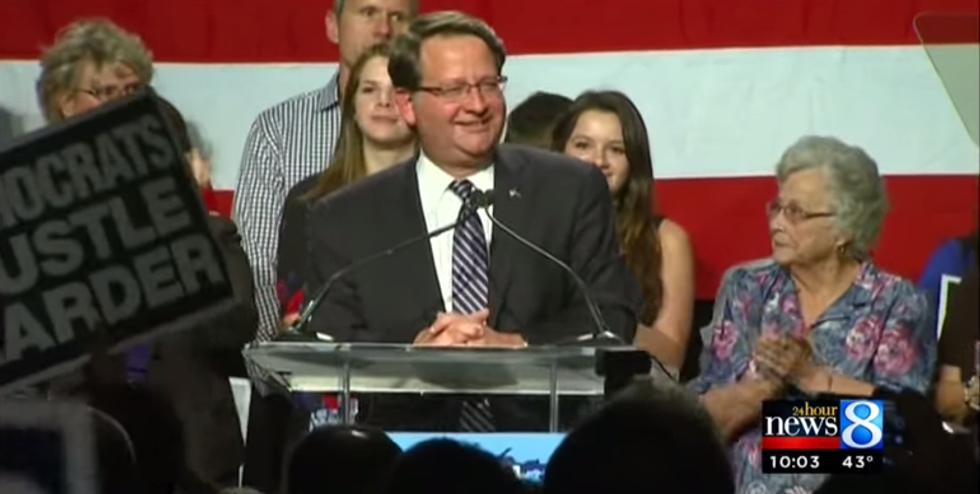 Rep. Gary Peters of Michigan (thank you, Michigan) was one of a very -- very, very, very -- select group of Democrats who did not have to drown all their sorrows after the Great Ass-Whoopin' of 2014 and instead got to give a victory speech on that fateful Tuesday night. He's the House member who beat Republican Terri Lynn Land (thank you again, Michigan). You remember Land, of course. She's the one who, in response to suggestions that she was actually part of her party's war on women, ran a HI-larious ad in which she said "REALLY?" and then sipped her coffee and literally had no more words to say. Turns out that ad didn't help her. And apparently, having Jeb Bush on the campaign trail didn't help her either.

So Gary Peters will be sitting alone at the Blue Team Newbie Winners table in the Senate cafeteria, on account of how he is the only one who stepped up and said, "Hey, I'll try this running for Senate thing," and did not have to regret his decision later.

According to the Washington Post, the senator-elect is ready to suck it up and make nice with Republicans so maybe he can sit at their table:

Coming from the House, Peters (D-Mich.) is also used to working alongside Republicans. “I’ve been working in the Republican-controlled House for the past few years, so I know how to build relationships with members of the other party and find bipartisan common ground,” he said in an e-mail.

While we are already quite sick and quite tired and quite sick and tired of being sick and tired listening to all this cut-and-run defeatocrat talk about how now it's time to work with the party whose motto since, oh, around January 2009 has been "Fuck you and everything you do," we can understand why Peters might prefer not to be Democratic Senator, Party Of One.

However, we would like to take this moment to remind him that it was not so long ago that an aide to Senate Majority Leader (for now) Harry Reid said the lesson for Democrats might just maybe be that Democrats should try running on Democratic principles and accomplishments, because that could work, since that whole pretending not to be Democrats things sure as heck didn't work.

So go ahead and make yourself some bipartisan friends if you must, One New Democratic Senator. Just remember not to get too cozy with your new pals from across the aisle. If Democrats actually try out this crazy new plan to be Democrats for a change, we should be sending you some more like-minded friends in the near future.