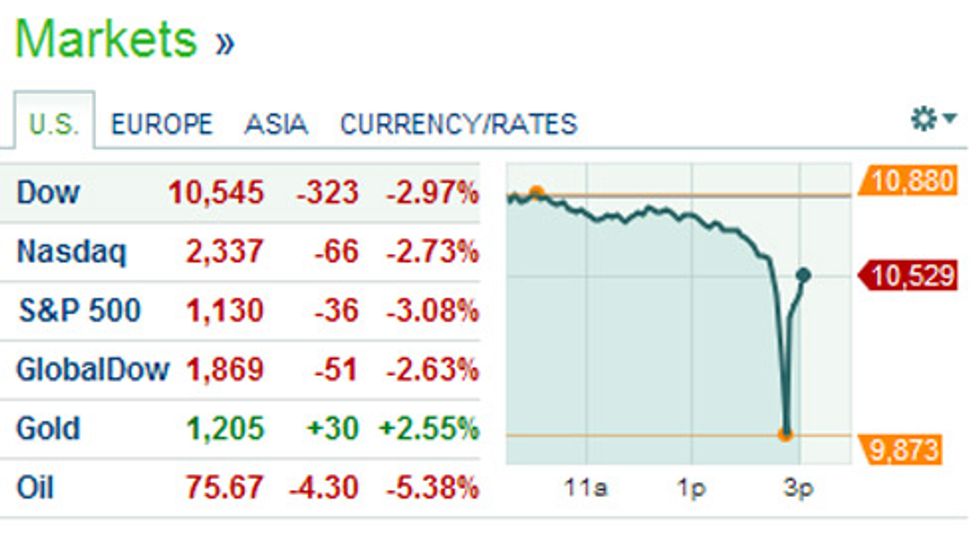 The Dow Jones plunged 8.8% at some point this afternoon, and was then down about 7%, and now it's "only" down about 3.2% -- that's for the day, and not including the losses earlier this week -- and it's all because of Greece and the live video on the teevee of the Greek Darth Vader Cops and the protesters throwing shit and the burning banks full of corpses and this one crazy yellow dog pacing the invisible Maginot Line, barking at the cops, wagging its tail, etc. Craziness. Dow's down 349 points at this moment. Let's watch the video of the European Union crumbling before our eyes.

The DJIA plunges 1,000 points, then shoots up 500 points, what the hell. S&P down nearly 3%, bonds down, Euro shortly to be worth about five American cents, etc. Traders are making crazy money on these huge swings -- while, conversely, other traders (and, probably, you, whether you're paying attention or not) lose like crazy. Is it all "black box trading" or Sinister Robots or program-trading or a giant Cancel Button?

And the S&P has officially erased its entire 2010 gain, bye moneys!