Oh Look, Another Republican Suddenly Supports Disaster Aid For His Own State 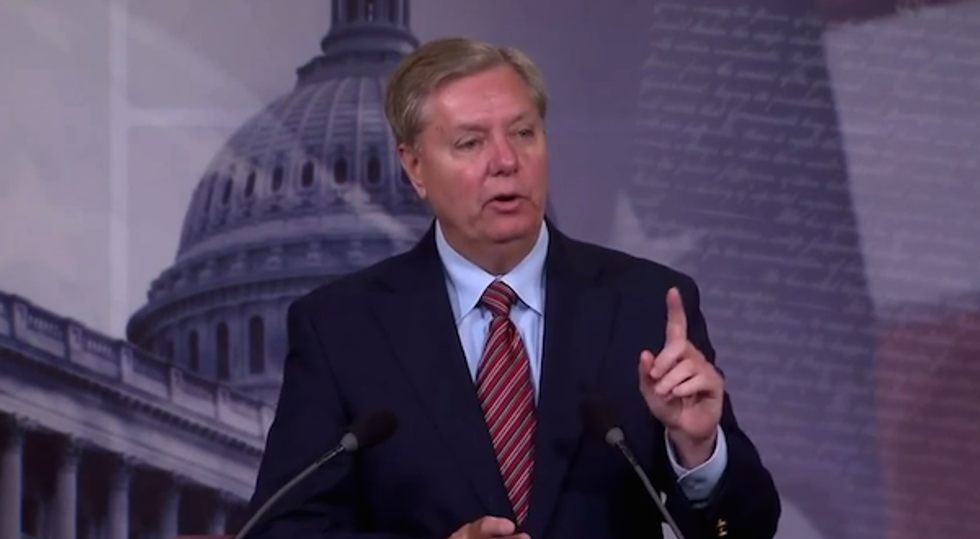 You really gotta appreciate the fiscal conservatism of the Republican Party. Always looking out for the overburdened taxpayer, never wanting to waste a dime on anything as frivolous as healthcare or food for people living in poverty or a little extra help for grandma or, god forbid, any aid whatsoever to a region destroyed by a major natural disaster. It's called bootstraps, people, and if your house got carried away in a flood and all your roads wiped out, well, too bad for you and all, but let's not go wasting Americans' money on silly luxuries like putting a temporary roof over your head.

Unless, of course, those natural disasters target your state, where people whose votes you're counting on for re-election happen to live, in which case, that's a different story entirely:

"Let's just get through this thing, and whatever it costs, it costs," [South Carolina Sen. Lindsey] Graham told CNN's Wolf Blitzer on "The Situation Room" on Monday of the devastating floods in his home state. [...]

It would seem, however, that Graham does not consider residents in northeastern states his friends or neighbors. He was one of many Republicans who opposed disaster relief funding in 2013, after the devastating Superstorm Sandy that displaced tens of thousands of people from their homes, caused billions of dollars of damage across the eastern seaboard, and took the lives of 72 Americans. (That's like 18 Benghazis, for those of you who are bad at math.)

But as the senator and presidential candidate, who described himself as a "pretty kind-hearted fellow," explained on Monday, that was different and Graham had a real good reason for opposing that unnecessary spending:

"I don't really remember me voting that way," Graham said.

Pressed further, he said: "Anyway, I don't really recall that, but I'd be glad to look and tell you why I did vote no, if I did."

Graham might not remember it that way, but that's how it happened. Graham was one of three dozen Republican senators who opposed disaster relief funding after Sandy, including Graham's fellow Republican presidential candidate Texas Sen. Ted Cruz, who earlier this year demanded the federal government fulfill "its statutory obligations to provide the relief to help the Texans who are hurting," after parts of his home state were devastated by flooding over Memorial Day weekend.

But again, that was different, and sending federal aid for a state that don't need no stinkin' federal dollars limiting its freedom for things dumb things like healthcare is just the right thing to do. Unlike that emergency funding for the Sandy victims, which was nothing more than, as Cruz put it, "exploiting victims of natural disasters to fund pork projects that further expand our debt."

Graham, unfortunately, can't even remember why he didn't give a flooded fuck about the victims of Sandy, but it must have been something real good, like how if Graham were ever to run for president, he probably wouldn't get a single vote in New Jersey or New York, so fuck 'em.

Oh, golly, is that too cynical of us? No, actually, it's just right. Because Graham is a typical Republican, and like all the other Republicans -- including more than 30 senators who opposed disaster relief after Sandy but have crawled to Uncle Sam with their hands out when their own states have been struck by natural disasters -- he doesn't think Big Government has any business helping American in need, unless those Americans happen to be his constituents.

Just like congressional Republicans who complain they can hardly make ends meet on their six-figure salary and then vote against aid for people living in poverty because hey, if they can afford a refrigerator in their apartment, they're doing just fine.

Just like "pro-life" Republicans who want to ban abortions, but they sure are glad that procedure is still legal when they want their wives and mistresses to have one.

Just like "family values" Republicans who think gay sex undermines the sanctity of marriage, while they're secretly seeking some strange on Ashley Madison.

Just like every other rancid fuckworm Republican who believes they are God's special unique snowflakes, and the rules they expect reg'lar kitchen-table-sitting Americans to follow simply do not apply to them. That's today's Republican Party for you: fuck you, America. God bless.