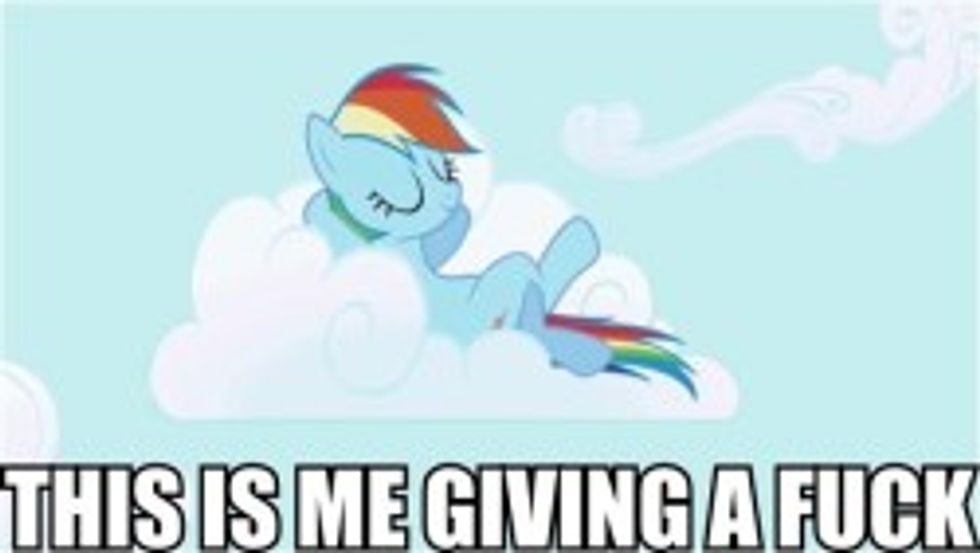 Ugh. We thought we were done with this IRSgate bullshit, since now Rep. Darrell Issa (R-Satan’s Bunghole) has been outed asCongress’s biggest assclown, whom no one should take seriously ever again. (Haha, "ever again" assumes facts not in evidence. Law talk!) But it seems that the non-scandal is turning out to be a scandal again, except it’s because Darrell Issa seemed to manufacture the first non-scandal, because he is a shitty human being and all. This has become a giant confusing clusterfuck of awfulness, and we are getting really tired of more awful people getting involved and ruining our day-drinking. Here’s the latest.

Democrats are upset because contrary to the report prepared by the IRS Inspector General, the IRS didn’t just target Tea Party nutjobs, but also looked at progressive groups. When asked about it, IRS IG J. George Russell’s office explained that they only looked at Tea Party groups because that’s all Rep. Issa asked them to look at. THE FUCK, REALLY?

Ahhh, so Rep. Issa asked for a very narrow report only focusing on Tea Party groups, eh? It’s almost like he and J. Russell George were in cahoots to plan and plant a scandal. Previously, Yr Wonkette wondered about a crazy conspiracy, but that was mostly a joke. Now, we are not so sure… Were there nefarious shenanigans going on here?

Of course, Democrats were justifiably wondering what the hell was going on. Because this seems like the most incompetent conspiracy ever, being spearheaded by two bumbling, walking piles of fail. Pro-tip for George: don’t publicly announce that you are conspiring with the Chairman of the Oversight Committee.

Of course, there had to be backtracking. George sent a letter to the Democrats trying to weasel his way out of writing a scathing report that contained only partial truths that seemed very politically motivated and in no way meant to give a clear picture of what actually happened. With Darrell Issa’s hand clearly up his ass and directing him in what to say, George responded that his report did not, in fact, limit itself to allegations related to the Tea Party. Seriously, just ignore what the spokesperson said the other day, go along, nothing to see here. Greg Sargent of WaPo provides this summary:

His letter — a response to questions about why he didn’t mention progressive groups in the audit – claims that six applications within the period in question had the words “progress” or “progressive” in their names out of 298 political cases identified by the IG as having been scrutinized by the IRS. It also said that while 30 percent of the groups with “progress” or “progressive” in the names were “processed as potential political cases,” the audit found that 100 percent of names with “Tea Party, Patriots, or 9/12 in their names” were processed as political.

But if George returns to the Hill, Dems will likely point out that his latest letter does, in fact, acknowledge that progressive groups were designated on the BOLO [Be On the Look Out] memos, and ask him why that was not mentioned in the initial audit. They will also ask him why, when previously asked at a hearing whether some of the groups were progressive, he claimed that “we were unable to make that determination.”

Clearly, the Democrats want George to come back to testify, because it makes Congresscritters angry when you only tell part of what you know, especially if you are involved in a giant story that costs people their jobs because you wrote a report that doesn’t seem all that truthful, seemingly at the direction of an uber-partisan shitbag.

Oh, and while all this shitfuffle is going on, Rep. Issa continues to fall over backwards over more and more lies. In an interview with CNN (per WaPo):

“I’ve never said it came out of the office of the President or his campaign. What I’ve said is, it comes out of Washington.”

Unfortunately for Rep. Issa, the rest of the world can go back and look at previous interviews where you said things like:

“This was the targeting of the president’s political enemies effectively and lies about it [sic] during the election year, so that it wasn’t discovered until afterwards.”

And it really sucks for Rep. Issa, because Legislative Badass Elijah Cummings keeps calling him out for being a sorry sack of awfulness, like in our still-favorite letter of almost all time.

Can’t we all just agree that Darrell Issa is vastly incompetent and go ahead and put him in the same category as Sarah Palin, Donald Trump, and other GOP hacks who say inconsequential things with their faceholes? Let’s all just point and laugh at him, then continue our day-drinking, cause everyone has got to be tired of him by now.