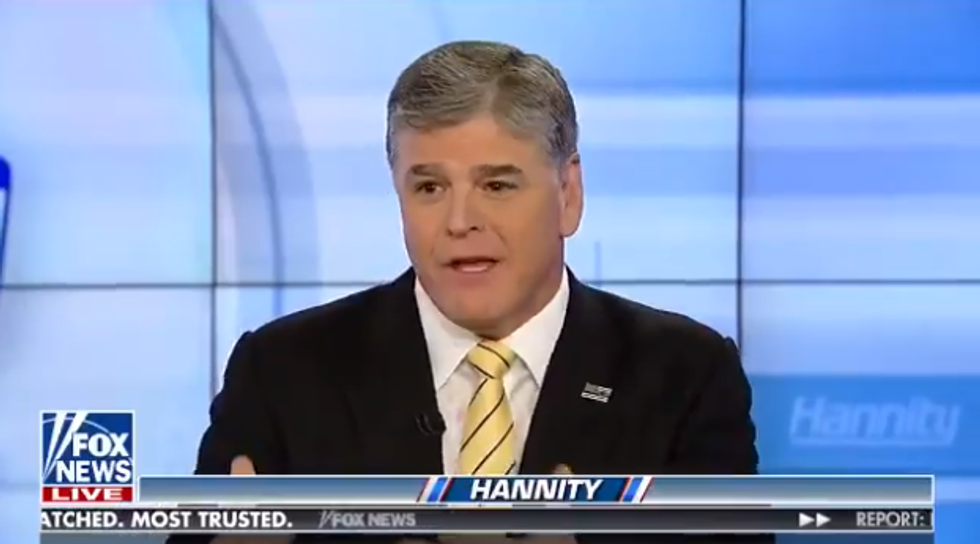 Fox News viewers got their monthly dose of reality on Tuesday, and we're a-guessin' Sean Hannity hated it. Truth was breaking out all over!

First of all, there was that thing that happens every so often, where Shep Smith CANNOT TAKE THIS SHIT FOR EVEN FIVE MORE SECONDS, so he decides to debunk literally everything Fox News has been talking about 24/7 in two minutes or less.

Holy shit, Shep is on a roll today.

"Trump claimed Feds spied on his campaign ... calls it Spygate. Fox News can confirm it is not. Fox News knows of no evidence to support the president's claim" pic.twitter.com/nMk7uNhuZU

President Trump accusing the special counsel and his team of a whole NEW set of conspiracy theories! Unfounded. Not based in fact or reason. With no evidence to support them ...

My goodness, Shep! All this truth happening on a screen emblazoned with the Fox News logo, we don't even know what to do right now!

The president says that Robert Mueller and his team are meddling in the midterms. There's no evidence to support that.

Trump did say that! And it's being debunked! On Fox News! By Shep!

Shep Smith went on to say Trump is a liar when he says Robert Mueller's team is full of Hillary-loving Democrats, noting that both Mueller and Deputy Attorney General Rod Rosenstein (A TRUMP APPOINTEE) are Republicans. Smith says Trump is wrong when he calls the Mueller investigation a "RUSSIA WITCH HUNT," considering how Mueller is charging folks with crime all over the damn place, and that we have three guilty pleas -- to say nothing of all the evidence Mueller has against those people that he's NOT charging, in exchange for cooperation -- and that they all involved lying to the FBI about things involving RUSSIA.

And then! What about SPYGATE, Donald Trump's new conspiracy theory about the Deep State embedding spies in his campaign for NO REASON, which totally didn't happen? Shep noted:

President Trump has claimed the Feds spied on his campaign with an informant. The president calls it Spygate. Fox News can confirm it is not. Fox News knows of no evidence to support the president's claim.

But we are guessing Hannity hated other parts of Fox News on Tuesday too. Retiring Rep. Trey Gowdy went to those super secret sexxxxy Devin Nunes briefings last week, the ones where Nunes and Trump were pretty sure the FBI would show them documents that prove the Trump-Russia investigation is an ILLEGAL #SPYGATE WITCH HUNT!!!!!!!!!111!!

But alas, they did not show that! Gowdy explained to Martha MacCallum on Fox News, in words small enough for the president to understand, that while Trump is obviously very upset right now, and Gowdy understands why he is upset, the FBI acted properly in starting the investigation:

It was President Trump himself who said "Number one, I didn't collude with Russia, but if anyone connected with my campaign did, I want the FBI to find that out." It looks like the FBI was doin' what Trump said I want you to do. Find it out.

Trump did say that! Way to remind him, Trey Gowdy!

Gowdy added some comforting words about how Trump is supposedly not the target of the investigation, then said last week's briefing convinced him even more that the FBI has been doing exactly what the FBI is supposed to be doing:

I am even more convinced that the FBI did exactly what my fellow citizens would want them to do, when they got the information they got, and that it has nothing to do with Donald Trump.

LOL. That's right, Gowdy, scratch the president behind his ears. He LOVES that.

Finally, there was one other Fox News segment last night that we bet Sean Hannity (and Trump!) just haaaaaaated. It was Judge Napolitano! That gross wingnut with the bad hair! He told Martha MacCallum that #Spygate is some serious-ass horseshit and Rudy Giuliani is talking out his ass, and that before Napolitano went making crazy statements about the FBI doing something "nefarious," he'd have to see some ACTUAL EVIDENCE. Like, does Fox News even know what actual evidence is?

Feel free to hit this link and watch that if you want!

Or just watch this video of Trump idiot Sam Clovis -- this guy, who has been cooperating with the Mueller investigation -- on the Hannity program, and Hannity is trying so hard to get Clovis to say the FBI did SPYGATE INFORMANT BENGHAZI, but he just won't say it. Oh sure, he tickles Hannity's LOL parts by trying to act like normal FBI investigative procedure is somehow a scandal, but his heart isn't in it. Sad!

Then Hannity doesn’t get the answer he wants with Clovis. Lol pic.twitter.com/xZTsHCikPA

This has been a post about Fox News telling the truth about stuff. Trust us, there won't be another post like it anytime in the foreseeable future.