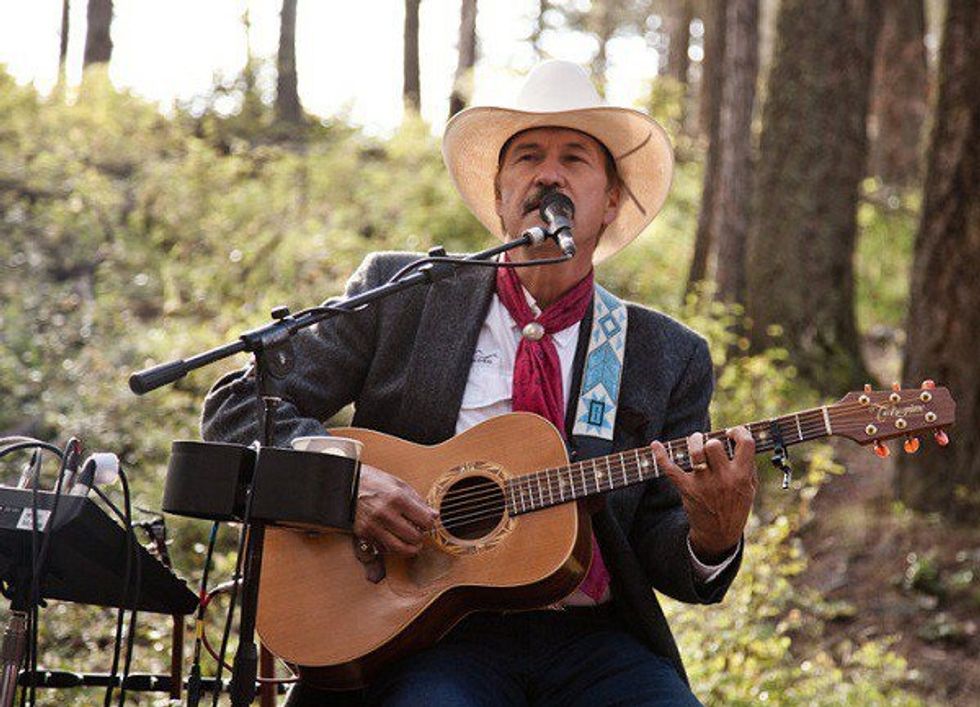 Oh dear. This is the most shocking horribad terriscandalous news ever! The Washington Free Beacon revealed Wednesday that Rob Quist, the awesome cowboy folk singer Democrat running in the special election for Montana's sole House seat, has in the past performed for money in front of NAKED PEOPLE. Here's the lede, if you can manage not to faint while reading it:

Quist, running to represent Montana in Congress, is featured front and center on the nudist resort's website playing the guitar with his singer daughter. Both are clothed, though others on the website's homepage are not.

Since the story ran, the Sun Meadow Resort -- which is in Worley, Idaho -- has removed the photo of Quist and his daughter Halladay, but the original version is archived on the Wayback Machine. Beware -- if you squint, you can almost see a lady's butt! Here's the shocking, shocking photo of Quist and his daughter doing music; you'll have to imagine the naked people listening:

It's not exactly Russia Hacked The Election stuff, but as oppo research goes, it'll have to do, we suppose. The Free Beacon did its best to document the full record of Quist's proximity to other people's dangly bits, noting that he'd performed at Sun Meadow in 2009, "during the second annual Skin to the Wind Festival of Fun," when the resort attempted to set a record for "the largest skinny dip ever in North America." Does the Free Beacon even tell us if they succeeded? It does not. What kind of journalism is that? Most of the story is about all the things people do nekkid at the resort, like cavorting and romping in the buff, plus "partaking in nude volleyball, nude kite-flying, and nude archery. Guests can go cross-country skiing in the nude during the winter months."

And at concerts, just like the ones Quist played, "attendees sit naked in metal folding chairs during performances. It is unclear whether Quist ever performs in the nude." But they'll ask, because Srs investigative journamalism.

The Wingnuttosphere has dutifully tried awfully hard (HA! HA!) to turn the story into something scandalous. We're almost charmed by the effort put into this headline by the "Conservative Tribune": "Sick: Dem Candidate Headlines Nudist Show… With Own Daughter!"

The text tries, it really does, to work up some righteous outrage:

Quist is featured prominently on the resort’s website, along with his daughter Halladay, who has also been a frequent performer for the nudists, according to the report. The duo are pictured wearing clothes on the website, and it was unclear whether they have previously performed clothed or otherwise.

That last sentence, we should point out, doesn't make a goddamn bit of sense. It's a clumsy borrowing from the Free Beacon story, but also hints maybe Quist and his daughter sang songs nekkid together, maybe, but no one knows! Then the next graf notes Quist and his daughter have indeed sung together since 2011. So we guess it's pretty clear they HAVE "previously performed clothed." Hell, we bet they've even worn clothes TODAY.

Do they belabor the point? Why, yes, yes they do!

Exploring and enjoying nudity with family members, particularly father and daughter, doesn’t exactly sit well with the vast majority of Americans, who largely view such things as perverse and intrinsically counter to the Judeo-Christian values most Americans still hold.

Shame on you, maybe-naked Rob Quist and your maybe-naked daughter, you pervert! How dare you claim to reflect Montana values, taking your daughter across state lines for purposes of engaging in public song in front of naked people.

Quist has so far not commented on the story, possibly because translating an eyeroll into the language of folk music takes time. His Republican opponent, Wisconsin billionaire Greg Gianforte, had no comment either, but we have every reason to believe he regularly takes off all his clothes and rolls around naked in a big pile of money. Don't they all?

Now get to Open Threading, in whatever state of dress you're comfortable with.

Yr Wonkette has never played music for nudists, but we have written without pants, as one does. Please throw money at us using the "Donate" linky below!