Oh Nothing, Just Another Member Of The Bush Family Schmoozing For Hillary Clinton 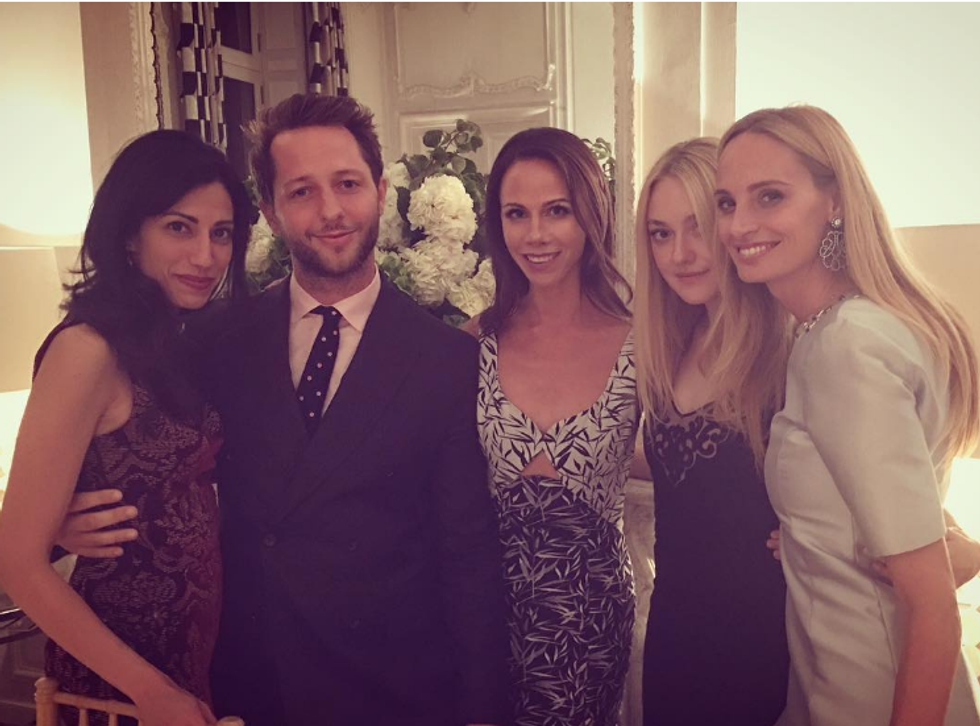 Dakota Fanning and some other people we dunno

Bush posed for a picture with Huma Abedin, the longtime Clinton aide who was hosting the fundraiser with Vogue editor-in-chief Anna Wintour.

The photo was then posted by multiple event attendees, including Lauren Santo Domingo, co-founder of the online fashion website Moda Operandi, who included the hashtag "#imwithher."

Here is a picture of Babs and all her pals, like Huma and Dakota Fanning and Lauren Santo Domingo, who posted this picture on the Instagrams:

SWANKY. The Bushes -- they are just like you! They go to Paris to party with Anna Wintour! They say, "HEY 'KOTA FANNING!" and Dakota Fanning says "Wut?" And they say, "Let's take a picture with all of our best friends for the Instagrams!" And Dakota Fanning says, "K." (What, you do not do these things? You must not get out much.)

The sexxxy man in that picture is Derek Blasberg, who, according to his website, is either the "Truman Capote of his generation, or the Carrie Bradshaw." He posted a different picture of those same people on Instagram too, with a #werewither hashtag:

Awwwww, selfies! BUT THEN, according to Politico, Fuckin' Derek deleted it, and then reposted it on Instagram and also on Twitter WITHOUT the #werewithher hashtag:

Why would fuckin' Derek remove the hashtag? Is that a "Carrie Bradshaw" move? We think not. More like a Miranda move, AT BEST. [Editrix here: I think we can all agree that it is a CHARLOTTE move, and Miranda would bitch her out for not having the courage of her feminist convictions.] Definitely not a Truman Capote move. PFFFFFFFFFT Derek ruins everything.

[wonkbar]<a href="http://wonkette.com/606747/george-h-w-bush-voting-for-hillary-clinton-like-all-patriotic-americans"></a>[/wonkbar]Anyway, where were we? Oh yeah. Another Bush being shillary for Killary. You'll remember just recently we learned George H.W. Bush is in the tank for Hillary. We know Barbara Bush Version 1.0 is so appalled by Trump she can't even. Laura Bush has quietly signaled she might be voting for Hillary, and even Dubya went off on Trump at a Rob Portman fundraiser, without saying Trump's yucky name.

[wonkbar]<a href="http://wonkette.com/605110/is-george-w-bush-in-the-tank-for-crooked-hillary-clinton-we-are-just-asking"></a>[/wonkbar]Little Jebbington Bush is having a temper tantrum saying he won't vote for NEITHER of those people running for president. Worse than that, he reacted to news of his daddy (who is not very proud of him) voting for Hillary by calling him a "frail, 92-year-old man." Jeb Bush is a little twat, and we're pretty sure next time his mom sees him, she's going to ground him and take away his video games and make him sleep in the barn and yell at him and fart on him, because that's what Bar does, as far as Wonkette knows.

The point is that basically the whole Bush family is in the tank for Hillary and it's time for Jeb to rejoin the family, in more ways than one. And to those of you out there who say this means THE BUSHES ARE JUST LIKE THE CLINTONS WHO ARE JUST LIKE THE BUSHES, THE TWO PARTIES ARE THE SAAAAAAAAAME, shut the fuck up. Because if by "the same" you mean both families think Donald Trump would be worse at presidenting than George W. Bush, then fine, they are the same, YOU WIN.