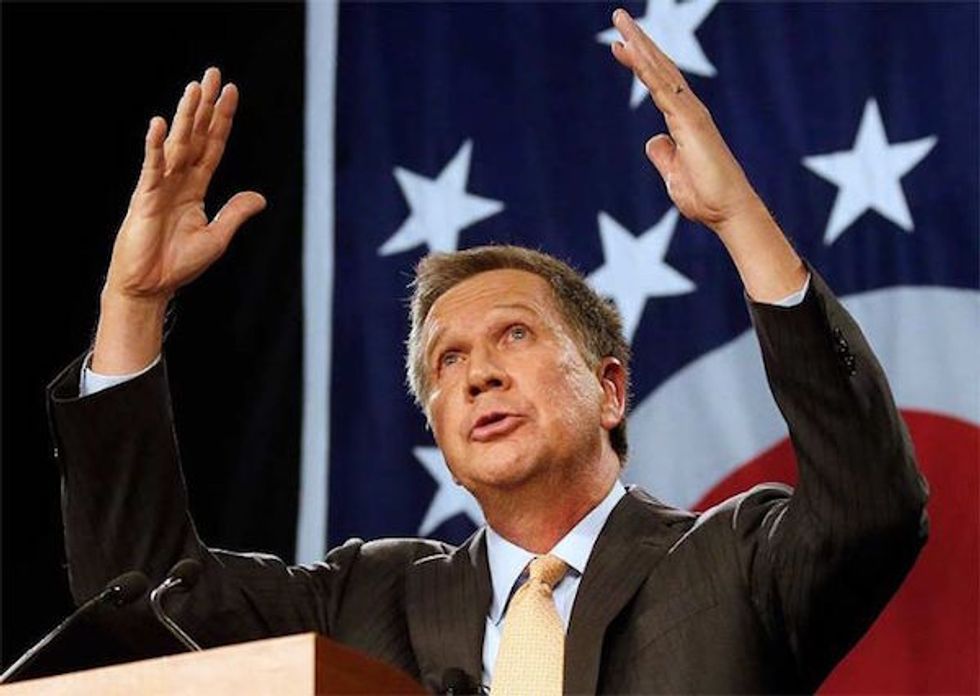 Last week, Ohio Governor John Kasich passed a law outlawing abortions after 20 weeks. In doing so, he also vetoed a bill passed by the Ohio legislature that would outlaw abortions after about six weeks, which would have given abortion-havers one or two weeks after first missing their periods (if they're regular) to have their legally mandated "abortion counseling session" and then wait at least 24 hours before having an abortion.

The bill Kasich vetoed is known as a "Heartbeat Bill" -- although that is a medically inaccurate misnomer. As the wonderful Dr. Jen Gunter points out, this would be more accurately termed a “fetal pole cardiac activity” bill. You see, although fetal "cardiac activity" can be detected at 6 weeks after conception, it's not at all what we think of as being a "heartbeat." In fact, heart tissue cells don't even begin to organize until about 20 weeks after conception.

There's no science behind these bills -- they're simply meant to tug at the heartstrings of non-fetal Americans, who will hear the term "Heartbeat Bill" and assume that the fetus is READY TO LOVE YOU, and is "this close" to being a fully formed person, when in fact it looks more like this at that stage:

Whatever we call it, however, they want it and aim to have it! The Ohio House says it is only two votes shy of the 60 votes it would need in order to be able to overturn Gov. Kasich's veto of the bill.

Speaker Cliff Rosenberger (R., Clarksville) said Wednesday that talks continue about potentially coming back during the week between Christmas and midnight on New Year’s Eve to consider an override of that bill and any other measure the governor might veto in coming days.

“If we feel we need to come back, we’ll come back,” Mr. Rosenberger said.

“We may have to watch the ball drop from the House floor,” he added.

However, Gabriel Mann, spokesman for NARAL ProChoice Ohio, points out that they may not be as close as they seem. Some legislators, he suggests, may have only voted for the bill because they knew Kasich would veto it anyway. Gabriel Mann has more faith in human beings than I do, I suppose.

Anti-choice wackjob nice lady Janet Porter of Faith2Action is, in the meantime, imploring her supporters to contact members of the Ohio legislature, and sending out emails stating “Don’t give up — we have never been closer to ending abortion than we are right now!”

Except not, because "heartbeat bills" have never, ever passed constitutional muster. They're not legal. You cannot have them. At least not right now -- at least not until one of the liberal SCOTUS judges falls down dead or retires and is replaced by whatever asshole Trump comes up with. PLEASE DON'T DIE, NON-SHITTY SCOTUS JUDGES.

This, of course, is why Kasich vetoed the "Fetal Pole Cardiac Activity" bill in the first place. Because, as much as he might love the idea of banning all the abortions, he knows that Roe v. Wade allows women to have them up until the point of viability, and that there is a likelihood of even his dumb-ass 20-week abortion ban getting blocked by the courts for being unconstitutional, as has happened in Arizona, Georgia, and Idaho. He's trading in something he knows he won't get away with for something he thinks has a better chance.

Let's all hope that these Ohio legislators have a lovely holiday, trying to get it together to pass something that will 100% definitely be found unconstitutional by basically any court in the land. I'm sure they'll all feel it's worth it in the end.