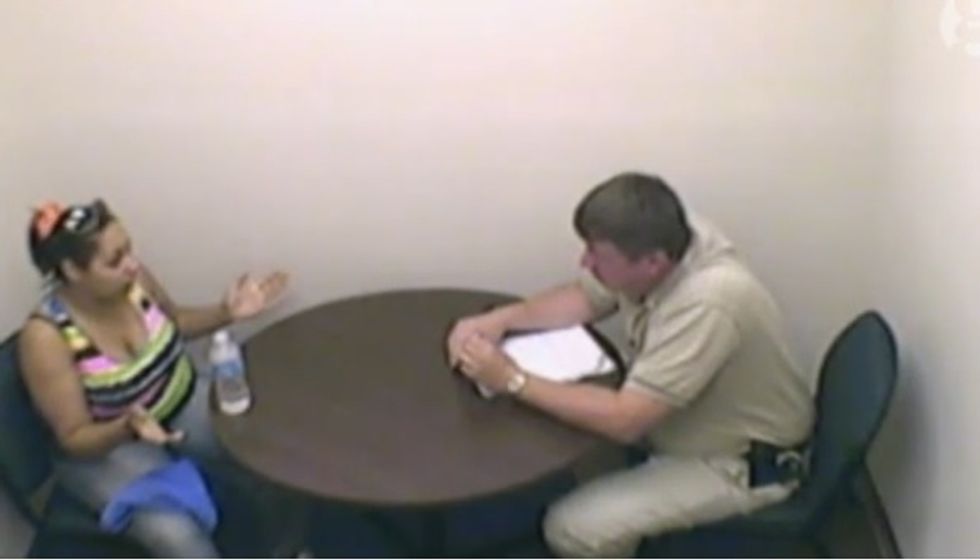 Remember John Crawford, shot to death by police in an Ohio Walmart for carrying a BB gun he'd picked up off the store's shelf? For extra "fun," we bring you The Guardian's story on the interrogation of his girlfriend, Tasha Thomas, in an apparent attempt by police to prove that of course Crawford had it coming, don't you know he was black?

The questioning, performed by Detective Rodney Curd, is a model of aggressively sweating a suspect, using techniques designed to get at her vulnerabilities and to push her toward admitting her wrongdoing. Of course, it's not an especially useful bit of police work when the person being interrogated is in fact perfectly innocent and the investigator is lacking the most basic facts of the case.

Although a caller to 911 had said that Crawford was pointing the gun at people, surveillance video shows that he was actually just carrying it around while talking on his cell phone (to his former girlfriend, who heard him die when he was shot). The video shows that Crawford was shot almost immediately, and never raised the supposed weapon. Ohio is, of course, an open-carry state, where it is perfectly legal to walk around with an AR-15 as long as you aren't pointing it at anyone and meet local standards of whiteness.

Shortly after the shooting, Curd questioned Crawford's girlfriend, Tasha Thomas, who had gone with him to the Walmart but was not nearby when he was shot. In fact, she only learned of his death after Curd had interrogated her for 90 minutes, accusing her of lying, telling her she was going to jail, and letting her know that he suspected her of being high on drugs. (The Guardian's video of portions of the questioning isn't embeddable; it can be seen here.)

While questioning Ms. Thomas, Curd believed that Crawford had brought a real actual gun with him into the store, since after all he was shot dead for having a gun. His questioning of Thomas was designed to get her to admit that she was in on Crawford's nefarious plot:

Curd promptly asked Thomas whether she and Crawford had criminal records. Already tearful and breathless, Thomas explained that she may have had some traffic offences and had been arrested for petty theft as a juvenile.

The detective then became increasingly aggressive and banged on the table between them with his hand. “Tell me where he got the gun from,” Curd repeated. Thomas insisted Crawford had been carrying only a white plastic grocery bag when they arrived at Walmart to buy the ingredients to make s’mores at a family cook-out.

Asked one of several times whether Crawford owned a gun, Thomas said: “Not that I know.”

Curd told her: “Don’t tell me ‘not that you know’, because that’s the first thing I realise somebody’s not telling me the truth”.

Curd also floated the possibility that Crawford had gone to the Walmart to murder his former girlfriend, LeeCee Johnson, who was the mother of his two children. Apparently, going to Walmart to kill someone is a pretty common scenario in Ohio. Ms. Johnson was actually at home and nowhere near the store, but Curd pressed his developing theory of the case as he questioned Thomas:

“Did he ever mention ‘I’m going to shoot that bitch’ or something like that?” the detective asked Thomas, who insisted that Crawford had not. Johnson, whom Thomas had never met, was miles away and listened over the phone while Crawford died.

Just to make sure Thomas was good and terrified, Curd also suggested that she was high or drunk: “Have you been drinking? Drugs? Your eyes are kind of messed-up looking.” Imagine that: A woman who's being accused of covering up her boyfriend's nonexistent murder plot has been crying, and her eyes look funny. That there is some impressive police work. Thomas repeatedly protested that she was telling the truth, but Curd had seen enough guilty people to know that she was obviously lying. The first rule of policing, after all, is that everyone's guilty of something.

At the end of the interview, after threatening Thomas repeatedly with jail for her failure to cooperate, Curd finally let Thomas know that Crawford had died:

“As a result of his actions, he is gone,” said the detective, as she slumped in her chair and cried.

Curd later said he had no idea that Crawford had picked up the replica weapon off a shelf in the store, and two days after the incident told Ohio Bureau of Criminal Investigation agents that he "believed the deceased had brought a weapon into the Walmart and geared the interview with that assumption." We're not experts on criminal investigations, but since the fact that Crawford had found the BB gun in the store was known fairly quickly, isn't that something an investigating detective ought to be informed of? Still, police can't be too careful, and based on what we know of Ohio police procedure, Tasha Thomas should be thankful that she got out of the interview room without being homicided.