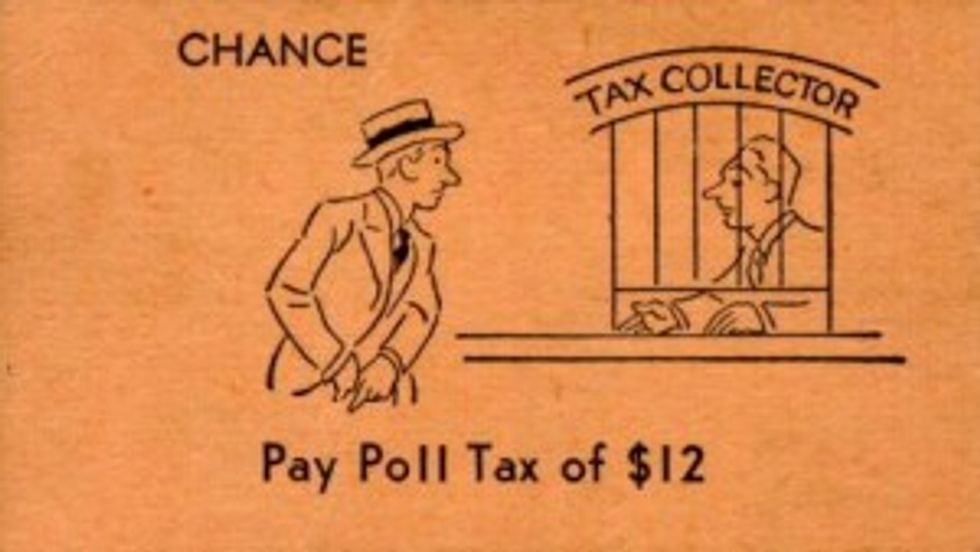 Ohio is on top of our nation's massive problem with voter fraud. You know how Democrats do, during early voting, they vote 900 times, and then they vote 900 more times on Election Day, under the names of so many dead people. This is such a big problem that Ohio science studies show that 0.002397 percent of the votes cast in the 2012 election were bad, rude, fraudulent votes. So, we gotta tackle this! Thank goodness Ohio state Rep. Andrew Brenner is around, to put forth a new voter ID bill, Ohio HB 189, that, among other things, will charge voters $8.50, so they can get an ID for voting purposes. Poll taxes! So retro!

Though the bill permits voters who lack ID to obtain a special voter ID card issued by the state, this card costs $8.50. One provision of the bill does permit voters to be exempted from this fee if their income “does not exceed one hundred per cent of the federal poverty guidelines,” but that’s an annual income of only $11,770 a year for a single person in 2015.

Oh, how nice of them to say that if you make a whopping 23 grand a year, which, we can tell you from personal experience, is ALL THE RICHES, you don't have to pay an extra fee in order to have an ID that allows you to vote. Of course, we are going to guess that many of the people who don't have ID cards are very, very poor, so maybe we should be saying "thank you, Ohio Republicans, for loving poor people so much that you will give them a free ID to vote with!" But nah, fuck those Ohio Republicans.

Because this actually doesn't just affect extremely poor people, but it definitely affects a lot of people who might be tempted by Satan into voting for Democrats. Policy Matters Ohio, which MSNBC reports is a "liberal leaning think tank," so obviously they are liars, breaks it down:

More than one in 10 Ohioans lacks a photo ID. The new requirements would have a disproportionate impact on elderly voters, young adults, minority voters and low-income voters, all of whom are statistically less likely to have an Ohio driver’s license. Who lacks photo IDs?

Oh, that's nice! You'd think maybe they would be worried about accidentally disenfranchising seniors, but what's a few grannies from the retirement home compared to all the black people this bill could keep away from the polls? And of course, college students have a well known liberal bias as well, so let's make it tougher for them too!

Oh hey, breaking news, by the way! Poll taxes are unconstitutional, according to the Constitution. We know, you Ohio Republicans think you are being clever, by not charging for the actual act of voting, but instead charging for the ID people need, in order to vote. But still, fuck you.