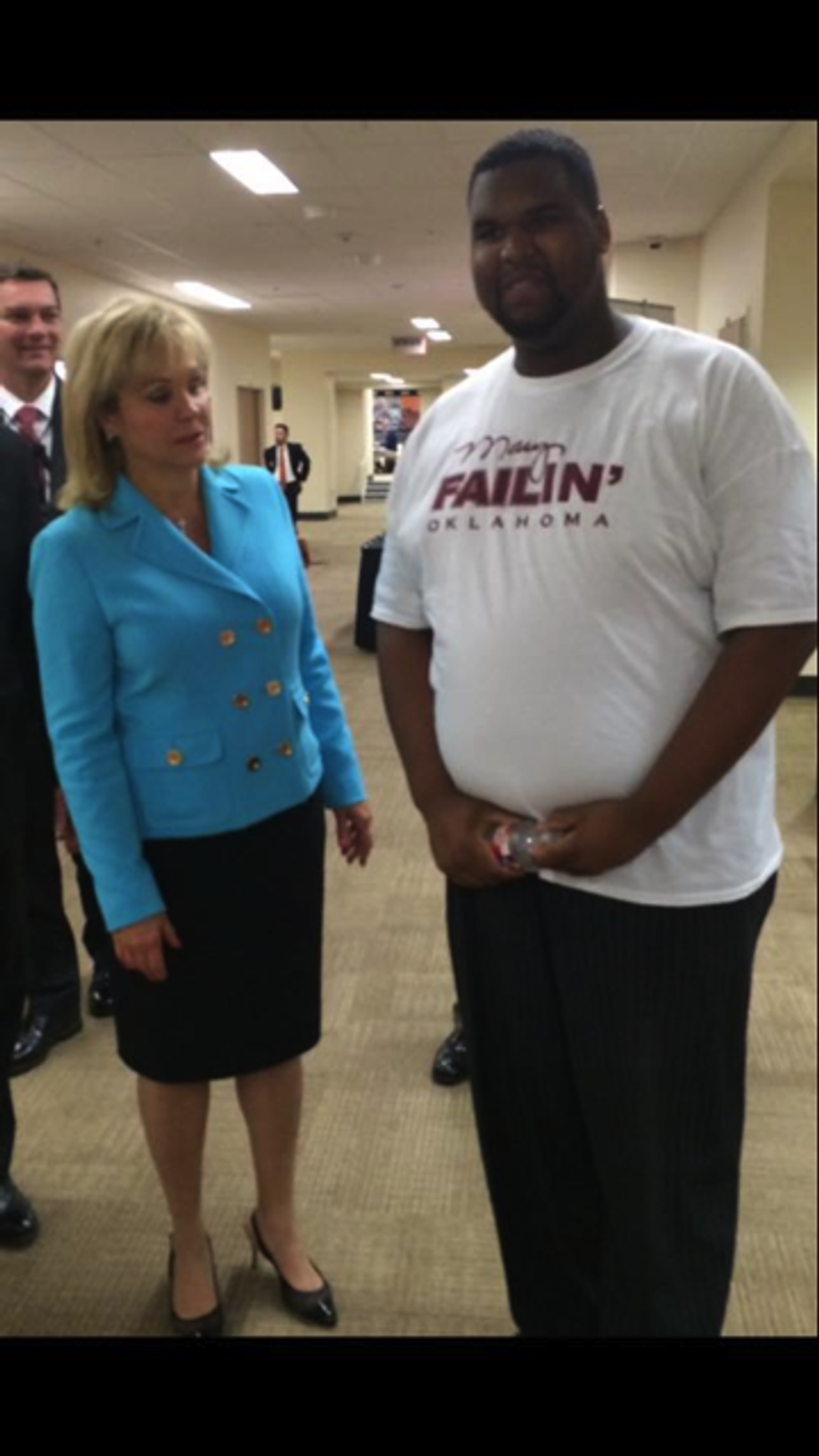 Oklahoma Gov. Mary Fallin faced off against her Democratic opponent, some guy, last night in a Lincolnesque triumph of rhetoric and philosophy. Also, she was pretty dumb. Here, let's look at what she had to say about whether the oil and gas industry is causing the rash of earthquakes rattling those poor dumb Okies:

“Oklahomans have been concerned with earthquakes and what’s caused them. We`ve had a long history in the state of Oklahoma of earthquakes. We have a lot of scientists and we have the U.S. Geological Survery, we have other experts from our universities, Oklahoma State, University of Oklahoma. We have industry sector people who are looking at what is the cause of the earthquakes. Are they man made or are they just a natural course of nature itself,” said Gov. Mary Fallin.

Okay, the words seem to all be in the correct place; subject-verb agreement is all ship-shape. There are no actual Palinesque jamabalayas of derp. It's just stupid. Is the oil and gas industry to blame for Oklahoma's earthquakes? She's not a scientist, but Oklahoma has scientists, and they will do the science until the very second they say OH HEY MAYBE THE OIL AND GAS INDUSTRY IS CAUSING ALL THESE EARTHQUAKES, which they already have. Scientists? What scientists? Mary Fallin is not familiar with those.

There was some other dumb stuff about education and Obamacare (the Democrat, some guy, was like, HEY, how about we use that Obama Medicaid money to insure 180,000 Oklahomans, and Mary Fallin was like, naaaah), and also Fallin's veto of a bill to pay for storm shelters at schools, since CHILDREN WERE DYING IN TORNADOES AT SCHOOL.

THE MOORE TORNADOS AND ALL THE TORNADOS THAT WE HAD THROUGHOUT THE COMMUNITY AND ALL THE DIFFERENT DEVASTATING THINGS WE'VE HAD OVER THE LAST FOUR YEARS HAS BEEN VERY DISHEARTENING FOR THE STATE OF OKLAHOMA.

WAS IT, MARY FALLIN? WAS IT "DISHEARTENING"???

I WAS THERE ON THE GROUND DURING THE MOORE TORNADOS. I WAS THERE WITHIN A COUPLE HOURS AFTER IT HIT TO WALK THROUGH THE DEVASTATION TO KNOW THAT WE HAD LOSS OF LIFE DURING THAT TIME, TO WORK WITH THE FIRST RESPONDERS. I WANT TO GIVE A SHOUT OUT TO ALL THE FIRST RESPONDERS AND ALL THE CHARITIES THAT WORKED SO HARD TO HELP PEOPLE WHO WERE SUFFERING A GREAT LOSS AT THAT TIME.

BUT CERTAINLY WE WANT TO MAKE SURE OUR CHILDREN ARE SAFE IN THEIR SCHOOLS. I DID PROPOSE THAT WE WOULD ALLOW SCHOOLS AND LOCAL CONTROL OVER LOCAL SCHOOL DISTRICTS AND LOCAL CITIZENS TO BE ABLE TO HAVE THE OPPORTUNITY TO VOTE FOR A BOND IF THEY CHOSE TO BE ABLE TO PUT IN SAFE ROOMS OR SOME OTHER SAFETY PRECAUTIONS.

Obviously, if the people of a community want their children to die in tornadoes at school rather than issue a bond to pay for storm shelters at school, it is not Mary Fallin's job to stand in their way!

ACTUALLY REPRESENTATIVE DORMAN DID PROPOSE THAT A COUPLE YEARS AGO. THE SAME POSITION WHEN HE TALKED ABOUT HE WANTED TO INCREASE PROPERTY TAXES. I WOULDN'T BE INCREASING PROPERTY TAXES. THE VOTERS WILL BE VOTING ON THAT. THAT'S WHAT'S CALLED LOCAL CONTROL.

THIS YEAR HE PROPOSED THAT WE SPEND $500 MILLION ON A BOND ISSUE. THAT MONEY WOULD HAVE TO COME SOMEWHERE OUT OF THE STATE BUDGET. BOTH OF US CARE DEEPLY ABOUT CHILDREN, SAFETY, STORM SHELTERS. I WILL CONTINUE TO PUSH WE HAVE LOCAL CONTROL WHERE LOCAL COMMUNITIES CAN DECIDE WHAT THEY NEED IN THEIR INDIVIDUAL COMMUNITY.

Ayup. Local communities can decide their children can die, it is called states rights or something, probably.

Mary Fallin vetoed a bond issue for storm shelters in schools following the "disheartening" Moore tornadoes. Joe Dorman is not Mary Fallin. Let's give him some money. And while we're at it, are you an Honorary Pott County Democrat yet? Don't you think you should be?