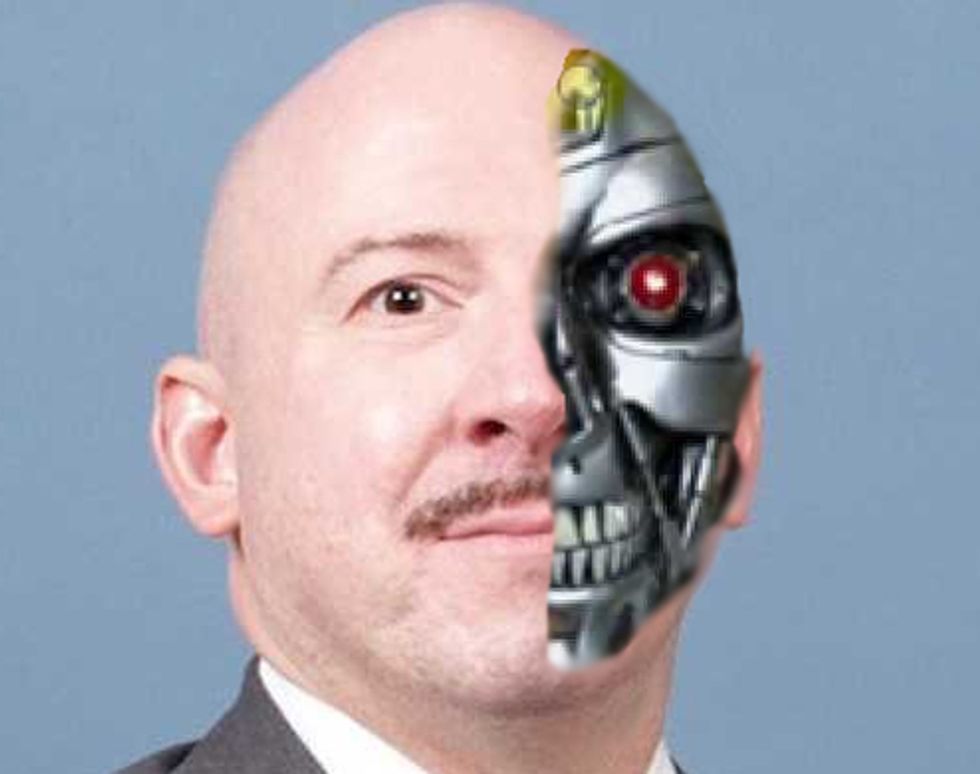 So apparently this is just Weird Candidate day at Yr. Wonkette (OK, maybe every day is that). In addition to ourrecovering public-wanking addict in Michigan, we also are delighted to bring you this important news about Mr. Timothy Ray Murray, a Republican candidate for the Oklahoma House: Unlike the other guy, he is very definitely NOT a robot, an android, a replicant, or a cyborg. He is 100% positronic about that!

On his campaign homepage, Murray makes it very clear that he is "a human, born in Oklahoma," and that he

will never use a look alike to replace my (The Office’s) message to you or to anyone else, as both the other Republican Challengers have.

Yep. He accuses his opponents of being replicants, or perhaps zombies or golems. The exact technology hasn't yet been identified, but they are NOT who they claim to be. See, here's what happened:

Rep. Frank Lucas, and a few other Oklahoma and other States’ Congressional Members were depicted as being executed by The World Court on or about Jan. 11, 2011 in Southern Ukraine. On television they were depicted as being executed by the hanging about the neck until death on a white stage and in front of witnesses. Other now current Members of Congress have shared those facts on television also. We know that it is possible to use look alike artificial or manmade replacements, however Rep. Lucas was not eligible to serve as a Congressional Member after that time.

The World knows the truth and We must always display and communicate the truth. I will always share public information with the truth when honored to serve as your Representative.

And so we must ask: Where are Mr. Lucas's long-form Voight-Kampff test results?

Timothy D. Murray also explains that he has unassailable credentials:

I have been sworn to life time duty as Ambassador for The United States People for The United Nations by U.S. President Gerald R. Ford. He encouraged me to run for political office ...

I have exercised The People’s request as their Ambassador several times to The United States Branches with urgent United States Constitutional matters and with other urgent matters.

He is a lifetime Ambassador, and has exercised the People's request to The United States Branches. What more could you ask for from a representative? How about this? He's the only candidate we know of who's solemnly promised to never replace himself with a robot:

That's an ironclad guarantee that you never heard uttered by Mitt Romney, now isn't it? Listen, and understand! Timothy D. Murray is out there. He can't be bargained with. He can't be bribed. He doesn't feel pity, or remorse, or fear. And he absolutely will not stop, ever, until he is YOUR state representative.

Sadly, in Tuesday's primary, it appears that the nonhuman replacement for the late Frank Lucas was able to fool -- or hypnotize -- 83% of the voters, while certified human Timothy D. Murray was only able to get 5% of the vote.

The only scrap of good news here is that, with the electoral success of Lucas and apparently several other androids, the United states has clearly surpassed Japanese android technology.

Following his primary loss, Mr. Murray was unavailable for comment, but released the following videotaped statement:

Follow Doktor Zoom on Twitter. He has this terrible pain in all the diodes down his left side, but does anyone care?