Oklahoma Jihad Update: Please Be More Afraid. You Are Not Afraid Enough Yet 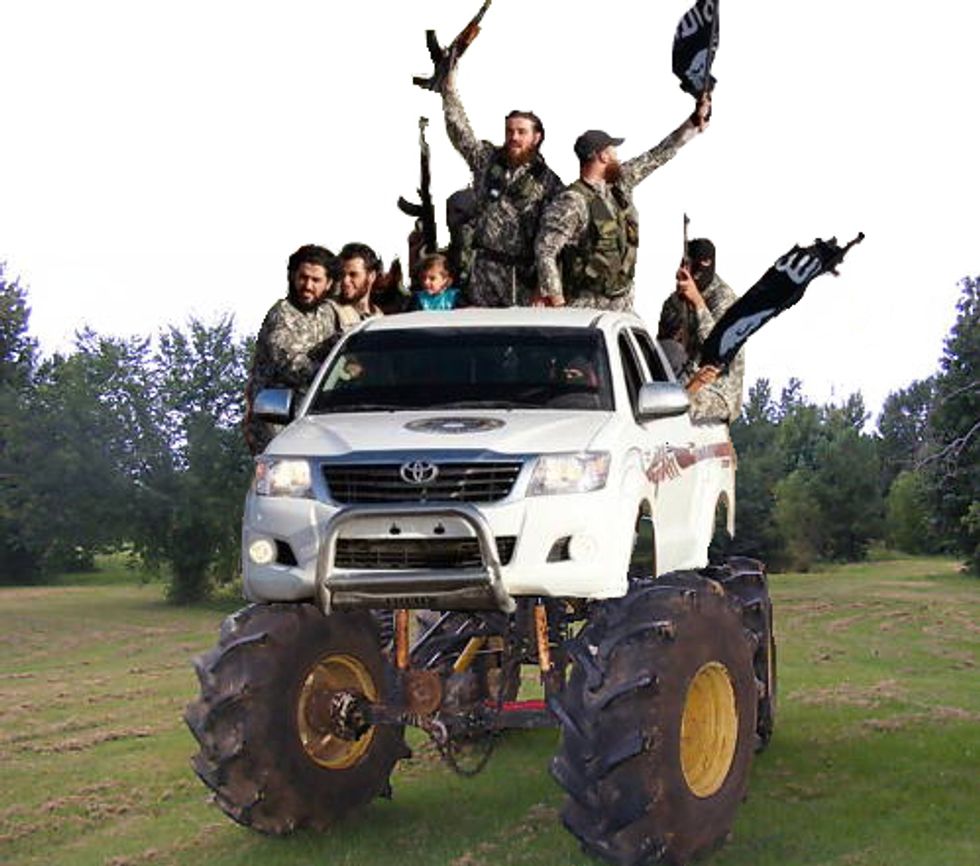 On Friday, we brought you the story of ahorrific murder committed in Moore, Oklahoma. Alton Nolen, a man who was fired from his job at a produce processing plant, killed one woman and injured a second, and now the wingnuttosphere is in a tizzy about jihad in Oklahoma, because Nolen was said by co-workers to have tried, unsuccessfully, to convince others to convert. Therefore, in the minds of top thinkers like Pam Geller and Jim Hoft, the Stupidest Man on the Internet, Nolen's rampage is the inevitable result of Islam, and anyone who thinks this was merely "workplace violence" is willfully blind to the reality of the Muslim Threat. See, for instance this bit of screaming from Hoft today:

Since Nolen survived being shot by the Chief Operating Officer of the plant, which saved the life of the second worker Nolen attacked, we will no doubt learn more about his motives. Pam Geller has made much of Nolen's facebook, which is full of posts praising radical Islamists -- so it's definitely possible that once he was fired, Nolen may well have decided to do his very own half-assed jihad, because he was a moron. Also, too, an Oklahoma TV anchor tweeted Friday that a worker at Vaughan Foods said Nolen had been "shouting Islamic phrases" during the attack:

The BBC reports that in addition to that unconfirmed story,

One rural Oklahoma newspaper has reported that Nolen was fired after he got into an argument about the need to stone women if they violated Islamic law.

This pretty much proves that Nolen was an actual jihadi terrorist, and also that Islam made him do what he did. You know, like how the guy who shot up the Knoxville Unitarian church was pretty much typical of people who watch Fox News all the time.

Just for the sake of elevating the Oklahoma Terror Alert Level from "Pants-Filling" to "Screaming Spittle-flecked Panic," we should note that a second Muslim person in Oklahoma was also arrested Friday after he lost his job and threatened to cut off a former co-worker's head:

Jacob Mugambi Muriithi, 30, is being held in the Oklahoma County jail on a terrorism complaint. His bail is set at $1 million [...]

Muriithi was identified as a native of Kenya who is living in Oklahoma City. He worked at Bellevue Nursing Home in northwest Oklahoma City, police reported.

The co-worker reported Muriithi threatened her while they were both working at the nursing home Sept. 19, a police detective wrote in an arrest warrant affidavit.

The woman was not identified.

She said Muriithi identified himself as a Muslim and said he “represented ISIS and that ISIS kills Christians,” the detective told a judge in the affidavit. The two had not worked together before.

Also, when the co-worker asked Muriithi, who is a Kenyan Muslim just like the president of the United States, why he and his ISIS compatriots kill Christians, he replied, "This is just what we do," according to the detective's report. And that, really, is just about all the proof anyone should need that ISIS has infiltrated Oklahoma and that Muslims are all a bunch of murderous maniacs. The guy admitted it, and he is a self-confessed ISIS operative!

Out in reality-land, Moore police spokesman Sgt. Jeremy Lewis said that the investigation into the killing was focused on "How premeditated it was," which is sort of beside the point, since we all know that all Muslims are just waiting for the chance to behead someone. We saw it on the internet.