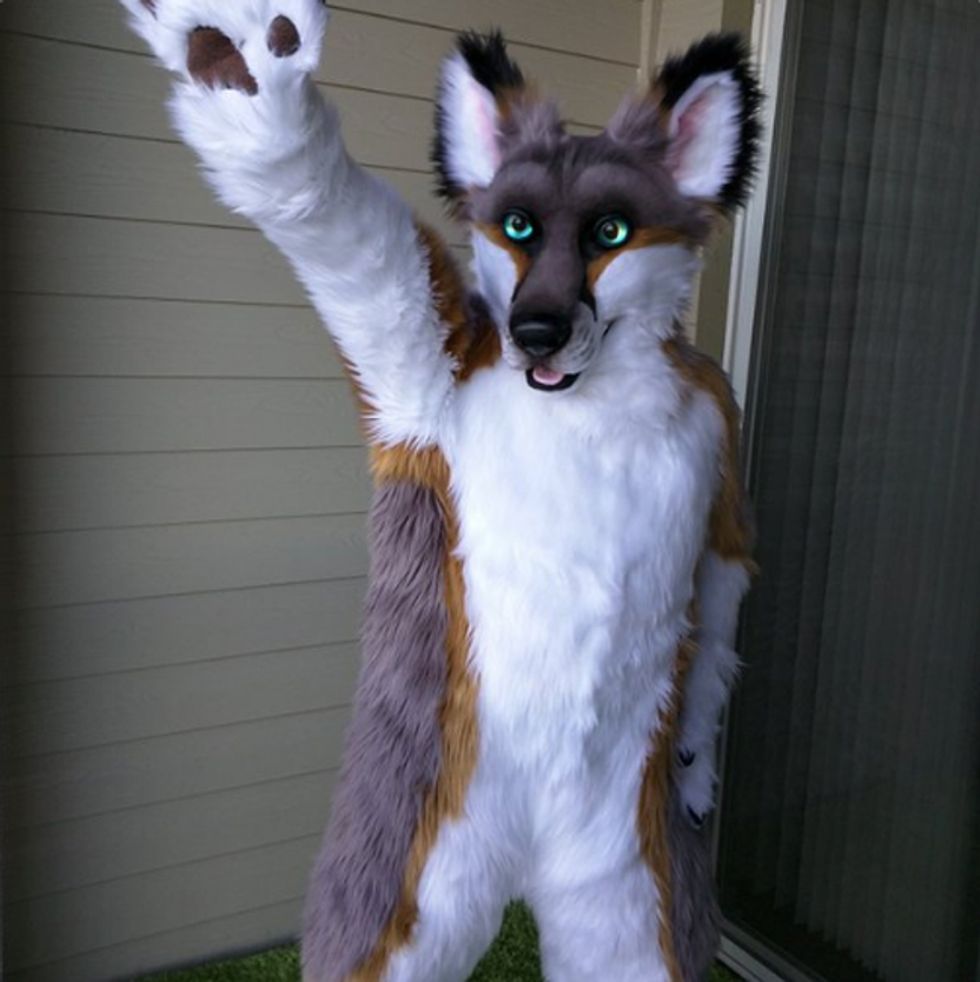 We didn't feel like looking for a picture of the dude on the internet, so here's a Nazi furry.

Bart Alsbrook is the interim police chief in Colbert, Oklahoma. We imagine he's been having a super-nice time taking selfies of himself in a real live police uniform, since, despite his appointment, he's only certified as a reserve officer and would have to get the proper certifications within six months to serve as a real police chief. Things were going just super-swell for him until a reporter for KXII in Oklahoma noticed on the Southern Poverty Law Center's hate map that there was one hate group in the Texoma area called "ISD Records," which "sells racist media and memorabilia aimed at skinheads and white nationalists." Surprise, it was owned by Bart Alsbrook!

With a banner that reads "The Voice of Blood and Honour," an international coalition of racist skinhead gangs, ISD Records features artists like The Klansmen and album titles including "'Hitler was Right'". [...]

We called Alsbrook [and] He denied he was the Bart Alsbrook behind isdrecords.com.

We searched for another Bart Alsbrook and couldn't find another person with that name in the United States.

The site was taken offline within hours of that conversation.

Say it with us: HE SEEMS NICE!

But we can see you out there, prejudging this guy, just because he owns an online Nazi record label/apparel dispensary. Would it change your mind if you knew that, according to Alsbrook, he engaged in a kerfuffle with a bunch of heavy metal skinhead Nazis back in the 1990s, and they stoled his wallet and they have been using his name for their Nazi activities ever since?

No? Because he said that TOTALLY happened.

OK, but what if we told you Alsobrook caught a charge for a tiny wee bit of attempted murder back in the 1990s? Oh, that is not helping his case at all? Gee whiz.

What if Alsbrook was ALSO "falsely accused" of being behind ANOTHER Nazi group/website?

... [I]n 2005, the SPLC identified Alsbrook as Blood and Honour USA's Texas coordinator and the man behind NS88 Videos, with a website similar to ISD Records.

It is truly amazing how skinheads have been framing this guy for decades (DALLAS skinheads, according to Alsbrook!), just to take away his job as interim police chief for Colbert, Oklahoma, a career many have dreamt about, but few have achieved.

The Tulsa World reports that Alsbrook will resign his post, now that his life has been FULLY RUINT by these scurrilous allegations:

He ... said the allegations have ruined his life and that he plans to resign as interim chief and won’t continue as a reserve officer. Alsbrook responded to the Tulsa World by text messages Saturday.

“Someone has been using my name for years on the Internet in regards to racist topics. It’s not me, rather someone who has hijacked my name due to my combativeness and rejection to white power skinheads who were always coming to the heavy metal shows, starting fights and messing up our scene,” he said.

The Tulsa World changed some of the text’s spelling and punctuation for clarity.

Well, we trust that this story has been eye-opening for everyone. When you pray to Jesus tonight, remember to put in a good word for Bart Alsbrook, that all these neo-Nazis will stop ruining his life forever by pretending to be him, perhaps even going so far as to inhabit his body and control his thoughts.

Oh, what a world.

Wonkette salaries are fully paid by loving souls like you! If you love us, click below to fund us!