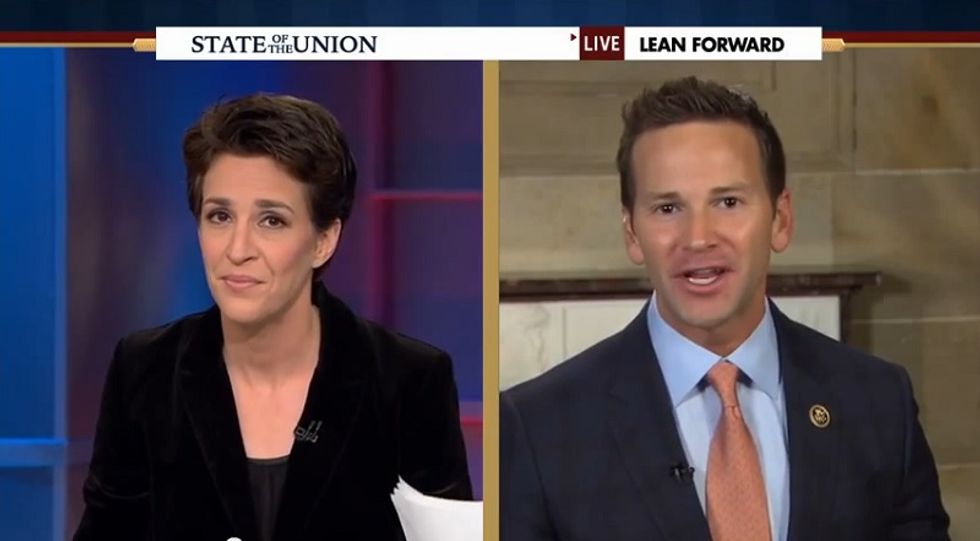 Following the State of the Union address Tuesday, hunky but vapid Illinois Congressmeat Aaron Schock offered this wisdom on the Twitter Machine:

It's so true! Raising the minimum wage won't eliminate poverty, so it's clearly not worth doing. Rachel Maddow asked Schock to explain himself, and he went straight to the GOP myth that the minimum wage is a "starting wage," and only teenagers and people just starting a first job make minimum wage. Isn't it nice to know that the GOP is the party of economic realists? Maddow noted that it's a pretty obvious fact that living on $10.10 an hour is a lot easier than $7.25 an hour, to which Schock had the perfect smart reply:

In other words, we need to create more high-paying "head of household" jobs, and then the minimum wage will be a moot point since only teenagers will have them, and this is supposed to be a realistic view of economic reality. Obviously, we just need some terrific tax cuts and more international trade, and then everything will be wonderful.

And then things went weird. Asked by Chris Matthews if he supported President Obama's proposal for a middle class tax cut, to be paid for by a small tax increase for the very top earners, Schock said that it was nothing less than income redistribution, because Obama insisted on actually paying for the tax cut, which is bad, unlike Republicans, who cut taxes and trust the economy to grow enough to make up for the lost revenue. Seriously, he said that:

As you know, Democrats always make the argument that you have to pay for tax cuts. That's not an argument that Republicans make. We believe we should lower the rates on everyone through comprehensive tax reform.

And how will we make up for the vanishing revenue? MAGIC! Or the huge economic growth that inevitably follows all tax cuts. Just ask Kansas what a huge success that's been!

And then Chris Matthews and Schock argued about whether "cutting taxes across the board" can accurately be described as a "tax cut for the top 1 percent," which of course it can, if you don't mind the top one percent already having obscene wealth and then getting yet another tax cut so they won't cry about the unfairness of $3000 in tax relief for middle income earners.

We'll give Schock this much -- at least he didn't call for the elimination of the minimum wage. He could have gone there, and he didn't, so that may make him a populist hero of some kind.