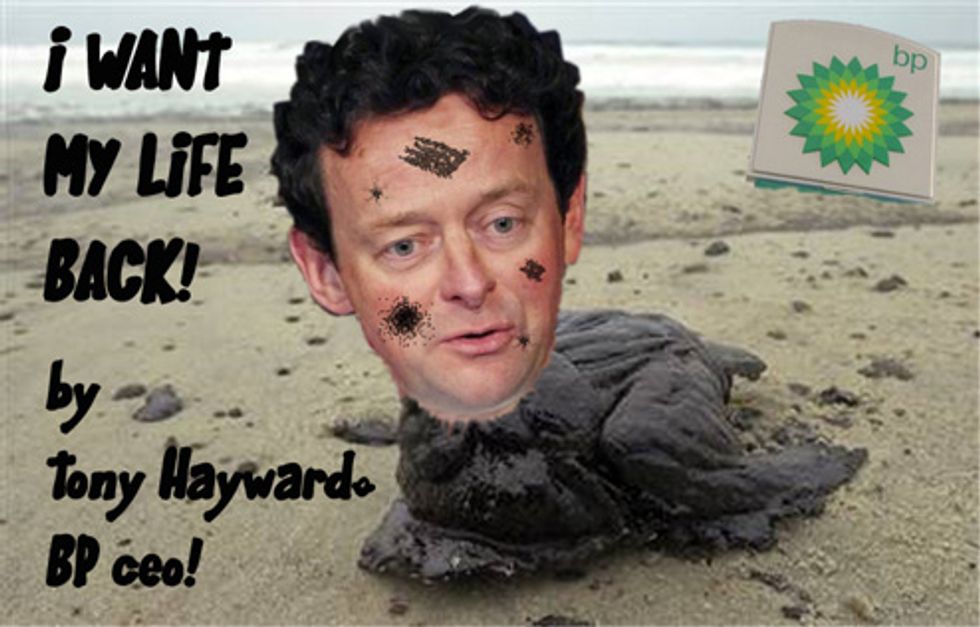 Hello again, Tony Hayward here, chiming in with a quick update on the troubles in your Gulf waters. Still not quite all wrapped up down there, with the well continuing to bleed a bit of oil, but we're working 24/7, should have the difficulties under control rather soon now. Certainly by summer's end, very unlikely to continue beyond that point. Would still be summer in the Southern Hemisphere, no doubt there, if not in the Northern Hemisphere. Quite a busy day morning for me, as well! I'm here in Washington, lovely capital city you've got here, and shortly I'll meet your president. A great honor for me, it should be, meeting your first black president.

Now we've heard a bit of chatter from the press about President Obama being "angry" or "furious" at BP, or even me, personally, and I think we'll be able to quickly see eye to eye and understand the media does like to print a lot of toff. The Business of America is Business, that's what I always heard as a young man, when Lady Thatcher and your President Reagan helped right the world from near catastrophe. How quickly we forget, as my old mum says. Youth today can have no idea what it was like, the blackouts and reading by candlelight, car parks empty in the City, bloody Arabs quadrupled the price of oil in what, a fortnight? Add the IRA terrorists blowing pubs to smithereens and the Bolshy union fanatics shutting down the coal mines, might as well've been the Dark Ages, right?

I'm just a simple geologist, working to make the world a better place. Even in the States, some of you must recall the gas lines and turning down the thermostat to 64 F in wintertime or whatever it was, certainly no fun for anyone. BP didn't cause the accident, of course -- that was the fault of Deepwater Horizon and whatever other American firms -- but you have our word that as long as we're a going business concern, we'll do our best to tidy up your swamplands.

But the crucial thing, for our shareholders, is to remember that not so many years ago it was Shell on top, and we aggressively went after the old boys and today BP is the No. 1 oil company in Europe, not Shell, and it's a bit funny that shareholders and the business hacks complained about my 40% pay increase in 2008, but they certainly had no complaints about their dividends and the share value, did they?

Well, here we are at the White House. Quite an impressive palace, and I do look forward to meeting your president. I'm quite sure he'll be a good fellow and we'll get on famously. Everyone in our position does need to perform a bit for the telly, of course, but after work we're all the best of mates.