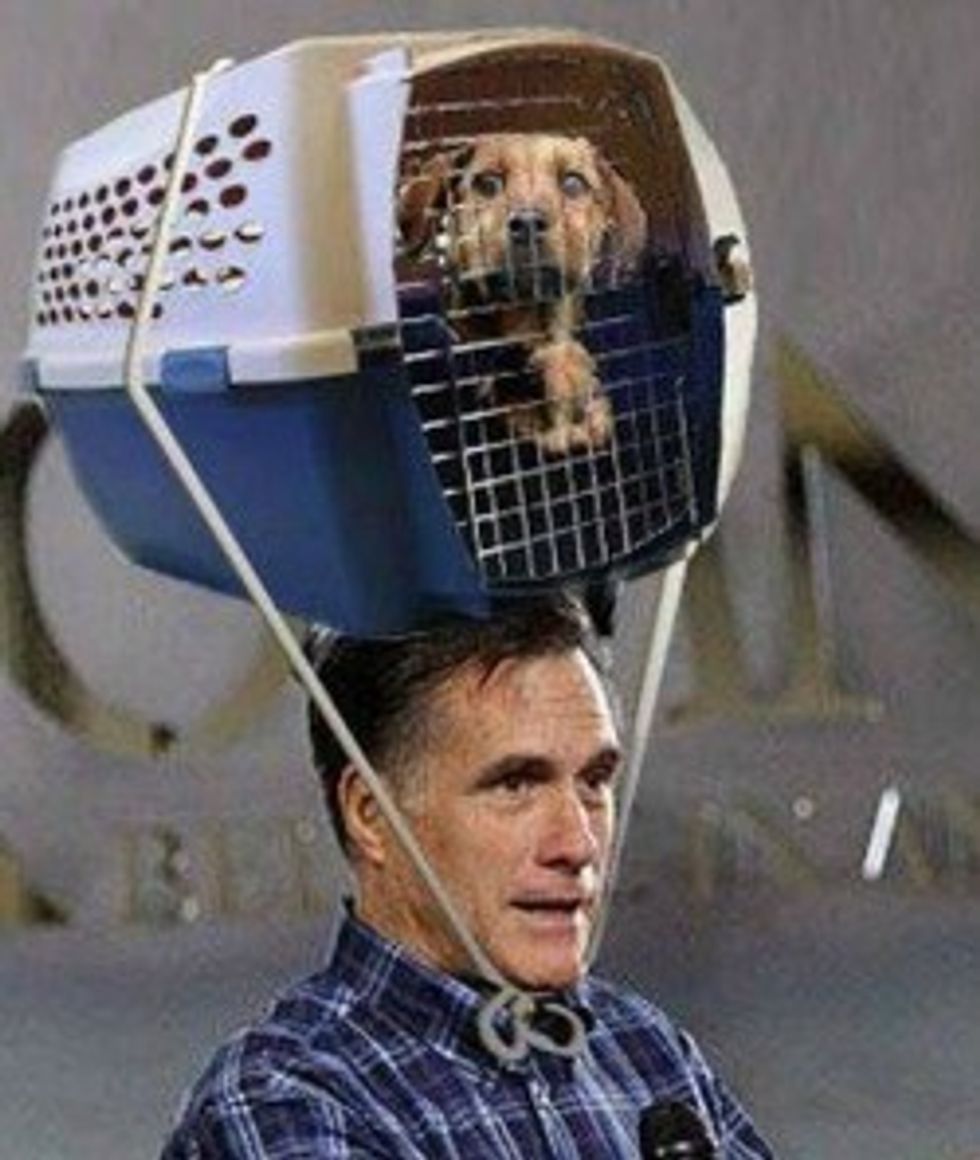 Well look who is the luckiest bastard on earth: apparently one third of Americans do not have an opinion of Mitt Romney for some reason, which CBS has characterized as a “challenge.” Your Wonkette, on the other hand, feels that this might be more aptly described as a “gift” seeing that he is a horrible person who avoids taxes, has a son named Tagg, and has STRAPPED A DOG TO THE ROOF OF HIS CAR. Also, what if a hurricane comes and kills a bunch of people and now we don't get to know who Mitt Romney is? Yes, this is an actual concern articulated by the good people at CBS.

[A] poll released Tuesday shows that, among registered voters, more have an unfavorable view than favorable of Romney - 36 percent to 31 percent. (President Obama's numbers also reflect a slight edge of unfavorable over favorable, 44 to 41.) And yet, after months of a contentious Republican primary season, nearly one-third (32 percent) of voters still don't know enough about Romney to from an opinion.

Among them: 37 percent of independent voters, the very people that Romney needs to win over in order to defeat President Barack Obama in November.

Let’s hope for his sake that these voters aren’t female, Latino/a, black, gay, or Poors.

"You know, this just shows what a bubble that we're in," CBS News chief Washington correspondent Bob Schieffer told "CBS This Morning" host Charlie Rose. "We think everybody is following every, you know, move and turn in this election. One-third of Americans do not yet have an opinion [on Romney].

"That's why, Charlie, this convention is so important and why everybody has an eye on this weather. Because look at the choice that they're going to face here. What if this storm barrels into New Orleans and there is the death and destruction and Americans are in peril?"

Yes. What if this happens? And people die? And then no one has the opportunity to get to know Mitt Romney and be exposed to the possibility that he can pretend not to be horrible for three days straight? Where will we be then??

With Monday's convention schedule swept aside by concerns over Tropical Storm Isaac, the Republicans will start in earnest Tuesday officially nominating Romney, and hearing speeches by his wife, Ann, and a keynote address by New Jersey Governor Chris Christie.

"Behind the scenes, people here are talking about 'What are we going to do?'" Schieffer said. "Should we cancel more sessions of this convention?' The one thing they're even talking about, if it comes to a worst-case scenario, [is] just having Mitt Romney make a speech to the American people. The optics of a split-screen of people in peril over here, and people at a convention having fun, is something they really don't want to face up to.

You had us at the worst-case scenario is “having Mitt Romney make a speech to the American people.