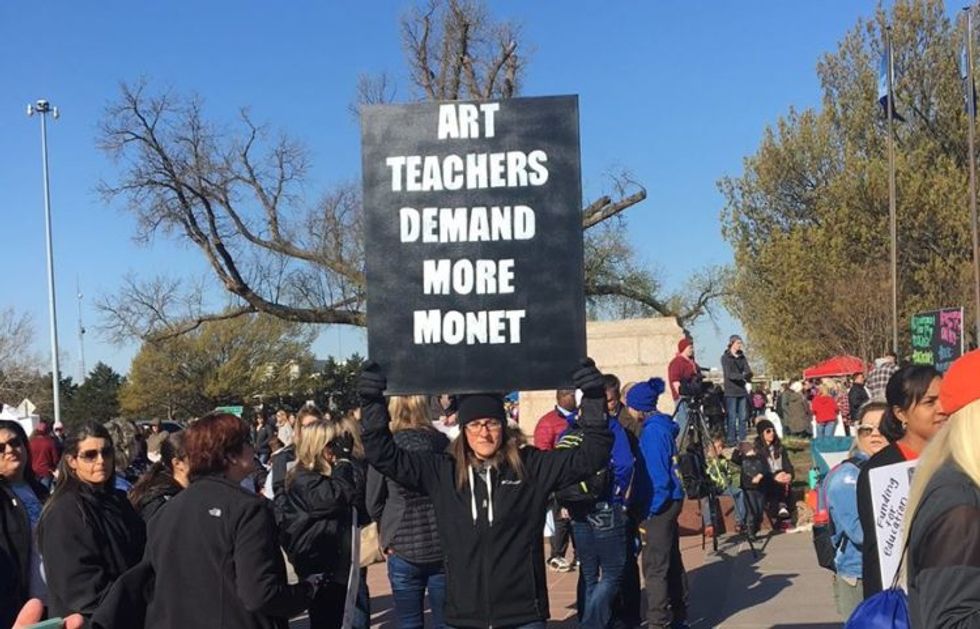 Signs you never saw at a Trump rally, part CCLXIV

The Democratic leadership in Congress has a pretty timely idea: How about we roll back last year's big fat tax cuts for the very richest of rich fuckwads and use that money to improve teacher pay and fix up our public schools?

The proposal, which Democrats are calling "A Better Deal for Students and Teachers" (branding!), was rolled out Tuesday by Senator Chuck Schumer, House Minority Leader Nancy Pelosi, and Senator Patty Murray of Washington, the ranking member of the Senate Education Committee. As political counter-programming to Education Secretary Betsy DeVos's appearance before the House Education and Workforce Committee, it didn't get a lot of attention, largely because DeVos managed to beclown herself with a lot of stupid comments about how schools might decide to rat out undocumented kids and their families. But as an issue for the midterm elections and beyond, it's not half-bad!

The idea would be to repeal just one slice of the Republicans' Big Fat Tax Cut -- the portion received by the top one percent of Americans -- and to redirect more than $100 billion in revenue over the next 10 years into two main programs: $50 billion in new spending to increase teacher pay, and another $50 billion to pay for new school infrastructure. Since teacher pay in many states has remained flat since the Great Recession (with inflation causing an actual decrease in spending power), teacher pay and education funding has generated a hell of a lot of support for teachers who've walked off the job to demand states restore school funding, and this proposal is clearly meant to build pro-education sentiment into votes this fall.

Schumer was happy to admit that, with a Republican congressional majority, the proposal isn't likely to go anywhere. And that's precisely the point, especially since Trump and DeVos are pushing for cuts in federal aid to schools:

"I don't think the odds of something like this passing are large in the next couple years," Schumer said. "Our Republican colleagues, so far, have not funded education. They've slashed it. If you look at that budget on education that President Trump submitted, it's a joke. ... The American people realize that teachers are so important and should be paid more. Demonstrations and walkouts around the country got huge support from the American people."

Schumer and Pelosi hope voters might find this a really good reason to elect a Democratic Congress this fall, and a Democratic president in 2020. If voters see teachers and schools benefiting, said Schumer, and in exchange, the "very wealthy would not get such a large tax cut," well then this might not be such a pie in the sky after all: "I think our day is going to come sooner than you think."

The proposal isn't yet terribly specific on which parts of the GOP tax cuts would be rolled back exactly, although as Vox notes, there should be plenty to redistribute. One Percenters, after all, received a whopping 83 percent of the winnings in the GOP tax cut plan, since not only did they get the biggest indivual rate cuts but they were also the biggest winners from the corporate tax cuts and the elimination of both the estate tax and the alternative minimum tax.

Fortunately, the goals are more definite than just paying teachers more and investing in schools. The bill would also earmark additional funding for Title 1 grants to help economically disadvantaged kids, as well as finally meeting the funding goals of the Individuals with Disabilities Education Act (IDEA), which has never actually been fully funded since IDEA was passed in the 1970s:

[The act] calls for the feds to meet up to 40 percent of the excess cost of educating students in special education. Congress has never come close to providing that amount and currently funds about 14 percent of those costs. Fully funding IDEA would mean an additional $21 billion a year, on top of the roughly $13 billion states currently receive.

Imagine that -- fully funding the federal share of special education AND boosting school spending overall? We could certainly live with that, even if we had to retire that wonderful old Molly Ivins line, "They say you can't fix the schools by throwing money at them, but lord knows it's never actually been tried."

Yr Wonkette is supported by reader donations. Please click here to help us keep bringing you these reasons to not lose hope!