Open Thread: Bet You Didn't Know Sci-Fi Movie 'They Live' Is Really About The Jews! 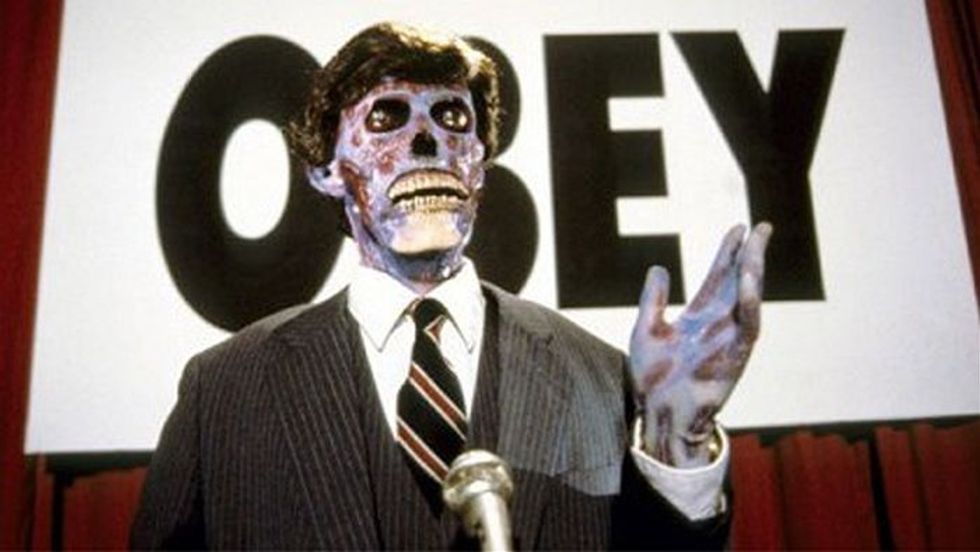 We learn so many fascinating things from whacked out neo-Nazis. Like how the Holocaust was completely faked, for instance, even though the Jews totally deserved it. Or how all of history has been manipulated by a tiny cabal of Jewish financiers (who helped pay to fake the Holocaust, maybe?) And then there's this relatively new idea, that John Carpenter's 1988 science fiction/horror film They Live is actually an allegory about how brave Aryans, enslaved by the International Jewish Conspiracy, can free their minds and fight the power! We'd never heard that one until Carpenter Tweeted about it Wednesday:

Have to say, coming on that out of nowhere, it was a bit of a surprise, but apparently this has been a thing out in clod-cuckoo land for quite a while! And we can see why, because after all, They Live is a tale of an ordinary guy named "John Nada" (GET IT????) played by the late wrassler Rowdy Roddy Piper, who finds out that when he puts on a special pair of sunglasses called "Hoffman lenses" (it's a Jewish name!!!!!!), he can see a reality hidden from our Modern Consumer Society. Advertisements and billboards actually contain subliminal messages like "OBEY," "CONFORM" or "SUBMIT," and a lot of the people we think are human are actually evil aliens intent on dominating earth through mindless consumerism, as if mindless consumerism wasn't bad enough all on its own.

So yeah, that's exactly like how the Jews are secretly running everything. Or every other shadowy cabal that's supposed to be secretly running everything. Our all-time favorite conspiracy theory, we should add, came from the old pre-Internet days when kooks had to leave their photocopied or even mimeographed nuggets of truth on your car's windshield, and it went like this: The Catholic Church has secretly run all of world history, and even published its own plan for world domination as "The Protocols of the Elders of Zion" to blame the Jews for exactly what the Catholics were really doing. The flyer was pretty impressed with the Church's sneaky long-term plan, in which it created communism in the 19th Century, so it could be brought down by a Pope from a communist country in the 1990s. And whoever wrote that flyer didn't even need special glasses to see through the conspiracy.

Needless to say, almost as soon as Carpenter posted his "Knock that shit off" tweet, the Flying Monkey Brigade arrived to tell him he has no idea what his own movie is really about: