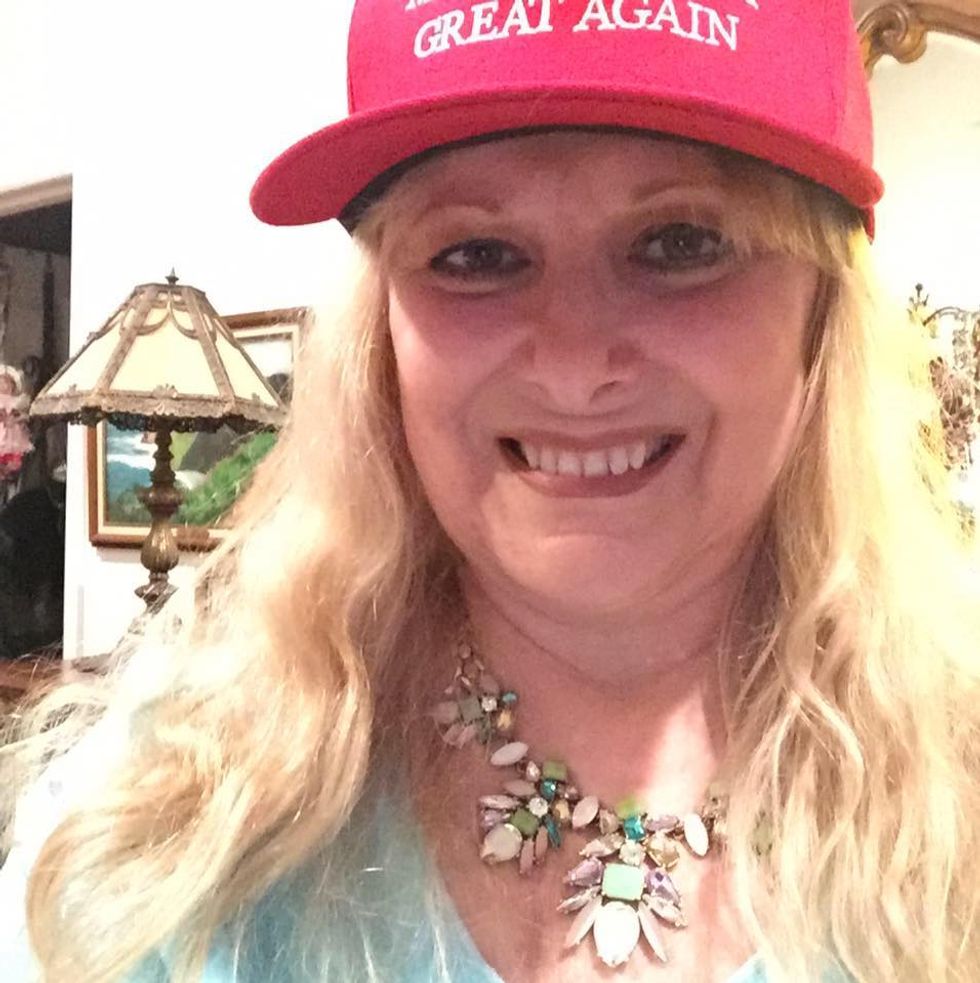 You know, just when you think discrimination just isn't a problem here in post-racial America, you get slapped right in the face with the cold hard reality of just how cruel people can be to others just for being different. Or for being belligerent drunks.

Case in point! Esther Levy of Warwick, New York, claims she and her friend, retired judge Alvin Goldstein, were asked to leave a popular Mexican restaurant on account of her "Make America Great Again" hat and Donald Trump button.

According to Levy, she and her buddy sat down and ordered two sangrias from a smiling waitress. Then, MOMENTS LATER, the co-owner of the restaurant -- whom she says she had never met before, despite claiming to have been a regular there for 15 years and being so super tight with the other owner that he led a conga line on her birthday -- came out and demanded they leave just for loving Trump so much.

“I was shocked,” Levy, a writer, told The Post. “She [the waitress] seemed very surprised by it all and was told to refuse us service. We just got up and started to leave.”

Levy said a man who identified himself as a co-owner blasted Levy and Goldstein for supporting Donald Trump as they left.

“On the way out, the co-owner decided to yell at me and humiliate me,” Levy recalled. “He said, ‘We don’t serve Trump supporters here. Get out of here and never come back.’ ”

Goldstein said he defiantly predicted victory for Trump as he walked out of the restaurant.

“The man told me that Hillary was going to win,” Goldstein said. “I certainly won’t be back there. It was horrific what happened. I’m not used to being thrown out of restaurants.”

HORRIFIC INDEED IF TRUE. Although not really, because honestly it's pretty rude to walk into a Mexican restaurant wearing a Donald Trump hat. It's kinda like saying, "I sure wish you weren't here, but I'd like to eat your food anyway!" Which is not very nice!

Honestly, you'd think people who hate immigrants enough to vote for Donald Trump -- who so often wring their hands in fear of the dilution of their precious American White Person Culture -- wouldn't even want food brought here by immigrants. You'd think they would want to Make America Great Again by only eating food not brought here by immigrants, like cucumber sandwiches on white bread with the crusts cut off, soup served in bowls made of bread, a lot of mayonnaise, Fresca and something called a "tuna noodle casserole." If you don't like immigrants, don't be a hypocrite and eat immigrant food!

The restaurant is saying nothing went down like Esther claims it did, and that she and her friends were asked to leave because they were drunk and being rude to waitstaff.

To the tens of thousands of customers who have supported us over 25 years of business in the Hudson Valley area, we have never, and will never discriminate against anyone based on race, religion, gender, sexual preference or political beliefs. There was an unfortunate situation that was brought to my attention yesterday where claims of discrimination were made by patrons of the restaurant. An employee of ours asked the patrons to leave because they were being rude to the staff and rowdy due to intoxication. I'm personally looking into the facts based on what our staff witnessed and what's been posted here on Facebook. [...]

We've always treated our customers with the utmost respect and dignity — we have always treated them as one of the family. This business is our livelihood; something we've built from the ground up 25 years ago and take these allegations made against us very seriously. Thank you for reading this.

Anyone who's worked in the service industry can tell you it causes you to develop a pretty high tolerance for people being awful. I once had a lady tell me I should go across the street to the grocery store and get her chickpeas for her salad, if I "really cared about customer service at all." Pretty much the only thing that is going to get you kicked out of a restaurant is being a drunk asshole, or like, expecting to be allowed to have a table for several hours and just ordering water. Also, it seems fairly likely there is a strong correlation between being a Trump supporter and being rude to people in the service industry. Don't ask me why, just a feeling I have. Maybe because they get all excited about how Trump is gonna make it so it's socially acceptable to be an inconsiderate asshole?

Esther and several of her supporters -- whom, we are very eager to bet are the same people who believe bakeries shouldn't have to bake cakes for same-sex weddings -- are claiming that kicking her out for being a Trump supporter is illegal, which it actually isn't. Because jerks are not a protected class of people.

Of course, it's a lot more likely that these two -- Levy and Goldstein -- are gonna face discrimination in Trump-lovin' circles than it is at a Mexican restaurant. Though, in that case, probably not for being belligerent assholes. Just saying.

Also, they might want to look into their own genealogy just to make sure that they are not the descendants of "illegal immigrants" their own selves -- which many Jews are. During the biggest wave of Jewish emigration, most people didn't immediately naturalize! In fact, the 1920 census showed that 25% of all immigrants were not Official American Citizens. Not only that, back when America was "Great," it imposed quotas on which kinds of immigrants were gonna be allowed through. And, uh, surprise, there was a pretty strict quota on the Jews. So there is actually a whole history of Jewish people having to sneak into this country! And often through Mexico! Oh, and the country -- back when it was GREAT -- routinely sent ships full of Jewish refugees back to Germany during the Holocaust. Just like Trump wants to ship back the Syrian refugees now!

“This is going on all over the country,” he said. “People need to know that we are not going to stand for it. Enough is enough. We have a right to support him.”

You can not stand for it all you like, but I'm pretty sure that being "discriminated" against for loving Donald Trump is kind of like saying you are being discriminated against for repeatedly insulting people. Which, you know, is not a thing.