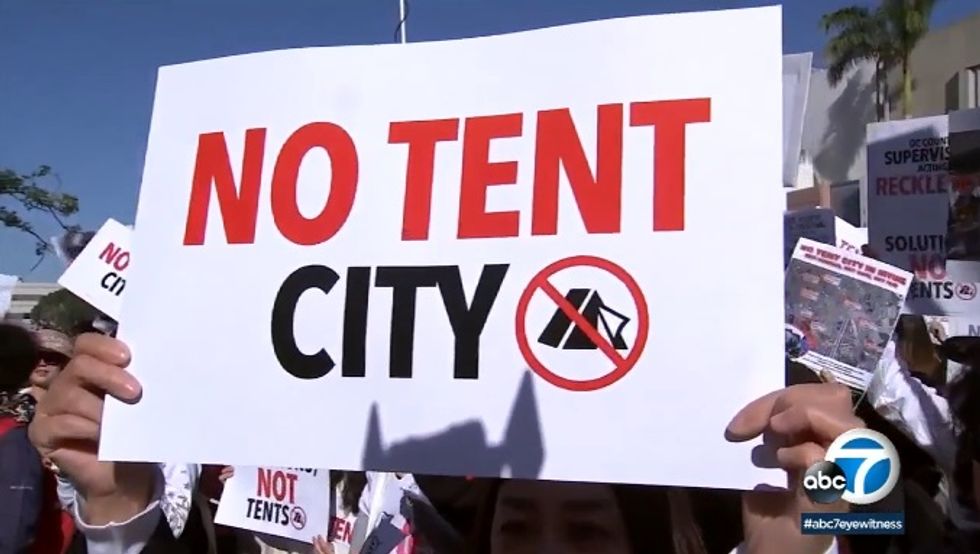 Orange County, California, has a bit of a dilemma: The county has been clearing out (massive, conscience-shocking) homeless encampments on the river, and on the train tracks, and at the federal courthouse. But the county has also failed to set up shelters for the people whose encampments were cleared out, because Jesus H. Christ in a comfortable split-level ranch house, the homeowners of Orange County don't want those people housed anywhere near them, either. Couldn't they just be shipped off somewhere else or disintegrated or something?

In mid-March, the Orange County Board of Supervisors, under threat from Judge David O. Carter, finally approved $70 million for extremely necessary homeless shelters -- a good down payment on what's estimated to be a $100 million need. And then? More than a thousand people showed up at the Board of Supes' next meeting to oppose the emergency shelters, which had been proposed in the cities of Irvine, Huntington Beach and Laguna Niguel. The supervisors promptly about-faced.

Here, enjoy some comments from the nice people who made it very clear that the homeless have to go, but there's no need for the county or their cities to provide anywhere for them to go to:

"Who cares? This is not our responsibility," said Abby Moore, a retiree from Laguna Niguel. "We are not elected to handle this crisis. I just don't want to be near the homeless."

Angela Liu of Irvine said she did not know where the homeless should go. But it should not be in her city, she said.

"They need to put them somewhere, maybe somewhere else in California," said Liu, who owns a legal services company. "I really don't know where they can go. But Irvine is beautiful and we don't want it to get destroyed."

Maybe just ship them out to the desert and tell them good luck. But be sure to bill them for the bus ride and then jail them if they don't pay.

Congresslout Dana Rohrabacher Missed Getting On 'Hoarders' By *This* Much

Congressman and all-around lout Dana Rohrabacher, who lives in filth (and yes, there are pictures of his trashed rental house to prove it), was perfectly disgusted at "the spectacle of county-financed homeless compounds setting up shop in our local communities." And he has a really good reason for opposing any assistance at all to homeless people: It would be bad for the homeless, he explained in a statement.

I join the outrage that we are assuming responsibility for homeless people, taking care of their basic needs and elongating their agony by removing the necessity to make fundamental decisions about the way they live their lives[.]

Yup. He actually said that helping people with their basic needs "elongates their agony." Far better to destroy their tents, burn their belongings, and force them to makes some fundamental decisions about how they're going to live. Or perhaps whether. They certainly should have the option of hurrying up and dying, to reduce the surplus population. That has a certain ring to it, might go well in a book of some sort.

Are there no workhouses? No? Well there's your solution.

As for the people who've already been cleared out of camps along the Santa Ana River Trail, their temporary vouchers for motels and other short-term housing are running out, and the existing emergency shelters in the OC are already full. Monday, a meeting of the Board of Supervisors to discuss the impending crisis was attended by only two supervisors, chair Andrew Do and Vice Chair Shawn Nelson -- the other three supervisors failed to show up, so with no quorum, no action could be taken.

"I just need cities to come up with alternatives for us to choose from. If it helps us to accomplish our purpose - I'm for it," Do said.

Nelson was doubtful that cities that have opposed emergency shelters would take any action on their own, and pointed out that voters tend to take revenge on any elected officials who try to put forward plans to house the homeless:

“Anybody that wants to stick their neck out for this issue is gonna have nothing to show for it but a cut-off head,” said Nelson. “There’s no reward for even trying to get involved in this.”

As an example, he pointed to Supervisor Lisa Bartlett, who voted to explore putting shelters in three cities. “Lisa stuck her neck out and made a tough vote. She came within an inch of getting recalled. Why? Because she just acknowledges there’s a problem, and wants to participate in the discussion. And the response is ‘how dare you?’ ” Nelson said.

Ultimately, the gridlock between the cities and the county may leave a final decision up to federal judge David O. Carter, who will hold a hearing hearing today with lawyers and city officials from several OC municipalities. Carter is presiding over several federal lawsuits meant to address the county's homeless problem. Since none of the elected officials have been able to work out a solution, it looks like everyone has decided to throw their hands up and leave it to Carter. Fortunately, he seems quite intent on not letting local governments ignore the problem.

Then all the political officials can complain about the burdens imposed on them by unelected judges with lifetime appointments. And the homeless? Maybe they'll find shelter. Maybe they'll be converted into dog food. We live in interesting times.

Yr Wonkette is supported by reader donations. Please click here to send us some money. If you can afford it.