Orly Taitz Orders Prosecution of Everyone Who Disagrees With Her 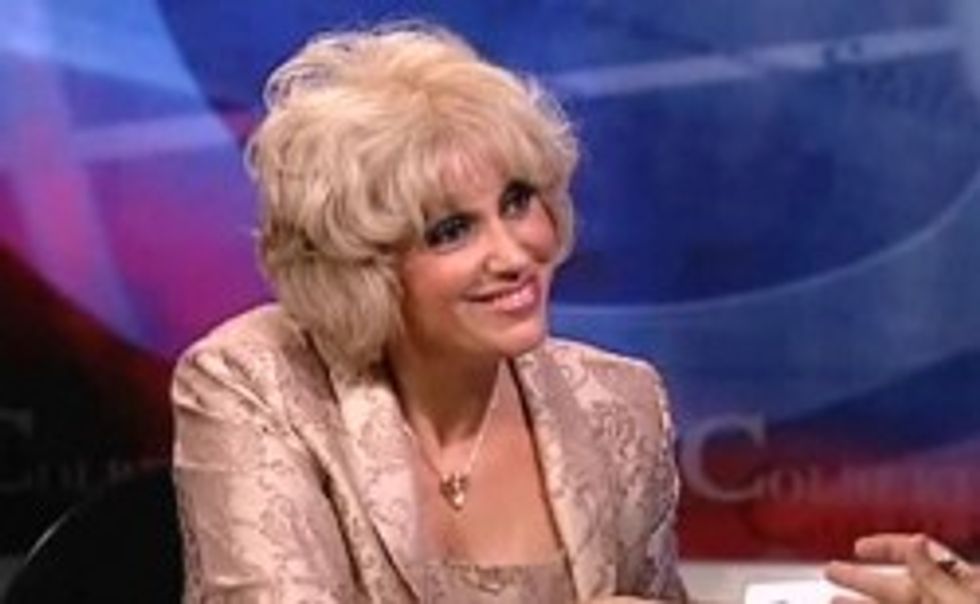 In a shocking turn of events, the birther trial in Georgia of which Orly Taitz tries to be a part despite the fact that she can't practice law in Georgia (and probably anywhere else) has ruled in favor of sanity i.e. Obama! Which means that Taitz, who evidently steals bedspreads from Las Vegas hotels and fashions them into suits, has now ordered an "emergency appeal," which is the kind of thing that Actual Lawyers use when their client is about to be put to death, etc. But for Orly Taitz one Georgia citizen's loss of a trial to prove Obama is a heathen from abroad is AKIN TO DEATH, so, writing in five different fonts, including underrated favorite of seventh-grade history presentations, StageCoach, and using, variously, all-caps, bold and underline to convey her point, Taitz has ordered for the criminal investigation of the presiding judge in the case, Michael Malihi, and Obama's lawyers, and of course Obama, as well as, probably, the court typist, the courtroom attendants, and that one elderly lady who was drinking from the water fountain outside the courtroom when the trial let out.

Judging by the fact that between zero and one news outlets even covered the Farrar v. Obama ruling, really the only noteworthy thing about this is Orly Taitz's ability to make a really strong case for herself as a lawyer by insulting a judge and otherwise throwing a tantrum in broken legalese. Some excerpts from the "official" appeal:

This behavior of judge Malihi was so outrageous, that not only his advisory opinion needs to be set aside, as not grounded in any fact or law, but state and county grand juries and the Attorney General of Georgia need to launch a criminal investigation into actions of judge Malihi and possible direct or indirect undue influence by Obama. Decision by Malihi reads, as if it was entirely written by Obama's personal attorneys Robert Bauer and Judith Corley of Perkins Coie and rubber stamped by Malihi. It is noteworthy, that both Robert Bauer and Judith Corley need to be criminally investigated as well, as both of them were complicit in aiding and abetting Obama in presenting to the public on April 27, 2011 a computer generated forgery and claiming it to be a true and correct copy of Obama's birth certificate.

Malihi, national hero, actually said in his decision that he normally rules for the plaintiff when the defendant fails to show up in court, but he ruled in favor of Obama, even though Obama didn't show up, because, well, the plaintiff's case was a jooo-ooooo-ooooke:

The Court finds the testimony of the witnesses, as well as the exhibits tendered, to be of little, if any, probative value, and thus wholly insufficient to support Plaintiffs' allegations.

Taitz in the end calls for the "criminal prosecution" of Obama and all his "accomplices," which apparently is the term for someone who actually knows how to draw up a normal-looking legal document.

Some other gems from the appeal:

Also, of course, Taitz has taken to her blog to utter profound musings such as this one:

DOES ANYONE KNOW, WHAT IS MALIHI’S MIDDLE NAME? I SAW MICHAEL M. MALIHI. WHAT DOES M STAND FOR?