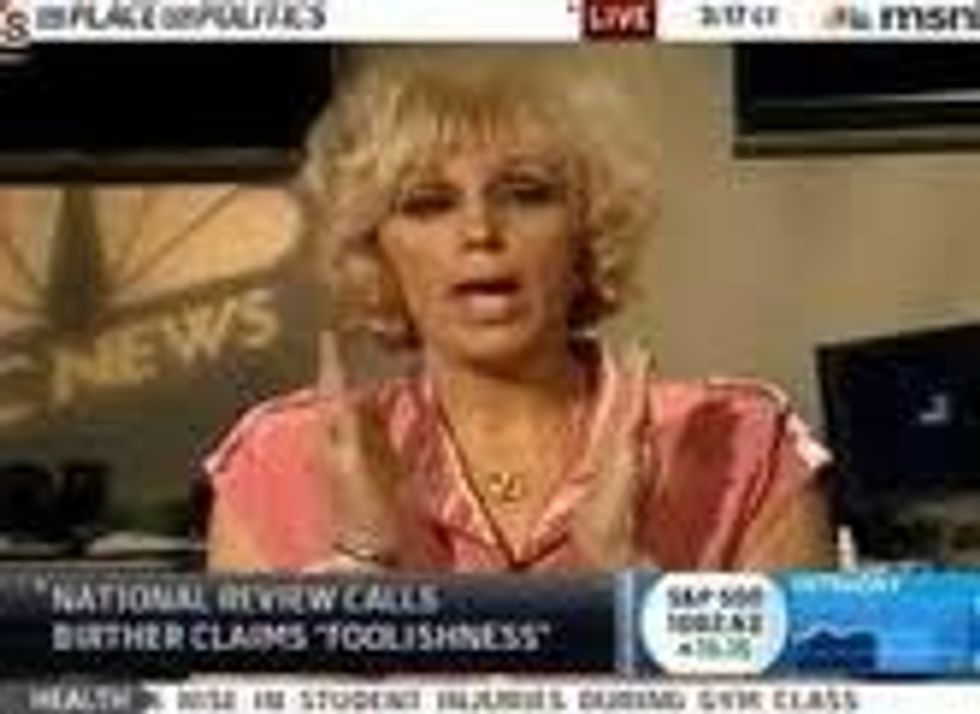 What, huh? Did you have trouble parsing that headline? It didn't really make much sense, right? But have you considered that the problem might not be the headline, which is doing the best it can, bless its little anthropomorphized headline heart, but the story it is trying to explain? The story stars one Orly Taitz, after all -- a woman who contains multitudes as she is a lawyer, dentist, future US senator from theworld's worst state, California, and probably some other stuff we forget.

So what's up, Orles? How are you clogging up the court system today?

She continues to argue that [Damon] Dunn, a former National Football League player who defeated her for the [Republican nomination for Secretary of State in 2010] and ultimately lost to Democrat Debra Bowen, shouldn't have been allowed to run as a Republican because years earlier in other states he'd registered as a Democrat.

Of course she does. So she has been suing him for election fraud plus reimbursement for all the $40,000 she spent on her campaign. (Plus punitive damages, of course, which should be outlawed when a drunk doctor kills your baby but are awesome when someone breaks the laws that Orly Taitz made up in her head.)

Let us read some of the decision by the California court of appeals pointing and laughing in Ms. Taitz's face!

First, they point out about 147 things that were wrong with Taitz's filing, in order, like they cannot even believe it. (And they probably cannot believe it, because how was this lady admitted to the bar? Confused face!) Then they get to the part we wanna know about, which is why the fuck Orly Taitz thinks that having been registered as a Democrat once makes someone ineligible to run as a Republican? Yeah, Ms. Taitz doesn't really answer that?

We have carefully reviewed Taitz's complaint and the record. Her fraud claim is based on the assumption Dunn knew he was ineligible to run as a Republican candidate and therefore misrepresented his eligibility status by declaring his candidacy. The alleged misrepresentations are all premised on Dunn's alleged intentional failure to disclose some information on his California voter registration card. Specifically, Taitz asserts Dunn failed to disclose prior expired voter registrations in Texas and Florida.

However, Taitz provided no authority to support the premise of her argument. She failed to cite any legal authority holding Dunn's failure to disclose past registrations on his California voter registration card rendered him ineligible to run as Republican candidate. Indeed, she provided no legal basis to explain why Dunn's voter registration card had any relevancy to his eligibility as a candidate. As such, there is no reason to assume Dunn knew he was allegedly ineligible to run as a Republican candidate, i.e., he made no misrepresentation.

Oh well, guess it's back to doing an awesome job suing the president. [OCWeekly/Leagle]