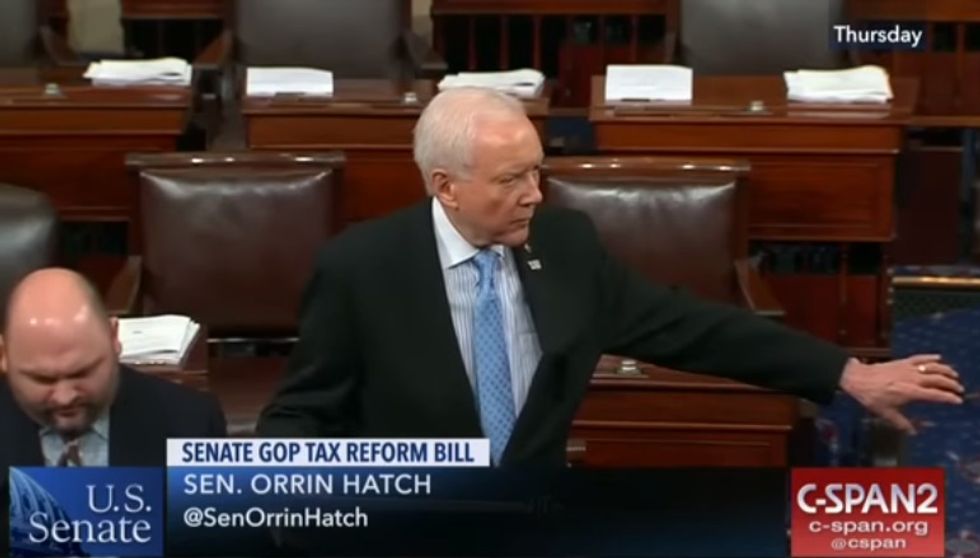 Why don't we have any money? It's a mystery. Now let's cut taxes on the rich, OK?

While preparing to vote on a $1.5 trillion tax cut that mostly goes to the wealthy and corporations, Utah Republican Senator Orrin Hatch also addressed Congress's failure -- more than two months ago! -- to reauthorize the Children's Health Insurance Program, which Hatch co-sponsored in the 1990s. Sure, CHIP is very important and worthwhile, he explained, and maybe America can somehow find a way to pay for it, but first, he absolutely had to help pass a gigantic tax cut for the rich. Also, he wondered, do the poor really need help, seeing as how they're mostly lazy?

The cruellest thing you can do is point out to Republicans the real effects of their tax policies.

During Thursday night's debate on the tax bill, Hatch was pressed -- again! -- by Ohio Democrat Sherrod Brown to commit to reauthorizing CHIP, which expired at the end of September. Hatch insisted he really is committed to CHIP, oh heavens, yes of course: "Nobody believes more in the CHIP program than I, I invented it -- I was the one who wrote it. [Ted] Kennedy came over and became the one who helped put it through." But then Hatch went off on a tear about why reauthorizing CHIP is hard, what with money being short and all, for some reason:

Let me tell you something, we’ll do CHIP, there is no question about it in my mind. It's got to be done the right way. But the reason CHIP's having trouble is we don’t have any money any more. Just to add more and more spending. You look at the rest of the bill for more and more spending. I happen to think CHIP has done a terrific job for people who really needed the help. I have taken the position around here for my whole senate service, I believe in helping those who cannot help themselves, but would if they could.

See? Hatch really cares! At least about the good poor people, the ones with children who deserve healthcare. The problem is, that's only a certain portion of the poor, and man oh man is Hatch angry that lots of the poor are just useless takers like they've always been in the prehistoric hindbrain of Republicans going back to the Great Depression:

I have a rough time wanting to spend billions and billions and trillions of dollars to help people who won’t help themselves. Won’t lift a finger. And expect the federal government to do everything.

Unfortunately the liberal philosophy, created millions of people that way. Believe everything they are or ever hope to be depend on the federal government rather than the opportunities that this great country grants them. I've got to say it, I think it’s pretty hard to argue against these comments. Because if you look it over, for decades now, we have been spending more than we have, fielding more and more federal programs, some of which are lousy. Some of which are well-intended. And some of which are actually good like the CHIP program. We’re going to get CHIP through. There is no question about this.

Brown, the advocate for the useless eaters, noted that more and more states will soon be sending warnings to parents that their kids' healthcare may vanish once the state funding runs out. Hatch faintly praised Brown for his concern for CHIP parents, then reminded Brown that there are more people in America than just those people: "I like my friend from Ohio. He's sincere, he's dedicated, he's liberal and well-meaning. But I'd like to see him be concerned about everybody else."

MSNBC host Joe Scarborough had thoughts on the exchange, and they were surprisingly clear thoughts:

Also happy to play a cartoon version of a Republican was Iowa Senator Chuck Grassley, who explained over the weekend that we absolutely must eliminate the estate tax so as to reward people who invest their money wisely. And if not everyone builds up an estate of $5.5 million ($11 million for couples) to qualify for the estate tax in the first place, well, there's a simple answer, the alleged human being explained:

I think not having the estate tax recognizes the people that are investing [...] As opposed to those that are just spending every darn penny they have, whether it’s on booze or women or movies.

We had no idea it was so easy! Smartasses on the Twitter box openly mocked Grassley's downhome prairie common sense, like a bunch of jerks:

and don't get him started on the taxi dancers.

"TWENTY FIVE CENTS A DANCE? THEsE HOOligANS COULD BE SAVING EigHT BITS A WeEK!"

But we looked at our own finances, and realized that if we cut out moviegoing, including Netflix and concessions the few times a year when we go to a theater, we could save a good $300 a year, maybe more! Cutting out booze would be hard, but we bet we could do that, too, and Expert Political Pundit Our Girlfriend is already pretty low-maintenance -- do I even need to get her a get-well card just because she's having surgery tomorrow? (She'll be fine!) So if we add it all up, plus some other frivolities we could do without, let's assume we could save $4000 a year, getting us to that $5.5 million in a speedy 1,375 years! Oh, but with the interest on really smart investments, we bet we could manage it in 500-700 years, tops.

Of course, it won't be easy to give up booze with assholes like Grassley and Hatch out there.

Yr Wonkette is supported by reader donations. Please click here to help us -- no way are we gonna pay that estate tax!