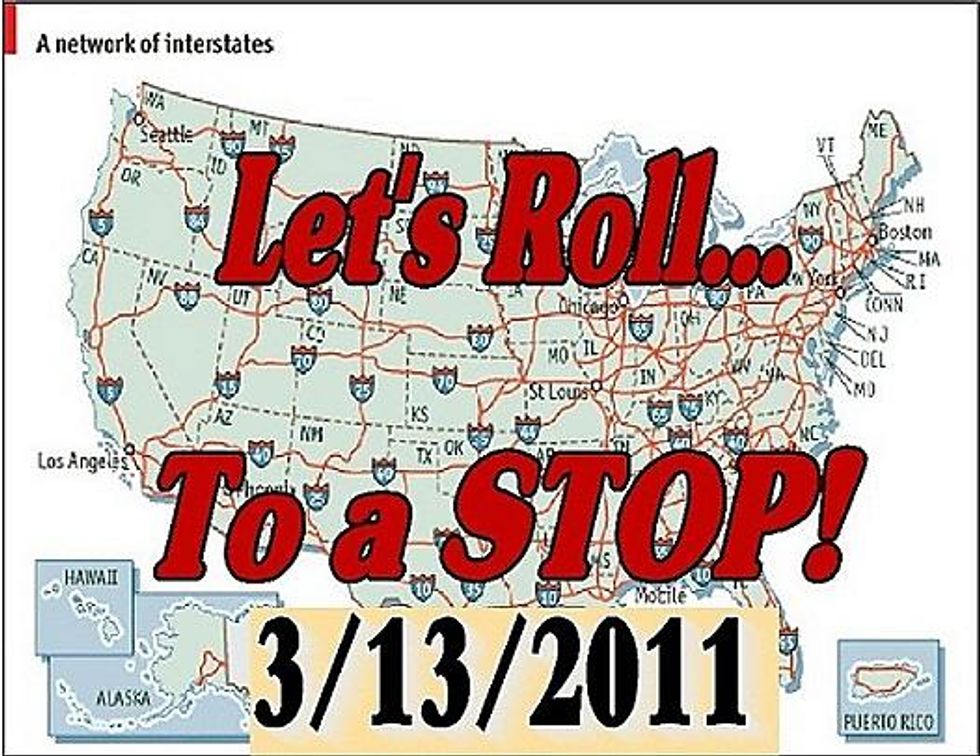 Personality cultists have such an abiding faith in their messenger that they're certaineveryone will accept this cult figure if only everyone could hear the message more often. And that brings us to the Palin-worshiping conservative group Stand Up America, which just wants all Americans not otherwise occupied with a job or kids or whatever to drive to their "nearest highway or main route" on March 13 at 4 p.m. Eastern time and then pull off to the side of the road, presumably causing all kinds of traffic jams and car accidents. Why? "Sarah Palin called the Obama Administration’s actions the 'Road to Ruin'!" Okay, yeah, that sentence tells this group what it should do, on the highway.

What it will be is FUN, and a great way to vent your frustration, without being labeled, or maligned!

• Imagine others driving by wondering “what the heck”? Wave to everyone;

• Get ten friends to do the same; or go to an over pass and hang temporary signs saying – “Time to stop!” Just imagine the imagery! But be SAFE!

• Once pulled over to the side, place calls or texts to your friends, take pictures, send tweets, flood Facebook with messages and photos, along with several million others on other highways across the land.

• Stay one hour if you can, get your friends to do the same, line up all your vehicles in a safe manner as far off the side as you can, and hit your horns.

• One hour gives the media a chance to react, a chance to get footage. Imagine the traffic reports!

• Hang a sign inside your back window, or use temporary soap to write a message safely on the window;

• Be a part of millions of people saying: “Stop the madness, we are pulling over and just stopping!”

THAT FUCKING KENYAN MADE ME PULL OVER MY TRACTOR THAT I DROVE ON THE ROAD SO I COULD PULL OVER!

Helicopters recording the event, YouTube filling with videos from every spot in America, with one message: “Just Stop”! Imagine seeing 300 cars pulled over for miles in California, in Texas, in New Jersey…etc.

Imagine the evening news and cable stations saying, “What the heck is going on?”

Do the math. If a car is 17 feet long, and 10 feet is maintained between each vehicle, it takes only 195 cars to stretch one mile. Imagine 500 tractor trailers pulling over for one hour! That’s over seven miles!

Haha, yes, do the math. And realize even a million vehicles spread sparsely throughout the roadsides of America wouldn't create a disturbance, because the highways are already littered with broken-down old minivans and abandoned Hummers.

But hopefully their impossible dream will come true. Which would mean motorists on the freeway having car trouble wouldn't have a single spot to pull over safely to the shoulder, which will cause millions of fatal car wrecks across the country along with endless standstill traffic jams everywhere else. Yeah, that will bring attention to some meaningless throwaway ghostwriter line Sarah Palin once uttered.

The ozone will be pleased. [Stand Up America via Wonkette operative "Will Sommer"]