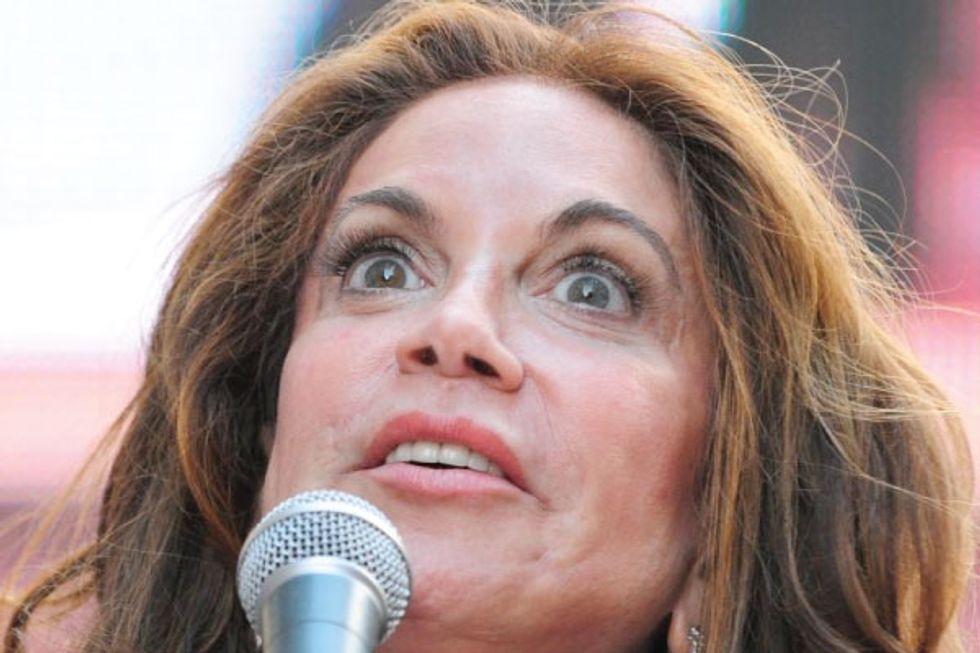 Pamela Gellar, a very reasonable and normal human being who totally does not make stuff up, is very concerned about the future of the freedom of the press. Especially since she read an email sent out by the Hillary Clinton campaign, revealing Hillary Clinton's plans to shut down Breitbart.com, where she writes most of her drivel. She shared her concerns on Wednesday in an interview with St. Louis radio host Jamie Allman.

Though she started out talking about how upset she was with John Kerry suggesting that terrorism should be covered less in the media, she soon addressed the real threat to freedom of the press that is Hillary Clinton and her desire to establish The Sharia in the United States.

“And partner this,” she added, “with last week’s declaration in an email from Hillary Clinton that she’s going to shut down, for example, the number one conservative website, Breitbart, which as you know I write for, I mean, this is the Sharia, this is totalitarianism, this is very frightening. And what’s even more frightening is that the media’s not talking about it because they’re marching in lockstep, Jamie.”

Now, we've had a conservative media in this country for a while. I don't always like what they have to say, but I respect their role and their right to exist.

Breitbart is something different. They make Fox News look like a Democratic Party pamphlet. They're a different breed altogether -- not just conservative but radical, bigoted, anti-Muslim, anti-Semitic conspiracy peddlers who never have been and never should be anywhere near the levers of power in this country.

Pamela Geller Is Suing The Facebook For Loving Muslims Too Much

But Donald Trump just gave them a broad new mandate to shape his campaign, his message, the future of the Republican Party, and quite possibly the country.

Wow! Can you even believe that? It's all right there, in brilliant technicolor vision! Hillary Clinton plans to shut down Breitbart.com! And she's not even going to do it the way decent, upstanding Americans shut down websites they don't like, by investing in litigation against them, but by establishing The Sharia law in the United States! Just like all the Methodists want to do! And that will be a very sad day for anyone who loves freedom of the press and also bacon.

Of course, if Donald Trump gets elected President and is able to "open up the libel laws" and remove the "actual malice" standard -- which would require finding some way to nullify the 1964 New York Times Co. vs. Sullivan decision -- Pamela's career would be 100 percent safe. By removing that standard, anyone who says something false about a public figure in a way that defames them could be successfully sued for lots and lots of money, whether or not they know they are wrong! Given that Pamela Geller tells only the absolute truth -- like she just did about that email -- she would not have to worry at all.