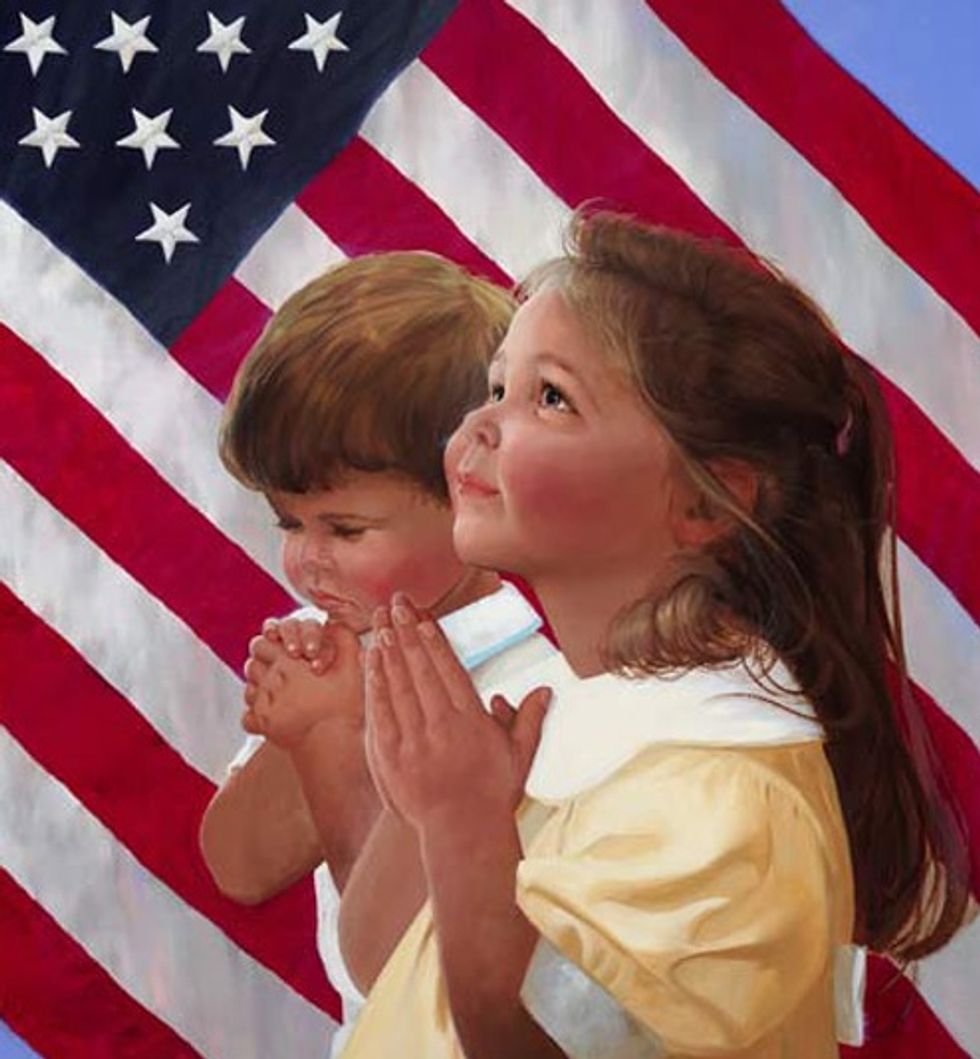 You might recall the story of Gabriella Perez, the poor little kindergarten kid who was told by a mean lunch lady that shewasn't allowed to pray in the cafeteria and that praying is "not good." It's just another story of how Christians in America have no rights anymore, according to Fox's Todd Starnes, who sees oppression everywhere in this great land where the majority is oppressed. Starnes has even written a book about it, which we will review real soon. Also, we're pretty sure that it is only a complete coincidence that little Gabriella's father, Marcos Perez, just happens to be the vice president of sales for the publisher of Starnes's book. It's just one of those wossname, serin derpy things. So anyway, since the school keeps saying that they've talked to everyone who could have been on lunchroom duty that week and found “zero evidence an incident ever occurred,” Perez and the rightwing legal firm The Liberty Institute are going to sue the school for oppression and general badness.

Here is the video of Gabriella spontaneously telling her parents exactly what happened, without any prompting, coaching, or leading questions (apart from a gentle reminder to not “talk like a baby -- talk normal”):

Now, the school insists that it found no evidence that a single bit of this actually happened. In fact, said district spokesman Mike Lawrence, the school's investigation determined that the person who the girl identified as the guilty teacher -- by pointing at a photo on the school's website -- could not have been "anywhere near the lunchroom" used by kindergarten and first-grade students.

After a couple more days, though, Dys and the Perezes changed their mind, because they decided that the school had never really investigated Gabriella's very serious (and completely uncoached) charges. Apparently they were not pleased that the school apologized but also said that their investigation found that the event never happened, which means that school was actually calling Mr. Perez a liar, and so it is time to sue everyone:

Two days after stating that Gabriella Perez's family had accepted the apology, lawyer Jeremy Dys said their position changed after reading the comments of district spokesman Michael Lawrence in the Orlando Sentinel.

Dys said it is clear now the district's response wasn't "a real apology." In addition, "we're not really confident the investigation actually took place," he said ...

He sent a letter to Seminole schools on Friday requesting video footage from the school, emails to or about the family and phone logs relating to the case, including documentation of harassing or negative phone calls.

We're betting that there will probably be plenty of recordings of harassing phone calls to the school, since that's one thing that Todd Starnes and the Butthurt Christian Brigade are really good at generating.