Pastor Remembers That Time He Punched Jesus Right Into A Kid 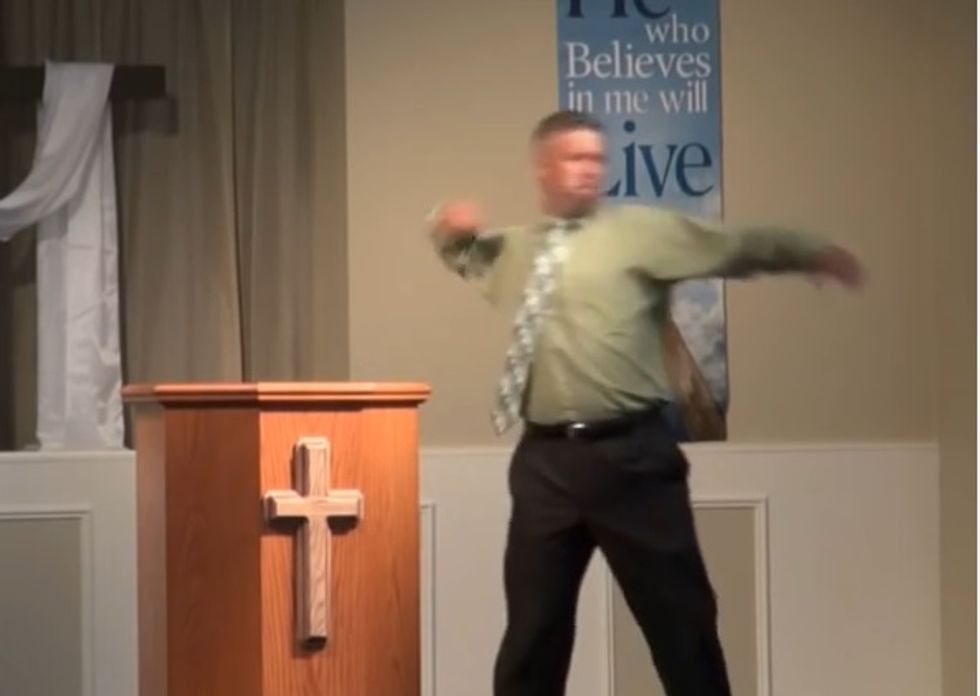 Pastor Eric Dammann has an inspirational story about the time he punched a smart-aleck kid right in the chest, bringing him to the Lord. You know, like when Jesus said, "Let your left hand not know what your right hook is doing."

In an excerpt from a recent sermon at the Bible Baptist Church in Hasbrouck Heights, New Jersey, Dammann told the story of his encounter with "Ben," a young man at a church where Dammann served as youth pastor for a number of years (RawStory has this happening in "Calgary" up in Canada-land, but our guess is that it's Calvary Baptist Church in Warwick, NY). Ben was a bit of a troublemaker, says Damann: "a nice kid, but one of those kids that was always just... he was a real smart aleck. He was a bright kid, which didn’t help things; made him more dangerous.”

Those smart-alecks are especially dangerous when they're smart smart-alecks, all right. And then the miracle! One day at an outdoor youth group, Ben went just a little too far for the peaceable Man of God:

He was just trying to push my buttons. He was just kind of not taking the Lord serious [sic].

And I walked over to him and I went BAM! Punched him in the chest as hard as I could. I crumpled the kid. I just crumpled him.

Then I leaned over and said, "Ben, when are you going to stop playing games with God?" I led that man to the Lord right there. There's times that that might be needed.

And that's how you bring people to Jesus: by punching them in the chest as hard as you can. Can't see how anyone could object. Heaven knows Man O'God and  international hurricane helmsman Pat Robertson is fine with beating the secularism out of smartass kids.

Now, we have to add that we're entirely open to the possibility that poor Pastor Dammann is getting the Shirley Sherrod treatment here -- maybe right after "There's times that that might be needed," he followed it with "Or some people might say. But I learned that day that punching kids for Jesus is wrong." The full video of the sermon had been online at the church's Vimeo page, but it's been removed, so it's anybody's guess whether "context" would help him seem less monstrous, or if Dammann then went on and suggested waterboarding for especially resistant smart-alecks. Or who knows, maybe he killed the kid, and that got him to the Lord extra-quick.

Bible Baptist appears to be in social media damage control mode; in addition to pulling the video, their Facebook page has gone dark as well, and Dammann isn't talking to reporters. Our favorite comment on the story so far is from "Mike79" at Glenn Beck's Home For Timorous Angerbears, who patiently explains that the story's probably fake or taken out of context, because if it were real, the left-run media would have covered it exhaustively or the kid's parents would have sued because that's just how sad the world we live in has become. And besides, adds "Mike79":

IF this guy punched a kid in the chest, maybe it’s actually what the kid needed, and maybe it actually DID change the kid for the better. Some kids really DO need a good arse-whooping in order to get straight.

It's fake and misleadingly edited, just another excuse for the lefty media to make Christians look bad, and besides, the kid was probably asking for it anyway. Gotcha.