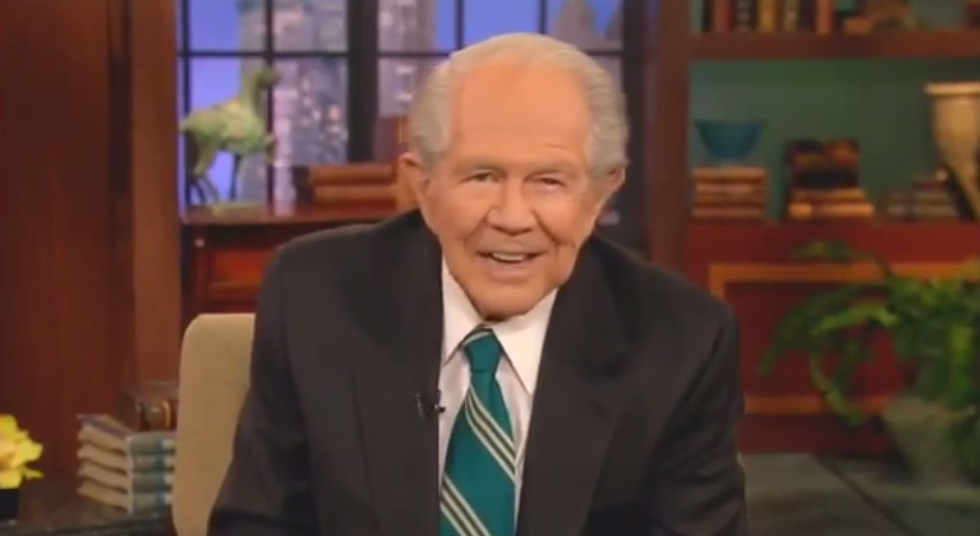 Televangelist huckster Pat Robertson is an expert on sin. In Robertson's special-just-for-him version of the Bible, basically everything is a sin. Like wives who don't put out -- they are tools of the devil, and you should divorce them immediately. Sweaters from Goodwill? Yeah, those could be possessed by demonic demons, so buy retail if you want to stay right with God. Girl-on-girl movies? Sinful for sure, and they will turn your sweet little opposite-sex cheerleader into a raging bulldyke, obviously. And adopting orphans, who are icky, and whom you should definitely keep your distance from because they may have been abused and could be all messed up in the head. Actually, that's not a sin, just a very bad idea, because you don't know where they've been.

But good news, heathens, here's the one thing you can do that is A-OK with the Almighty: driving real fast.

On his teevee show The 700 Club, one of Pat's faithful followers who refuses to take his advice to stay away from "scamsters in religious garb," called to ask this very important question:

Pat, is it a sin to constantly drive over the speed limit? My husband insists on speeding even when he’s on time. In the last two years, he’s gotten four speeding tickets and our insurance has gone up. He doesn’t feel that God cares if we speed. What do you think?

You'd think Robertson would tell this caller that of course driving fast is a sin. You're breaking the law, you're endangering others -- and where in the Bible does Jesus say "Thou shouldst totes own a sports car, preferably red"? Nowhere! Now give your hubby a hummer, Nora, and make him slow down, or else hell awaits.

But no! Turns out Pat Robertson is quite the fan of zoom-zooming himself in his Bible-sanctioned Corvette. So, coincidentally, God's fine with that. Pat shares a fond memory of his own definitely-not-sinful speeding:

There was one night up in the mountains when there wasn’t anybody around, a four-lane highway, late at night, and I did get that little bug up a little over 200 miles an hour.

Pat’s obedient sidekick has the audacity to challenge his 200 mph claim, the whore!, for which he apologizes because it was a mere 100 mph. Which is still fine because he was alone on the highway late at night, you see, and there's nothing in the Scripture forbidding that.

There is an exception to his "Sure, drive however fast you want, who cares? Not God!" parable.

Is it a sin? I think it’s a sin to hurt somebody. I think it’s a sin to drive recklessly. I’ve seen these clowns storming around the midst of heavy traffic. When I drive in the city, I drive very slowly. My wife’s always saying, “Hey, go faster.” But I’m just taking it easy because there’s so many things going on.

I think it’s a sin to hurt people. And if your driving imperils other people, you are sinning. There’s no question about that. But in an open stretch of road, you go to Texas, I think some areas, there’s no speed limit at all! […]

The whole idea of traffic is, it is not sin or not sin — it is to regulate the flow of traffic to keep people from hurting each other. […]

So you ask me a question, and my answer to that question is, don’t imperil anybody else with the way you drive a car and be careful because you want to help other people live and not wind up in the hospital. Period.

But as long as you're not being reckless, whatever that means, sin really has nothing to do with it. But do keep away from those racing gloves from Goodwill. Those will still get you in trouble with the big traffic cop in the sky.

Oh, yes, there's another thing that, weirdly, is not a sin in Pat's world: Being transsexual. He's surprisingly cool with that. Or maybe he just thought that question was about speeding in a Trans Am.