Pat Robertson: Jesus Wants You To Invest In Oil, Not Abortion Pills 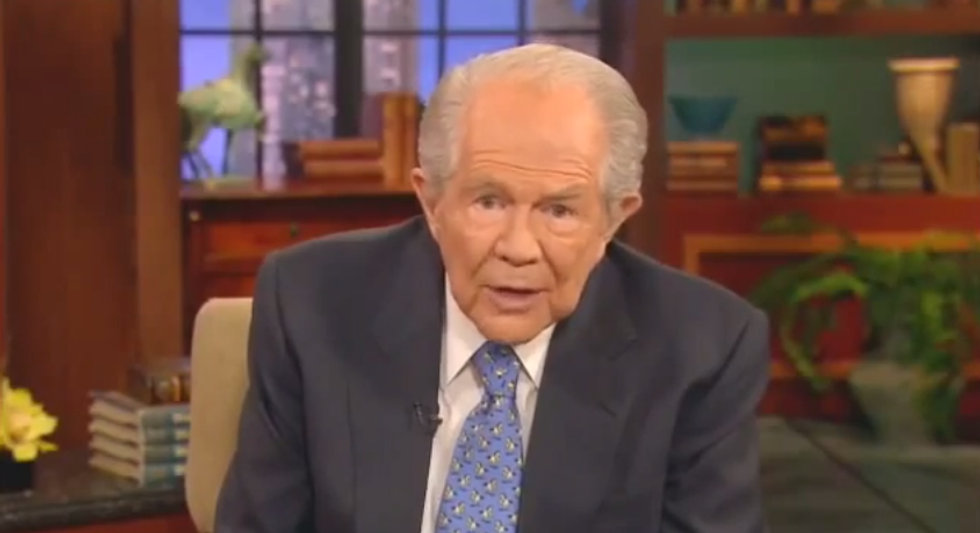 So let's say you find some extra coin under the sofa cushion, and you're thinking, "I should invest this and become a billionaire!" Good plan, you, because that's how it works in America, as long as you're wearing the right bootstraps. So whom should you call for investment advice? Why, televangelist scam artist and all-around scumsucker Pat Robertson!

On Pat's show, the 700 Club, he took a question from "John," who wants to get rich quick, just like Jesus, but he wants to make sure when he plays ye olde stock market, he isn't profiting by "unbiblical means, such as the company that makes the abortion pill." Can Pat Robertson tell him how to invest in the right kind of Bible-approved mutual funds, pretty please and amen?

Right now, they’ve gone down a bit in value, in price, and there’s a tremendous good entry point right now, what are called master limited partnerships, and they are not flowing condoms through pipelines. So don’t worry about the fact they’re giving abortion pills. They’re putting out oil and gas through pipelines. But they give you a guaranteed stream of income, every month, or every quarter — whenever they pay them out. But it’s 7 percent, 6 percent, 10 percent — I mean, there’s some pretty good ones. Master limited partnerships. Look at the record of what they do. I think that, to me, people always say, ‘What is a safe investment?’ In my opinion, that is the best investment that is available for the average person today. They’re utilities, and they’re handling something that everybody wants: oil and gas.

We are a little disappointed that Pat did not advise John of the great investment opportunity known as "Operation Blessing International." What's that? You don't remember the "charity" Pat started after the Rwanda genocide to cash in on the suffering of the refugees who'd survived -- except the whole thing may have been a scam for Robertson to make some blood diamonds money? No, that would be ridiculous! Besides, the Virginia attorney general investigated those claims and said Robertson did nothing wrong whatsoever, and that exonerating report probably had nothing at all to do with the money Robertson donated to him. Total coincidence.

Hey, what does the Bible say about blood diamonds? And oil? And gas? And scamming others? Probably nothing. It's full of admonishments about The Gay and The Sex and The Sluts and The Shellfish (which does't count anymore because bacon-wrapped shrimp is that delicious, so obviously God was joking about that one). And while the Bible clearly states thou shalt not profit from that one company that makes The Abortion Pill -- even though America's most righteous company, Hobby Lobby, profits from that one company that makes The Abortion Pill, and that seems to be okey-dokey no problem -- there is definitely nothing in there about doing business with oil companies, which are good and holy and most definitely biblical.

We'd almost feel sorry for this John fellow for whatever might happen to his extra coinage if he follows the very sound investment advice of Pat Robertson, except that, well, like Jesus said, only rich men get into heaven. So go forth and profit, John, by investing in gas and oil today!