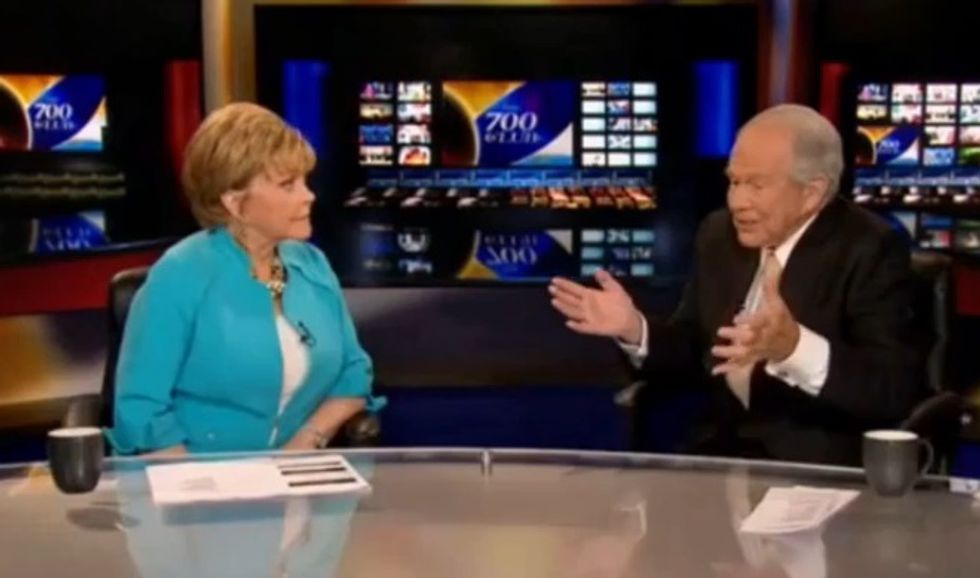 ISIS is a bunch of unstoppable murderous thugs trying to drag the Middle East into a New Medieval Order, and Pat Robertsoncouldn't be more tickled by the prospect. You see, children, Brother Pat is excited by their goal of unifying Iraq, Syria, and chunks of Egypt into a radical Islamist caliphate, because he's pretty sure that would fulfill a prophecy from Isaiah 19:

23 In that day there will be a highway from Egypt to Assyria. The Assyrians will go to Egypt and the Egyptians to Assyria. The Egyptians and Assyrians will worship together. 24 In that day Israel will be the third, along with Egypt and Assyria, a blessing on the earth. 25 The Lord Almighty will bless them, saying, “Blessed be Egypt my people, Assyria my handiwork, and Israel my inheritance.”

And by golly, doesn't that just sound a heck of a lot like what's happening right now? No? Well you just don't know prophecy the way Pat Robertson does. Here, let Pat Biblesplain it for you: While Assyria no longer exists, and its peoples were scattered to the winds (Yossarian was the last know Assyrian), Pat Robertson sees no reason why it can't be stitched back together to help God bring about the End Times. And if it has to be brought back into existence by a weird bunch of Islamist rednecks who've spent the last five years in the desert eating bark, bugs, lizards and leaves and imbibing pure Salaafist interpretations of the Koran, then that's fine. After all, the prophecy says that they'll turn to the LORD, and once ISIS reunifies all those territories, the international community could swoop in with some helicopters and bring them together, since they'd "play nice" with everyone (this should be all you need to see to know that Pat Robertson knows nothing about the Kurds, who are kind of into the fierce self-determination thing). But that's Pat's plan:

That's quite a prophecy! And all that has to happen before that is for the LORD to send some bigtime suffering to Egypt:

4 I will hand the Egyptians over

to the power of a cruel master,

and a fierce king will rule over them,”

declares the Lord, the Lord Almighty.

5 The waters of the river will dry up,

and the riverbed will be parched and dry.

6 The canals will stink;

the streams of Egypt will dwindle and dry up.

The reeds and rushes will wither,

7 also the plants along the Nile,

at the mouth of the river.

Every sown field along the Nile

will become parched, will blow away and be no more.

OK, so you got your Muslim Brotherhood, they should be cruel enough, maybe. Add in some drought and plague -- hey, there's a biblical reason to ignore global warming, too! -- and everything's good. Once God has made Egypt sufficiently miserable, it will see the error of its way and worship Him in an appropriately Old Testament way:

18 In that day five cities in Egypt will speak the language of Canaan and swear allegiance to the Lord Almighty [...]

Now, obviously, we should totally wait until Egypt converts to Orthodox Judaism before we send any helicopters out to scoop up the Kurds for territorial redistribution. They may object, but we'll just tell them we have this book that explains the whole thing, and then they'll probably be cool with it.