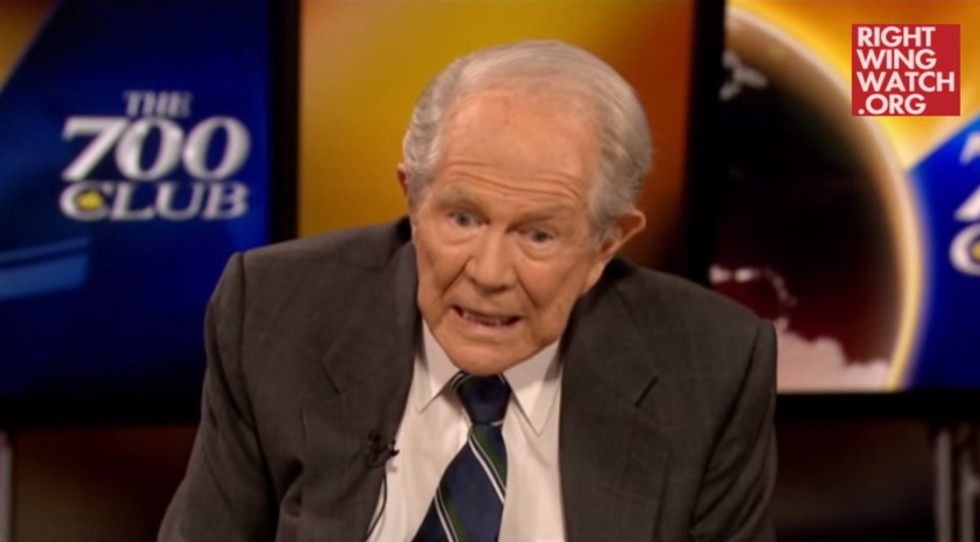 We figured televangelist scamster Pat Robertson would have been raptured by now, what with the Gaypocalypse and all. But nah, he is making words, still, on the teevee, with his 213-year-old senile talking hole. Sure, they are mostly nonsense words, because of how he is 213 and also senile. That's why he always has a hapless lady sidekick to explain his answers to the viewing audience at home, like when he says he raced his sports car in the mountains at TWO hundred miles per hour, and the sidekick nervously laughs and says he probably means ONE hundred miles per hour, ha ... ha ... ha ... and holy sweet fucking Jesus, she's thinking to herself, this job sucks.

Here are some words Robertson recently said to "Thomas," a "viewer" who "wrote" his concerns about abortion and using fetal tissue for medical research and "How could this kind of sociopathic hypocrisy possibly be legal?" Robertson, noted legal expert, responds by saying "Roe v. Wade" and shaking his head in wonder that the Supreme Court has come up with "these strange rules," and some other words, la la la, stumbling senile old man talking crazy talk, and then -- jackpot!

Pat, buddy, hate to break it to you, but it's already happened. Allow us to introduce you to Jonathan Edward Medley, of Alabama, who was recently arrested and charged with animal cruelty, for fucking his wife's dog. The missus paid too much attention to her dog, in his opinion, and not enough attention to him, so he FUCKED HER DOG, to teach her a lesson. That was before the Supreme Court ruled on marriage equality, bee tee dubs.

Not convinced? How about this guy, who went to see a man about a horse, so he could fuck it? And he would have gotten away with it, too, if the whole thing hadn't turned out to be a real mean trick by the Maricopa County Sheriff's Department, where apparently there is an epidemic of horsefucking that must be stopped. No word on whether he was a congregant of Raymond Bell's Cowboy Church of Virginia, where you can learn how to ungay yourself, by fondling a horse. FOR JESUS.

It's not just the four-legged fuckholes, though, that people have been doing sex to, even before the Supreme Court gayed up America. There's this Florida Man, who fell in interspecies love with a saucy girl dolphin named Dolly, in the 1970s, before the Supreme Court had even decriminalized buttsex. (Do dolphins have butts? Unsure. Will Google later.) Still, that was straight up hetero sex that guy was doing to that dolphin, you cannot blame the Supreme Court or the gays for that one, Pat.

Also, Sen. Thad Cochran, from the sick state of Mississippi, used to do "all kinds of indecent things with animals," when he was growing up on the farm. He's gross. Go ahead and judge him all you want.

It's not just "love affairs" (how adorably old-timey quaint, right?) Robertson wants us to watch out for. There will be polygamy too, probably, which is maybe worse than fucking animals? (Note to selves: Look that one up when we Google dolphin butts.) Sadly, though, there's nothing we can do about it because -- go on, Pat, tell us the because:

We are stuck with a fixed doctrine of five old men on the Supreme Court. Five men with black robes, they're not all old anymore.

Aaaand we're out of time, folks, time for Pat to take a nap, and for his haplesss lady sidekick to hit the bottle.